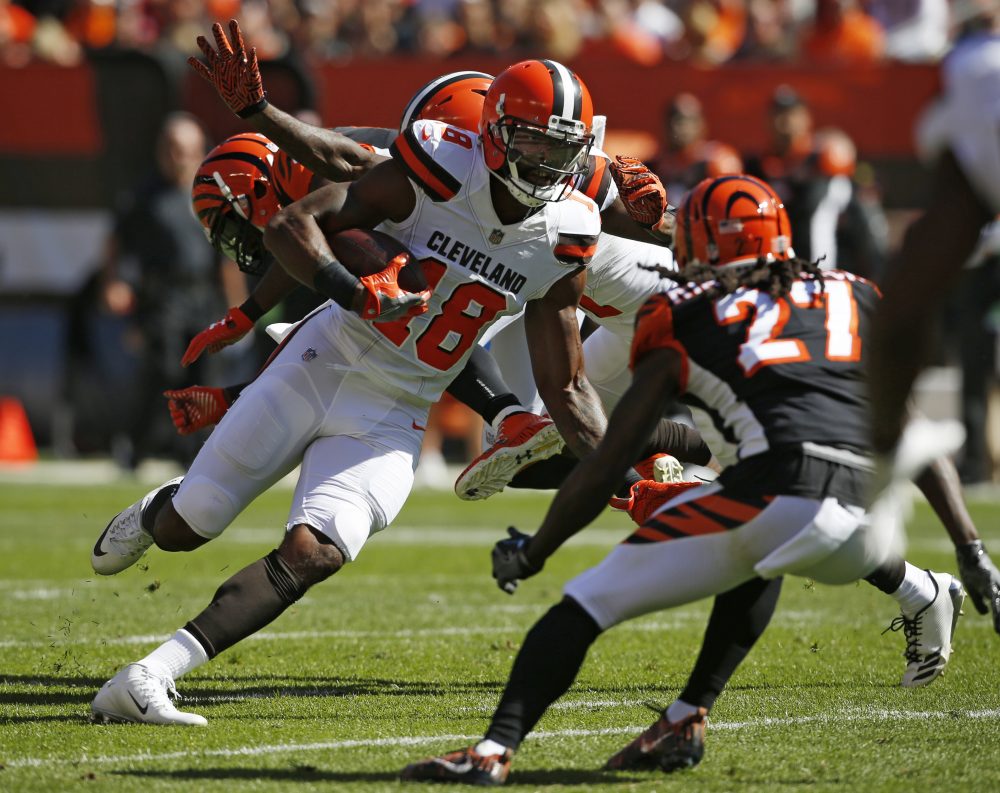 Coach Hue Jackson didn’t play a healthy and active Britt on Sunday in a 33-16 loss to the Minnesota Vikings in London but said Monday that Britt has a place on the team.

“Yeah, there’s a spot for him on this roster,” Jackson said on a conference call. “I’ve played Kenny. Most games when he’s healthy, he’s been out there, he’s been a starter.

“I just thought yesterday I just wanted to do something different, as I told him. I was very honest, and we played Bryce Treggs a little bit more yesterday ’cause I wanted to get a good feel for him in the game. So that’s what it was.

“But is there still a place for Kenny Britt? There is.”

Britt has been a huge bust in his first season with the Browns after signing a four-year, $32.5 million deal with $10.5 million guaranteed. He has 10 catches for 128 yards and a touchdown. He’s been active six times and missed two games with a groin injury.

Britt was sent home early from the trip to Houston two weeks ago — he was scheduled to be inactive with the injury — for missing curfew Saturday night along with injured second-year receiver Corey Coleman. Britt is the veteran in a young receivers group, but his ability to serve as a mentor has been questioned.

“If I knew that Kenny Britt was a negative influence on our football team, he wouldn’t be here,” Jackson said. “I mean, everybody is going to have some issues from time to time and obviously his are well-documented. There are some games he hasn’t played, and there are some games where things haven’t gone as well. But hopefully those things are not bleeding over into our locker room, because I would not allow that.”

Jackson said he was unaware of comments Britt had made to ESPN.com before the trip ripping his previous trip to London. He said he hated London “with a passion.”

Jackson started Drango against the Vikings because he didn’t want to disrupt multiple positions on the line following Thomas’ stunning season-ending torn triceps tendon. Jackson planned to re-evaluate during the bye week but will stick with Drango for at least one more game, Nov. 12 against the Lions in Detroit.

“Spencer did a great job. He battled and battled hard,” Jackson said.

“We did some chipping, some slamming over there to that side,” Jackson said. “We did some things left-handed a little bit.”

Drango’s teammates were impressed with Drango, and quarterback DeShone Kizer was appreciative.

“Spencer Drango played his butt off,” Kizer said after the game.

Griffen got a sack for the eighth straight game and has 10 for the season. He said Drango played well.

“He had a good game plan going up against me,” Griffen said. “He was worried about my spin the whole game, but I hit him with the spin at the very end. So I was trying to beat him with speed, speed to stop and go, but he was sitting light on me the whole time.”

The Browns’ decision-makers are expected to meet during the bye. Jackson knows one item on the agenda.

“Obviously just our need to continue to get better at many different positions, and I think we all see it,” he said. “I think we know where we are headed. I like our roster a lot, but I think there is some upgrading that we can do and will do.

“We have to continue to look at the things that we think will make our team better overall from just a positional standpoint, and I think we will have those discussions here soon.”

The trade deadline is Tuesday at 4 p.m., and Jackson would like to see head of football operations Sashi Brown add someone, like he did last year with a surprising trade for Patriots linebacker Jamie Collins.

“I am sure we are working hard to do that now,” Jackson said. “We will do anything we can that is the right fit for us to upgrade our football team.”

No. 1 pick Myles Garrett is on the “back end” of the concussion protocol, Jackson said. Garrett didn’t travel to London after suffering a concussion in the previous game.

“There are different processes that they have to go through, but I think we are getting close to the end of that,” Jackson said.

** Coleman, who’s on injured reserve with a broken right hand, is eligible to practice and could return to games Nov. 19 against Jacksonville.

“He is making really good progress, but he needs to get back on the field. It might not be for a couple more weeks, but we should have him practicing soon,” Jackson said.

** Defensive back Briean Boddy-Calhoun suffered a hamstring injury Sunday and may not be ready following the bye.

Thomas wrote a guest column for si.com Sunday about watching the game from home for the first time in his career. He wrote he hasn’t thought much about if he’ll return for a 12th season.

“Part of me says, ‘I don’t want to go out like this. I want try to do the Jerome Bettis,’” Thomas wrote, referring to retiring after a Super Bowl win. “But the other part says, ‘No way you can make a smart decision about that now.’”

Thomas wrote that his wife was in London and attended the game because the trip had been planned for a while.

Jackson gave the players Monday off following the long flight back from London. They will practice Tuesday, and he planned to give them the rest of the week off.

“We need to take this bye week and heal up, take a little time away and get our minds right,” he said.

** Jackson said the organization will decide whether to give rookie kicker Zane Gonzalez the chance to work through his struggles or replace him. Gonzalez missed a 33-yard extra point and a 35-yard field goal Sunday. For the year, he’s 7-for-11 on field goals and 12-for-13 on extra points.

“We don’t want to be on a roller coaster,” Jackson said.

** Rookie running back Matthew Dayes, a seventh-round pick, had a 71-yard kickoff return filling in for Peppers. He had three returns for 105 yards.