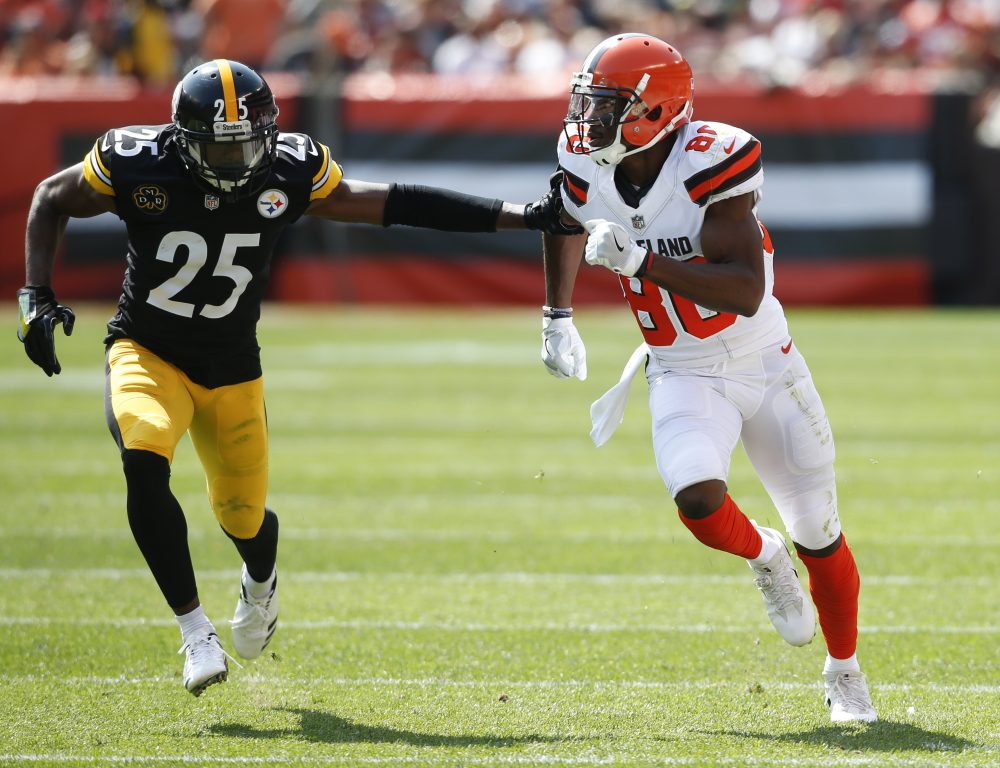 Q: Inasmuch as it is probably the team’s weakest positional unit, why not assess and analyze the components comprising the Browns’ WR unit?

A: I know you’re looking for individual evaluations, but I’ll start with an obvious overview: The receivers aren’t nearly good enough.

Kenny Britt can get open and is a physical presence, but he’s unreliable on and off the field. Corey Coleman has speed and potential but doesn’t have ideal size or hands and has missed too much time with injuries. Ricardo Louis is big, strong and fast but has too many drops.

And those are the best of the bunch. (I’m not including Josh Gordon until I see him play in a game.)

Bryce Treggs has big-time speed but is only 6-foot, 185 pounds. The Browns have used him on the outside and he’s been a non-factor, so I’d like to see if he can get open from the slot.

Rashard Higgins lacks strength and speed and can’t consistently get open. He’s had some success playing in the slot but isn’t quick enough to survive there.

Kasen Williams isn’t fast enough to separate and has dropped too many balls for a slow receiver. Sammie Coates is fast … and that’s it.

Q: We didn’t get Jimmy Garoppolo. We screwed up on AJ McCarron. And nothing’s been written about it, but Kelvin Benjamin was traded for nothing. Can you please explain to me how Sashi Brown is keeping his job? Based upon what he has accomplished, the only role he is qualified for is a weatherman (they are never right but they always keep their jobs).

A: The quick answer is he sold owners Jimmy and Dee Haslam on a long-term rebuilding project and is less than two years in. But that doesn’t mean Brown will be safe after the season — or sooner, if the Haslams find a replacement.

I believe the Browns are better off without McCarron — second- and third-round picks are too much to give up for him — but if Brown agreed to the deal and couldn’t execute it, he should be held responsible.

Coach Hue Jackson demanded improvement of the roster throughout the first eight weeks and at the trade deadline, and Brown failed him.

Q: Please explain the rationale behind the NFL’s not permitting Josh Gordon to practice immediately and play sooner than Dec. 3. I get that they may not want him accruing a full season of service time via the minimum six games; but this seems additionally punitive to the Browns, who need all the help they can get as soon as it can be gotten.

A: I think you hit the nail on the head with the service time. The Browns get a break if Gordon isn’t credited with a season and remains under their full control for 2018 and doesn’t become a restricted free agent until after 2019.

Plus, Gordon was close to returning last year when he left for rehab. It makes sense to give him a few weeks to get acclimated and see if he stays.
Q: What possible justification can Hue Jackson generate for not having done a Marty Schottenheimer and focusing this year’s approach to a strong running game, so as to maximize the OL expenditures, burn clock, rest his D, keep pressure off his dubious QB collection, assure the installation of at least a fundamental offensive foundation and make all other offensive variations all the more effective?

A: I know plenty of people share your opinion, and I can’t argue too much when the Browns rank 25th with 23.4 rushes per game.

However, and I hope to further examine this point in an article soon, Joe Thomas made an interesting point when asked about the subject. He said in order to win in the NFL in 2017, a team must have a strong passing game. So while Jackson may be sacrificing some success — or at least closer losses — in the short term, he’s trying to develop a passing game that can win games down the road.

When you also factor in the large deficits the Browns have faced and opponents focusing on stopping the run, I let Jackson off the hook for not running more.

Q: Do you agree that it would be premature to move on from Zane Gonzalez?

A: Yes, I do. I would feel differently if the Browns were contending for a playoff spot or Gonzalez weren’t a rookie. But because the season is a lost cause, I’m fine with seeing if Gonzalez can establish some consistency over the final eight games.

Having said that, I don’t absolve Brown for keeping Gonzalez instead of incumbent Cody Parkey at the end of the preseason. In two seasons, Brown has shown way too much ego in keeping his draft picks, and Gonzalez was only a seventh-rounder. Parkey had a resume in the league and was better in the training camp/preseason battle. To prove the point, Parkey is 8-for-9 on field goals this year for the Dolphins, with the only miss from 50-plus yards.

Q: Who is solely to blame if we go winless this year? And would it result in that person getting the axe?

A: It would be so much simpler if only one person were to blame. Instead, everyone bears responsibility for this disaster. That will make the decisions much messier after the season.

This much is clear, to me at least: If the Browns go winless or 1-15, everyone is getting fired.

Q: I mean this seriously. Can these 2018 draft picks be trusted with this current Browns front office?

A: I raised this question in training camp after Jimmy Haslam talked about his confidence in the front office, and I was berated by fans for being too negative.

Three months later, the point remains just as relevant. Brown has gotten too little out of the 24 draft picks the last two years, and there’s no reason to believe he’d be better with a third chance.

The 2018 draft will once again be the most important in team history, with five picks in the first two rounds. If Brown is fired after the season, not trusting him to make those selections would be the primary reason.

Q: Your choice: Sam Darnold via draft or Kirk Cousins for next season?

A: I haven’t seen enough of Darnold to make an informed decision. But in general I prefer the idea of going with a high draft pick, as long as you believe in that rookie.

Q: After @joethomas73 retirement talk, how caught off guard were you by his new contract? If at all?

A: I was caught off guard by the $3 million raise, particularly because of the timing following his season-ending triceps injury. But the team and Thomas had talked about the adjustment before the injury, and the Browns followed through.

It feels like a good PR move for the Browns, and perhaps the $1.5 million addition to his 2018 salary will entice Thomas to put off retirement and return for at least one more season.

Mailbag: Offensive changes? What if? Why is Kenny Britt still on the roster?
Mailbag: Is a QB coming at the top of the draft? Why have they ignored WR? The next GM?