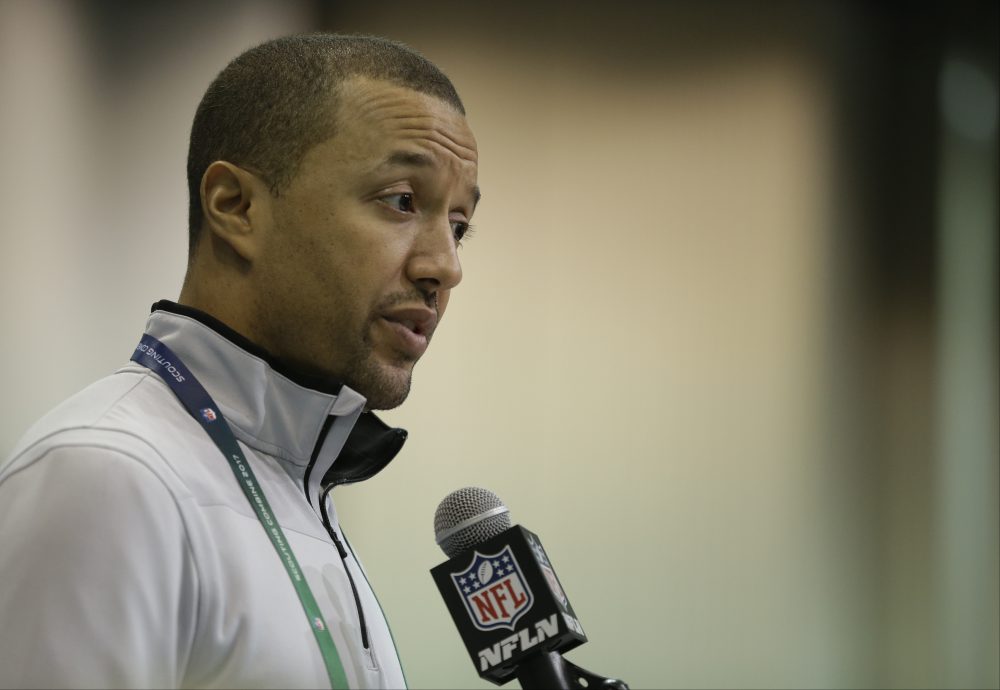 BEREA — The Browns traded the No. 2 pick in the draft in 2016, passing on the chance to take quarterback Carson Wentz in favor of extra picks. He leads the NFL with 23 touchdown passes.

The Browns traded the No. 12 pick this year, passing on the chance to take quarterback Deshaun Watson in favor of extra picks. He is second with 19 touchdown passes but is out for the year after tearing an anterior cruciate ligament last week in practice.

The first signature move of the new regime led by Brown was to bypass Wentz, and chief strategy officer Paul DePodesta said the organization didn’t think he was a top-20 quarterback. In just his second year, he’s a favorite to be league MVP for the 8-1 Eagles.

“Listen, we never walk away feeling like it’s OK in terms of that’s something we planned to do,” Brown said. “But we also have to be professional enough and realistic enough to know that’s going to be part of it. Those are the things that you learn from in all honesty and you’ve got to be accountable to them and go back and take a look at it.”

Brown said good organizations study their decisions and evaluations to see what they missed.

“We’ve got some really good processes in place. I’m pleased with the guys we have pulled out of the draft. I think that they’re performing, almost to a man, but at the end of the day, we always can get better and we’ll always look to get better certainly, including at the quarterback position.”

Brown isn’t beating himself up for passing on a pair of potential franchise quarterbacks. He said misses happen in the draft and across the NFL.

“We will solve the quarterback position here.”

The Browns have five picks in the first two rounds next spring, and Brown also mentioned free agency as an avenue to address the position.

“We will get it right,” he said. “It doesn’t mean we’re going to get every, single one right, but we’re confident of where we’re heading and the group that we have here in place.”

Brown wouldn’t answer when asked if the Browns are talking to Peyton Manning about a position with the organization. He reportedly was in town recently.

“You shouldn’t read into it one way. Even if we were, we wouldn’t comment on it here,” Brown said.

Because Brown’s background is as a lawyer and DePodesta’s as a baseball executive, many people believe the Browns should add someone with a more traditional football background to the top of the personnel department.

“We have football people here,” Brown said. “We’re always looking at our staff to figure out where we are, but really pleased with the job that the guys have done.

“If you look at the players we have selected and how early they’re performing and performing well, then I think you can see that this group can evaluate.”

One of Brown’s signature moves of free agency was signing receiver Kenny Britt to a four-year, $32.5 million contract with $10.5 million guaranteed. He’s been a bust, catching 10 passes for 128 yards and a touchdown.

“The reality of free agency is when you’re a wide receiver that’s a starting wide receiver in this league and you hit free agency, you’re going to get paid,” he said. “And Kenny has, you know, eight more opportunities this year and future years on his deal to come around.

“We haven’t been obviously, from his perspective or ours, where we expected to be with his performance, but he’s working hard and he’ll continue to. And so I think that is the reality and dangers of free agency. My sense is that Kenny will work to turn it around here in the second half.”

Receiver Corey Coleman practiced for the first time since breaking his right hand Sept. 17 against the Ravens and led the receiver drills. He’s been designated to return from injured reserve and is eligible to play Nov. 19 against the Jaguars.

“He looked fast to me,” Jackson said. “He could catch. He can run. Sometimes you forget how talented he is because he hasn’t been out there in awhile, but it was good to have Corey back out there.

Brown explained the $3 million raise given to left tackle Joe Thomas last week despite a season-ending torn triceps. Thomas got a $1.5 bonus this year, with $1.5 million added to his salary for 2018. The team had discussed the move before the injury.

“Thought it was the right thing to do by him,” Brown said. “He’s been a warrior. He obviously has played at a very high level for a very long time and he represents a tremendous amount for this organization.”

** The Browns are sticking with rookie Zane Gonzalez despite him being 7-for-11 on field goals. Jackson said they didn’t bring in kickers for workouts during the bye.

Notes: Hue Jackson says “there’s a spot” for Kenny Britt despite being benched Sunday
Notes: DeShone Kizer focused on start vs. Lions, rather than attempt to replace him