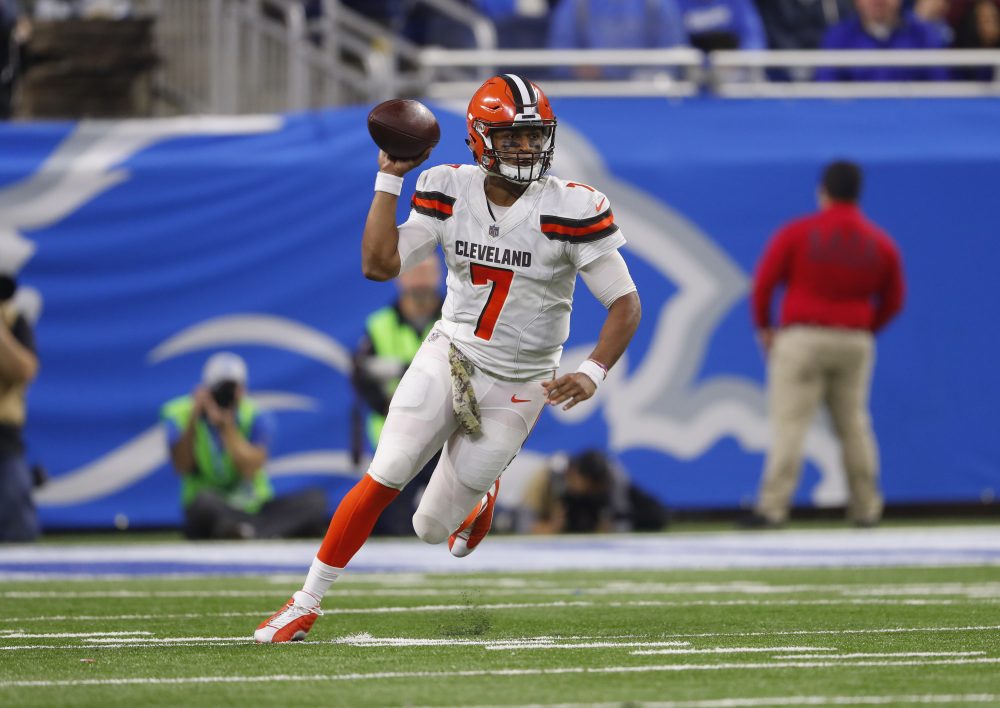 BEREA — Jaguars free safety Tashaun Gipson hopes Browns quarterback DeShone Kizer tests him Sunday at FirstEnergy. If he goaded him into it by taking shots at the Browns in the media, even better.

“For my sakes, I hope that DeShone Kizer marks me and says he’s going to throw toward me or at me as much as possible,” Gipson said Wednesday on a conference call. “If it means more (opportunities) and if it means that they want to make me look bad, I never shied away from no challenge and I’m a confident person, so I’m going to be ready for sure and know my guys got my back over here.”

He had done his research on Kizer, who’s thrown a league-high 12 interceptions, including three to Titans safety Kevin Byard on Oct. 22. Gipson has three interceptions this season and considers himself a ballhawk.

“I wouldn’t mind having a game like the safety from the Tennessee Titans did,” he said. “Hopefully he can gift a couple of them like that. I wouldn’t be too mad, and we’d come away with a win for sure.”

Kizer spoke to reporters before Gipson’s conference call. But he saw the comments Monday in which Gipson predicted a shutout and blowout win.

“I don’t know what type of guy he is, but I look forward to going out there and executing my job to try to prove him wrong with those comments,” Kizer said. “There is no discussion needed other than the fact that we are 0-9 looking for our first win.”

Kizer was listed as limited on the injury report with bruised ribs that knocked him out of the Lions game temporarily, but coach Hue Jackson said he practiced and looked fine.

“Feeling better. I got a bunch of treatment, and things are looking well,” Kizer said.

Kizer wore a white, long-sleeve Miami Hurricanes T-shirt to pay off part of his bet with tight end David Njoku in the battle of alma maters.

“The ribs, the benching and all of that stuff, this is by far worse,” Kizer said with a laugh.

“He looks really good in it,” Njoku said.

He said Kizer has to wear the shirt all week and made the “U” with his hands to honor Miami. Kizer wouldn’t reveal the rest of the bet. He did say he owes running back Duke Johnson, another Miami alum, a pair of tennis shoes.

Kizer and Njoku are close friends and roommates on the road. They watched the first half together.

“I went up to our hotel room and locked the door to make sure that he wasn’t watching the second half with me,” Kizer said.

Right tackle Shon Coleman remained in the concussion protocol after leaving the game Sunday in Detroit. The hope is he’s cleared in time to play against the Jaguars.

If not, the Browns would have to add a tackle. Left tackle Spencer Drango and Zach Banner, who would replace Coleman, are the only other tackles on the roster.

Center JC Tretter didn’t practice and was listed on the participation report with shoulder, knee and quadriceps injuries. He worked on the side with trainers.

“We will know more about those guys as we go through the week. Hopefully, we will get them back,” Jackson said of Tretter and Coleman. “I think we will have an opportunity to get them both back.”

The Browns promoted linebacker Deon King from the practice squad. He fills the roster spot that opened when Jamie Collins was placed on injured reserve Tuesday with a torn medial collateral ligament in his right knee.

King appeared in four games this season for the Browns before being waived and re-signed to the practice squad.

** Running back Terrence Magee was signed by the Falcons to their active roster from Cleveland’s practice squad.

** Running back Josh Rounds was signed to the Browns’ practice squad. He’s an undrafted rookie out of Tulane and spent time on Chicago’s practice squad.

Notes: Jaguars safety Tashaun Gipson goes off on former team, expects it to go 0-16
Notes: Josh Gordon on track to practice next week; Hue Jackson says he’s been a “pleasure”