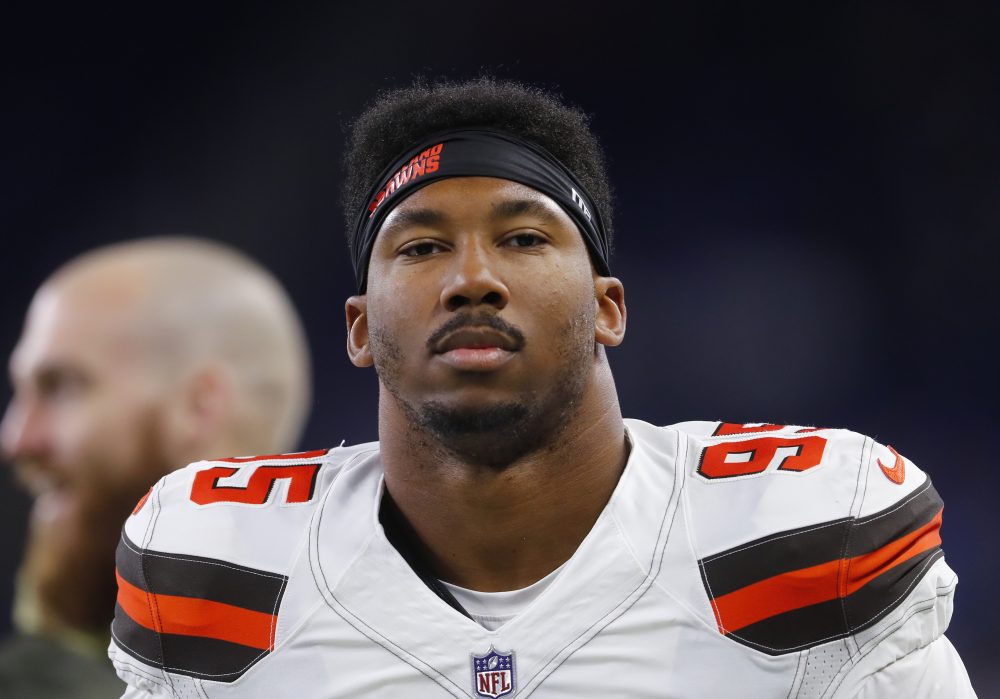 BEREA — Coach Hue Jackson isn’t satisfied with the pass rush. The Browns are in the middle of the pack in the league in sacks, tied for 18th with 20, and Jackson wants more.

“We have to make these quarterbacks uncomfortable,” he said. “We had some sacks and we had some pressures, but we did not truly affect the quarterback the way we think we can with the personnel that we have.”

His defensive ends took it personally.

“We want to intimidate (quarterbacks), we want to get guys who are thinking about us and not the routes downfield,” rookie right defensive end Myles Garrett, the No. 1 pick, said Friday. “And then once he starts thinking about that, he’ll throw a couple up to the DBs who can make plays and take it the other way.”

“We need to produce more sacks,” he said in advance of Sunday’s meeting against the Jacksonville Jaguars. “I was drafted here to come get some sacks and Myles was drafted to get sacks. I know he’s been limited, but we have to do a better job getting after the quarterback.”

Garrett and Ogbah share the team lead with four sacks apiece. Ogbah had two Sunday in the loss to the Lions, while Garrett came up empty for the first time in his four games.

“Oh, yeah, it stings,’ he said of being shut out. “You always want to not only be disruptive and get after him every single play with pressures but you want to get sacks, you want to get TFLs, things that amount to third-and-13 and can set up the offensive score.”

The Garrett-Ogbah tandem is a reason for fans to be excited about the future. Both are young. Both have already flashed — Ogbah led the team with 5.5 sacks as a rookie despite playing out of position in the 3-4 scheme of former coordinator Ray Horton. Both believe they’re not close to reaching their potential.

“I feel I can grow each week,” Garrett said. “Just mentally, making sure I see keys from the linemen and make sure I slow down the game. So just going through game by game and finding those skills and those attributes, I feel like the sky’s the limit.”

“Big, athletic, has good power, good speed, good against the run and the pass,” Jaguars coach Doug Marrone said. “Probably is going to be one of the most premier players in this league the more he keeps playing.”

Coordinator Gregg Williams returned Ogbah (6-foot-4, 275 pounds) to his natural position of end and has raved about his work for the team’s fourth-ranked rush defense and as a pass rusher.

“I still have a long way to go,” Ogbah said. “I’m working on being better.”

The goal is to have two dominant ends so the offense can’t focus its protection to one side. Williams also likes to blitz a fifth or sixth rusher to ensure the ends aren’t both double-teamed.

“It’s not like you can double off on him or double up on me and leave one of us just man-to-man, because we’re basically going to break free and make a big play,” Garrett said.

“Our main goal is to meet in the backfield together,” Ogbah said.

The individual competition is to see who reaches the quarterback first.

“It’s always a race and who’s going to get there,” Garrett said.

He was early to jump and late to reach quarterback Matthew Stafford last week, which is no way to dominate.

Garrett was penalized twice for jumping offsides. The same happened against Tennessee in his previous game.

“You want to make the play so bad, but you’re not listening to the call or their call or what they’re saying and knowing that at this situation they need an offside to put them back in range or give them that extra oomph,” he said. “But you always have to come off hard every single snap, it doesn’t matter whether they’re trying to draw you offsides or not, you just have to make sure that you’re moving on first movement, not on first sound.”

Garrett applied the pressure on Jamie Collins’ first-quarter interception but lamented his inability to take down Stafford.

He’s familiar with this week’s matchup after facing Jacksonville rookie Cam Robinson in the Southeastern Conference. Garrett played for Texas A&M and Robinson, the No. 34 pick, for Alabama. In three meetings, Garrett had a sack and 5½ tackles for loss.

“We go back and forth,” Garrett said. “He’s a competitor. He’s an athlete, and the same can be said about me. It should be entertaining to watch on both sides. I’m just going to try to get after him and win as much as I can.”

Corey Coleman’s back and raring to go, and Browns expect immediate impact
Ground and pound: As weather turns and Jaguars arrive, focus shifts to running and stopping the run