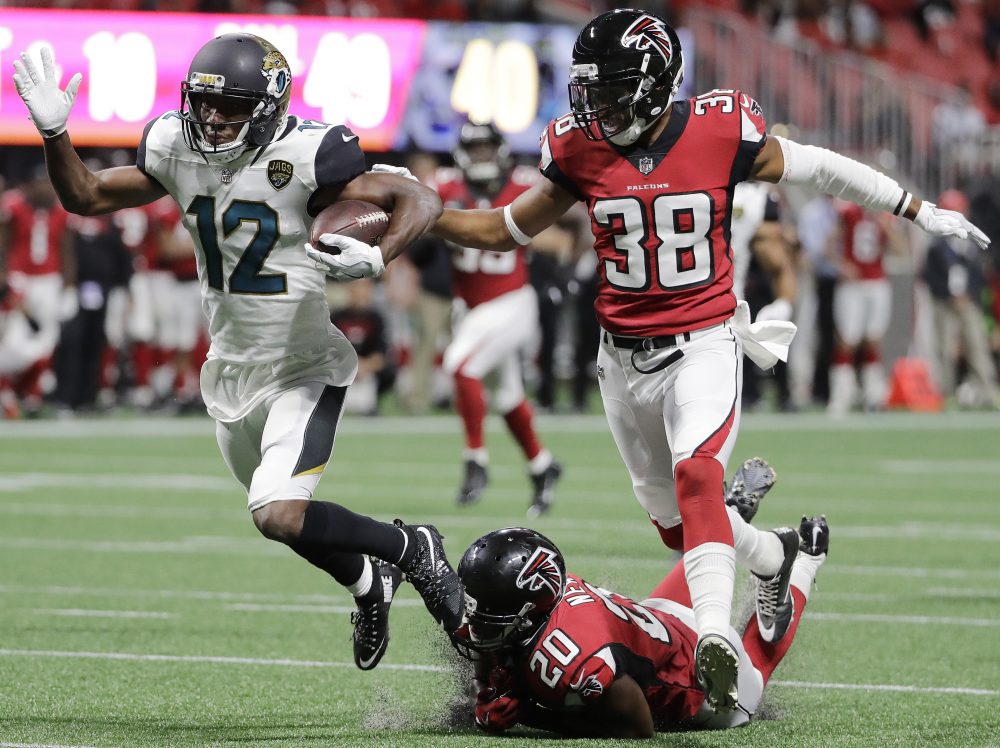 BEREA — The Jacksonville Jaguars have talked a good game this week.

Free safety Tashaun Gipson started things Monday by ripping the Browns front office, predicting an 0-16 finish for his former team and calling for a 40-0 win Sunday at FirstEnergy Stadium.

Rookie receiver Dede Westbrook followed suit later in the week, saying he expected to have 200 yards. It will be his first game after missing the first nine with a core injury.

“For me — and this has nothing to do with the Browns at all — but my expectations is 200-yard receiving game,” he told SportsRadio 930 in Jacksonville.

Of course, he’ll be playing the Browns (0-9), who took the boasts in stride.

“Confident young rookie,” nickelback Briean Boddy-Calhoun said Friday. “I can say I think I want to go out here and have as many picks as I can, you know? We don’t pay attention to what people say, just pay attention to what people do, so we’ll see what happens on Sunday. Whether he gets 200 yards or not, we control that. We’ve just got to control that.”

“I don’t worry about trash talk and all that. I left that back in high school. I just play ball.”

Boddy-Calhoun was signed by the Jaguars last season after going undrafted. He was waived in final cuts and claimed by the Browns. He said the reunion will be special.

“Definitely. I’ve got a lot of friends on that team,” he said. “It’s going to be fun to play against some friends, but it’s a football game and I’m trying to win the game, so we ain’t going to be friends on the field.”

Boddy-Calhoun is playing a lot as a nickelback and safety but said the role doesn’t matter against his former team.

“I just want to play in this game,” he said. “I don’t care if you were saying, ‘Boddy, we need you to try to block every field goal or water every cup.’ Cool, let’s do it, I’m going to make sure these cups are nice and icy. Just tell me what you want to do to help me get this win against this team and I’ll do it.”

Right tackle Shon Coleman (concussion) and center JC Tretter (shoulder/knee/quadriceps) returned to practice Friday are expected to play Sunday. They were listed as questionable on the official injury report.

Tretter said he’ll be “good to go” after a “bunch of little” stuff happened to various parts of his body against the Lions last week.

Coleman participated in the glorified walkthrough and still needed to pass the final test from the independent neurologist to be cleared from the protocol and be able to play.

“The guys have been playing together all year,” coach Hue Jackson said. “To be back there playing again, that would be good for our football team.”

Taylor was also listed as questionable after tweaking an ankle Thursday in practice but is expected to play.

Punter Britton Colquitt ran onto the field to hold for an extra point against the Lions without a helmet.

“I got out there for the hold and the ref looks at me, the head ref, and he’s like, ‘So you going to wear a helmet today?’ and he’s laughing,” Colquitt said.

How does that happen to an eight-year veteran?

“I don’t want to say it was a surprise … but it was a quick touchdown and I had the little ski cap on and it’s real snug,” he said. “You just kind of just take off out there. But it was really a funny situation.”

The Browns had scored on a 19-yard Kenny Britt touchdown, catching Colquitt off-guard. After the alert from the referee, Colquitt ran to the sideline to find a suitable helmet. He came upon the offensive linemen, but their heads are too big.

“And then I see Kenny, of course, Kenny’s the guy that scores, but I wasn’t thinking like that. I was just thinking there’s a guy that’s about my size, I gotta grab his helmet,” Colquitt said. “So I grab his helmet, and I’m like, ‘I need this.’”

The drama wasn’t over. Britt’s helmet has a visor.

The hold was fine and the kick good. He said he later asked the referee what the penalty is for no helmet and he didn’t know.

Jaguars running back Leonard Fournette (ankle) didn’t practice Friday after being limited Wednesday and Thursday and was listed as questionable. He missed a game earlier this season with the injury, but the Browns expect to see the rookie who ranks seventh in the NFL with 629 rushing yards.

“Knowing what I know, he’s a competitor and he’s a tough guy and he’s always going to try to gut it out,” said defensive end Myles Garrett, who faced him in college. “If anybody’s going to stop him from going in, it’s probably going to be one of his coaches or trainers trying to keep him healthy for the rest of the season, but I know he wants to play as bad as anybody. So I’m expecting him to suit up and see 27 out there in the backfield.”

THAT TIME OF YEAR

Special teams coordinator Chris Tabor has always said the kicking game changes once the weather does. Sunday is expected to mark the change, with snow and cold in the forecast for FirstEnergy Stadium.

“I’m excited about the weather changing,” he said. “We called it the other day in the first day of meetings: ‘It is the first official day of return season.’”

The kickoffs that have been going deep into the end zone for touchbacks will need to be returned and covered.

The message was simple for rookie kicker Zane Gonzalez, who went to Arizona State.

“You have to hit your ball. Hit your line,” Tabor said. “Mother Nature might take it from there good or bad, but if you do a good job of striking the ball, you give yourself a chance.”

Cody Kessler will remain the backup quarterback despite being sacked three times in seven snaps against the Lions. Jackson said Kevin Hogan, the other option, is healthy after injuring his ribs Oct. 15.

** Running back Duke Johnson was fined $12,154 following an unsportsmanlike conduct penalty against the Lions. He slammed his helmet to the turf after DeShone Kizer’s failed quarterback sneak to end the first half.