Notes: Emmanuel Ogbah will have surgery, expects recovery to take 3-to-4 months 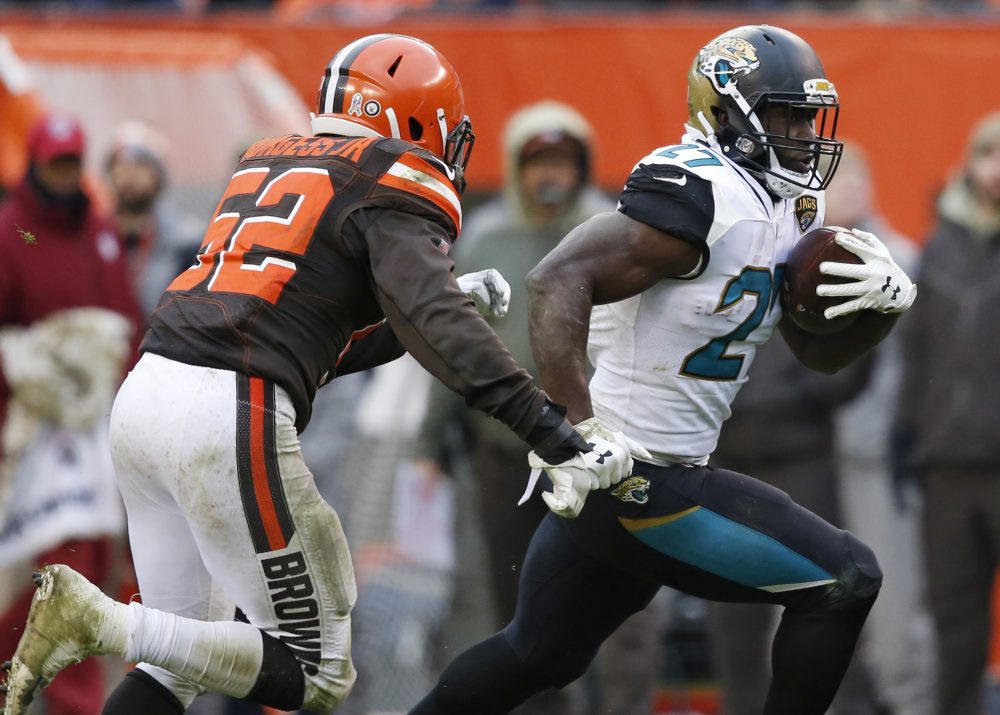 BEREA — Defensive end Emmanuel Ogbah rolled to the microphone stand with right knee bent on a scooter and broken right foot in a walking boot.

His next stop is surgery and a recovery of three-to-four months, which shows the severity of the injury.

“Injuries happen, but I’m going to come back strong so I’m not worried about it,” he said Monday. “Everything happens for a reason. I just have to keep my head up and keep working and hit this recovery process hard.”

“I kind of planted wrong when I tried to chase after the tight end,” he said. “I heard the pop. I played the next play and then all of a sudden, I felt a sharp pain and I knew something was wrong.”

Ogbah shares the team lead with No. 1 pick Myles Garrett with four sacks after leading the Browns as a rookie with 5.5. He added 29 tackles and six passes defensed in 10 games this year.

“I feel like I was doing a pretty good job out there. It was just unfortunate,” said Ogbah, who will be placed on injured reserve this week.

“Him and Myles are two great bookends to have,” left guard Joel Bitonio said. “They were both high picks and they both have shown flashes of excellence. He has done a great job.

“In the last few games, you saw that he can be a run stopper, which he has always been pretty good at. His pass rush has been coming along. He is definitely a core of this team.”

Coach Hue Jackson came under fire again after calling only 15 rushes against the Jaguars on a windy and cold day on the lakefront. In contrast, DeShone Kizer threw 32 times, was sacked five times and scrambled twice.

The Browns were within seven points for all but four minutes, but Jackson defended the decision to get away from the run.

“I get to look at the pictures. I get to see the matchups,” he said. “To a man, to a player, they would tell you we weren’t running the ball very well. We were making a yard here and a yard there. That wasn’t going to get us toward the end zone.”

Jackson said there were plays to be made in the passing game but they failed to capitalize. The Browns have thrown 379 times this year compared to 238 runs.

Jackson acknowledged as coordinator with the Bengals there were times he would stick with the run even when it wasn’t working.

“No doubt. Where you just be stubborn and you make it happen,” he said. “I didn’t feel that that was going to be the best way to get us a victory yesterday. In order for a play caller to keep running the ball, somebody better inspire the play caller to keep running, a runner, blocking, whatever that is. That wasn’t happening yesterday. So we did what we thought was best to give our team a chance to win.”

Kizer was downcast after the game, lamenting that for the first time in his rookie season he didn’t progress in at least one area. Kizer didn’t talk to reporters Monday as he usually does, but Jackson said he’ll bounce back.

“He’ll shake it off. He was good,” Jackson said. “He saw the corrections he has to make.

“I think where that comes from, there were some balls he missed, the ball’s thrown over a guy’s head and one ended up an interception. He knows that’s not a big-time quarterback play and that’s not who he wants to be. We have to fix those things.”

“The pressure doesn’t happen if he doesn’t get too deep,” Jackson said. “That’s the fundamental thing of catching and resetting and not taking a drop that you’re not supposed to take.

“I think that’s where his frustration came from. He did some things that he hadn’t done for a couple weeks. That’s the young player in him. That’s the guy that he has to continue to fight. That’s the consistency he has to have.”

Outside linebacker James Burgess continued his surprising season with a career-best and team-high 16 tackles, adding a sack and three tackles for loss.

“It was not enough,” he said. “We still didn’t come out with the victory. We still left a lot of plays out there, so I wasn’t too satisfied with that. I could have had three more sacks. I completely missed it.

“There is stuff to get better on. It is a good accomplishment but not satisfied at all.”

Burgess started in place of Jamie Collins, who’s out for the rest of the year with a torn medial collateral ligament. Burgess has started three of eight games and has three sacks.

“It does not put any stress on me. I can’t replace Jamie Collins,” he said. “He is probably one of the most talented dudes I have ever seen in my life with my eyes. That is not even in my thought process. You can’t replace a dude like that. All I can do is play as good as James Burgess can play.”

Defensive tackle Jamie Meder suffered a high ankle sprain and will likely miss at least a couple of weeks.

** Receiver Sammie Coates was injured when teammate Josh Keyes fell into the back of his left knee on punt coverage. The injury looked serious but Jackson didn’t have an update.

Notes: Emmanuel Ogbah breaks foot, out for rest of year
Notes: DeShone Kizer looking for a bounce-back vs. Bengals and more consistency in confidence, energy