Notes: DeShone Kizer looking for a bounce-back vs. Bengals and more consistency in confidence, energy 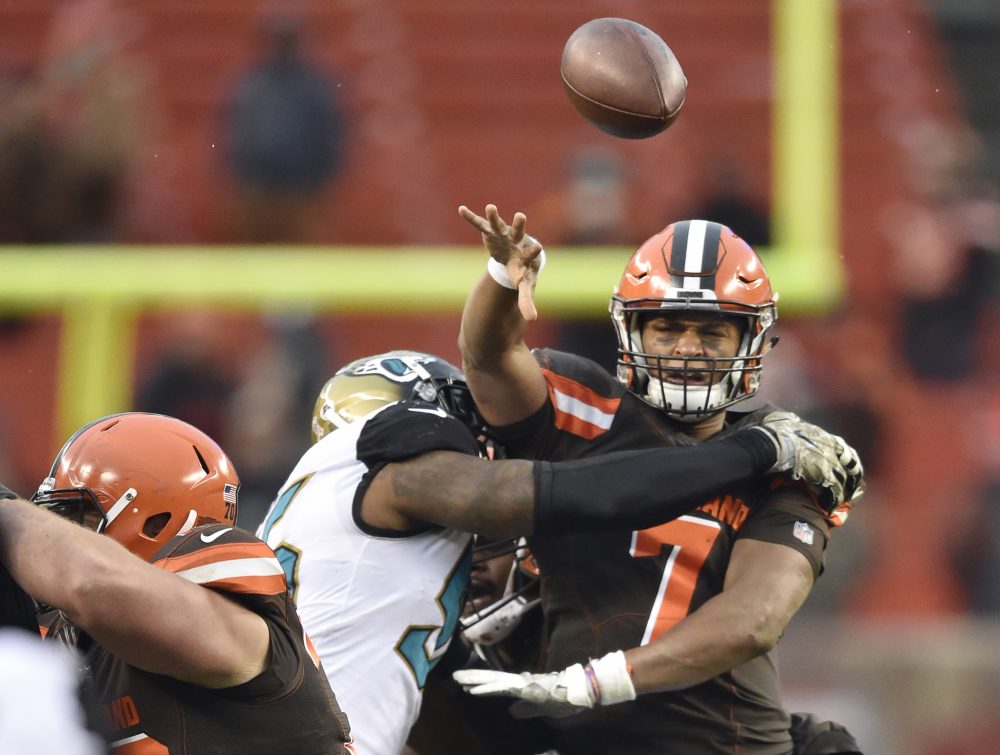 BEREA — DeShone Kizer has had more than his fair share of lows in his rookie season.

He’s been benched three times. Coach Hue Jackson tried to trade for his replacement during the bye week. He’s thrown the most interceptions (14) in the league and is last in completion percentage (52.5 percent).

In the minutes after the 19-7 loss to the Jaguars on Sunday, his mood bottomed out. Three of his four turnovers came in the fourth quarter with the Browns needing one touchdown to pull off the upset and get their first win. He said it was the first time he hadn’t developed in any area within a game.

Three days later he had a different view.

“I was quite emotional after the game,” he said Wednesday. “It was kind of an aggressive statement there.”

He even found some improvements in his 16-for-32 performance for 179 yards with a touchdown, two interceptions, two fumbles, five sacks and a 51.4 rating.

“I am still trying to build on the week before,” he said. “I was able to do that with my energy and my preparation that we had.”

Kizer said he remained “disappointed” in the outing, especially two passes that sailed over his receivers, one for an interception.

“Allowed some of the conditions to get to me there. I just can’t do that,” he said. “Those two balls cost us some prime opportunities.

“I have to make sure that I am locked in on every rep and that I have the proper grip on the ball and get the ball to the guy no matter what the means.”

Jackson wants more consistency from his quarterback in all phases, including sideline energy and leading the entire team. Jackson raved about Kizer in this area the week before against the Lions, when he started fast and played the best game of his nine starts. Jackson thought he took a step back against the Jaguars, which started with three-and-outs and an interception.

“I would hope that he understands that as the quarterback regardless of how the game starts, you just have to be consistent and you have to be who you are because the team kind of feeds off of you,” Jackson said. “I think he gets it. It is a conversation we have had. I don’t think he is doing it intentionally. I just think those things happen. There is no question when you have success early everything feels good. When you don’t, you are not sure how things are going, but that is when you really have to push through and have that focus about ‘I’m going to do everything I can to get it going my way by making the plays that I need to make.’”

Kizer’s psyche has been tested repeatedly. He said he needs to find a way to replicate the confidence he felt coming off the bye and heading into Detroit.

“I have to take that same preparation that I took for two weeks and condense that into one and have that confidence going into every week and hopefully play that well every time I step on the field,” he said.

Rookie free safety Jabrill Peppers (ankle) didn’t practice, working on the side with trainers. His availability for Sunday against the Bengals is uncertain.

“Hopefully we will get him back,” Jackson said. “Right now, he has to do some things in order to be out there this weekend.”

The Browns signed free safety Justin Currie on Tuesday as a contingency plan. He was with the Browns during training camp.

Defensive tackle Jamie Meder, a Parma Heights native, is bummed his season is over. He was placed on injured reserve Tuesday with a high ankle sprain.

“It’s the nature-of-the-business kind of deal,” Meder said. “I just knew something was wrong. It hurt a little too much than a normal little ache.”

Meder said he’d never had a high ankle sprain. He will rehab and “start lifting my upper body like crazy.”

Notes: Emmanuel Ogbah will have surgery, expects recovery to take 3-to-4 months
Notes: Jabrill Peppers looks for strong finish to season as he fights through pain, frustration