Notes: Jabrill Peppers looks for strong finish to season as he fights through pain, frustration 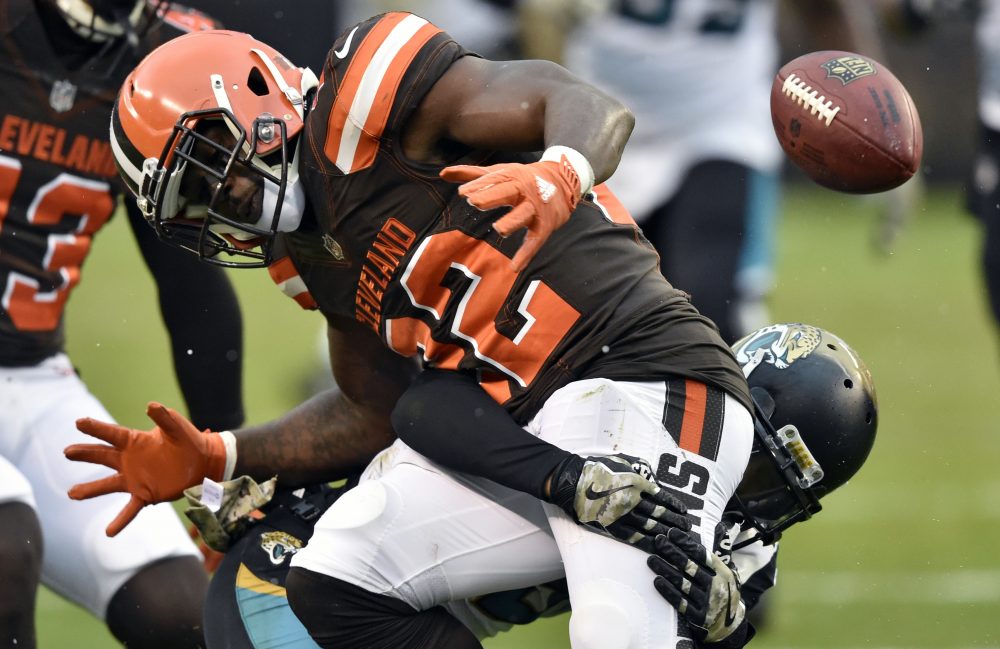 BEREA — Jabrill Peppers added two muffed punts and an ankle injury last week to the long list of trials and tribulations in his rookie season.

But he’s fighting through the pain and the frustration, especially of being 0-10, with the goal of breaking through Sunday against the Bengals.

“In this league, you are going to play hurt, especially in the AFC,” he said Friday. “It is getting late in the season. If your body is still feeling 100 percent, you are not playing the right way. That is not just how I feel. That is how everyone feels. Everyone is hurting right now, but we still have to grind out wins.”

Peppers, the No. 25 pick, didn’t practice Wednesday, returned Thursday and will play Sunday in Cincinnati. He ranks 20th in the NFL with a 5.6-yard punt return average on 23 attempts. He dropped two against the Jaguars, losing one.

“That game I was just trying to be more aggressive. I felt like I was fair catching a lot, too much,” he said. “So I was just like, man, just try to make a play. In doing that I was forcing (it). But I’ve got to definitely do a better job of taking care of the team and taking care of the ball.”

Peppers has started eight games at free safety and missed two with a toe injury. He has 32 tackles and two passes defensed but is without a sack or interception as he continues to struggle with the adjustment to life in the deep middle of the field.

“I love that I have to do this with him — I have to pull him back from shooting his gun too fast and too hard,” he said. “Instead of when a guy is not really tough and you are trying to get him to hit somebody, that is hard. Those are the ones we need to cut.

“Jabrill will get there. It is time on task. He is a very, very intelligent young man. We have something good there. We just have to continue to build on it.”

CHEERING FOR THE ENEMY

Peppers lost all three times he faced the Buckeyes but was hopeful the day before the renewal of the Ohio State-Michigan rivalry.

“I always have a feeling,” he said. “I wish I could go talk to the boys, but I have to handle things here. Home-field advantage definitely helps and maybe get some refs up there of our own this year.”

He was referring to a controversial call last season in which Ohio State quarterback J.T. Barrett was awarded a first down on a fourth-down run.

“He was definitely short,” Peppers said. “But that ref was from Ohio, there’s no way he can overturn that call and go back home. So I’m not mad at him, we still had a chance to stop them before that. That’s in the past, man. you guys are bringing back bad memories.”

Peppers doesn’t have any ex-Buckeyes on the Browns to talk trash with or bet.

“That’s kinda nice. I’m not complaining about that,” he said.

“Quietly, he has had a great year,” Tabor said. “He is our best player on our punt team.”

“I know that is a big term that I used the word Pro Bowl, but I do think he is that caliber of player,” Tabor said. “I think he is a special player.”

Tabor noted Cleveland is a tough place to punt and Colquitt has had to deal with several lineup changes on the coverage unit. He had his first touchback last week.

Running back Duke Johnson has been the team’s best playmaker yet played only 27 of 55 snaps (49 percent) in the 19-7 loss to the Jaguars.

“Last week, it fell into that cloth of we just did not have a lot of offensive snaps early on,” run game coordinator Kirby Wilson said. “We did not have a lot of conversions early on third downs, which leads to more opportunities. We would like him to be on the field as much as possible in all situations because we believe in him so strongly as a player and as a playmaker. That is up to us as coaches, me in particular, to make sure that he is always involved and always has a role in being on the field at all times or as much as possible.”

Johnson caught four passes for 56 yards, including a 27-yard touchdown, and rushed twice for 10 yards.

Tabor was blunt about the way his units played in the first meeting with the Bengals, a 31-7 Cincinnati win.

“I thought that they dominated us in the special teams area,” he said.

Adam Jones had a 40-yard punt return to set up a Bengals touchdown, Cincinnati’s Alex Erickson had a 44-yard punt return negated by a penalty and Browns kicker Zane Gonzalez missed a 48-yard field goal.

“We just have to go down there, play our best football and give ourselves a chance,” Tabor said.

The Browns caught a break last week when the Jaguars were called for being offsides after recovering an onside kick. Linebacker B.J. Bello and Josh Keyes, front and center on the return team, were lined up 15 yards from the line of scrimmage and their first movement was backward.

“They got us. Obviously, you can’t leave early,” Tabor said. “You just have to see the ball kicked. Can’t get caught leaning and anticipate those things.”

Receiver Sammie Coates (knee/ankle) was ruled out, and defensive back Derron Smith (knee) was listed as doubtful on the injury report.