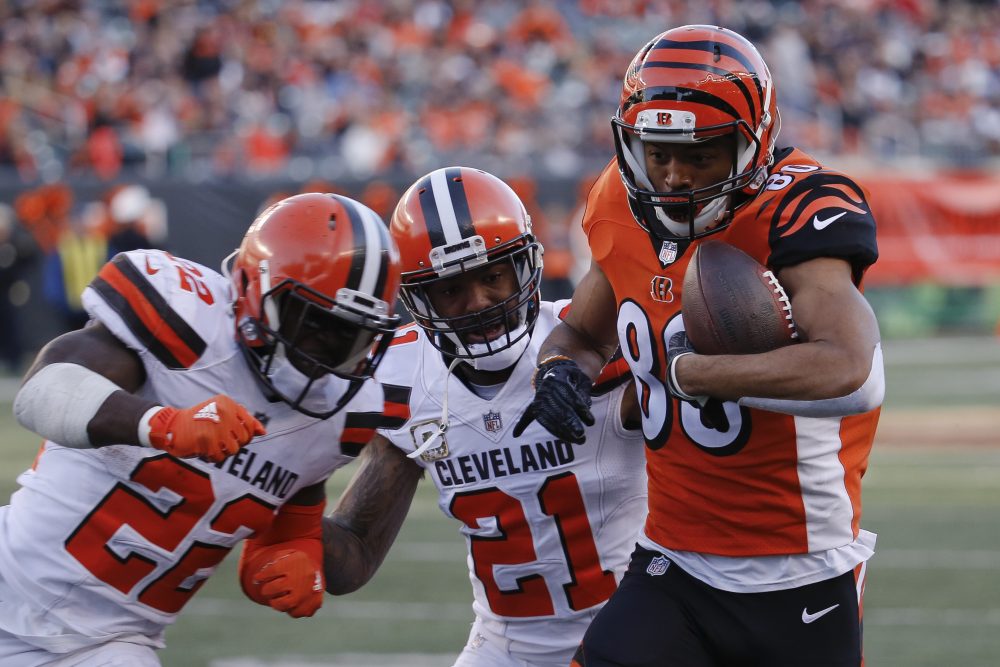 BEREA — Jabrill Peppers changed his tune regarding his pivotal unnecessary roughness penalty against the Bengals.

Peppers said he received the notification of the fine Wednesday night in an email from the NFL. He plans to appeal.

Peppers was penalized and fined for making contact to the head and neck area of Bengals receiver Josh Malone on Sunday. Peppers ran from the middle of the field to the sideline and knocked the ball loose for an incompletion, but his helmet hit the chin of Malone.

Minutes after the 30-16 loss in Cincinnati, Peppers said the official made the right call and it’s his responsibility to aim lower.

“I didn’t see the replay then, but when I watched it, I thought it was evident that I tried to go to the body,” Peppers said. “I don’t know where else I could’ve hit him at that would have dislodged the ball.

“I just feel like as defenders we’re at a disadvantage ’cause any kind of violent hit they flag. It’s not a contact sport. It’s a collision sport. I just think they need to do a better job of really making that judgment call or reviewing it or something, especially in crucial parts of the game. That call basically determined the game if you want to put it that way. So I’m a little upset right now. I’m not going to lie.”

Peppers, a rookie free safety, was so angry he didn’t read the email for an explanation.

“I actually just stopped reading the letter once I saw the number,” he said.

The fine confirmed the call was correct. Contacting a defenseless player in the head and neck area in any form is prohibited.

He thought Malone took a couple of steps before the hit.

“My question is, when does a guy stop being defenseless,” Peppers said. “It wasn’t as bang-bang as I thought, but at the end of the day, that’s not my call.”

FOR A GOOD CAUSE

Left tackle Spencer Drango proudly pulled the baby blue shoe from his locker to show reporters. It’s My Cause My Cleats week in the NFL, which allows players to promote a cause that’s important to them through specially designed cleats. 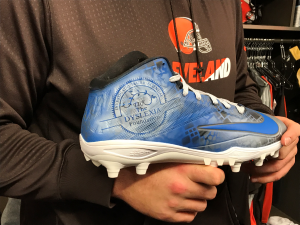 Browns lineman Spencer Drango will wear these shoes this week as part of the NFL’s My Cause, My Cleats campaign. (SCOTT PETRAK / CHRONICLE)

For Drango, it’s the Dyslexia Foundation. He was diagnosed with dyslexia entering the fifth grade.

“It was really challenging for me to learn English, language arts growing up,” said Drango, a three-time Academic All-Big 12 at Baylor. “It is just to raise awareness for it. It is more common than people think. Just because you have a learning disability of any kind doesn’t mean that you can’t overcome it and achieve anything.”

Coach Hue Jackson is taking the team to Los Angeles on Friday, a day early, to get adjusted before the game against the Chargers on Sunday. The players will be off Friday night and allowed to explore the city.

“It is really important when you take a trip like this is not to go put them in a hotel and treat them like they are inmates or something like that,” Jackson said. “I want to be able to trust our guys. But I make it crystal-clear what I expect and how it is going to be.

“Have a normal Friday night for themselves, but there is bed check and there is a next morning wake-up call.”

“We are obviously in a position where every game is the Super Bowl for us trying to get our first win. I think guys understand that,” he said.

GIVE ME ONE REASON

Jackson hadn’t decided on the backup quarterback for Sunday, adding Kevin Hogan and Cody Kessler have different strengths. Kessler has been the backup the past five games and really struggled in spot duty, so Jackson was asked to identify Kessler’s strengths.

“Cody has played more football for us,” he said. “His experience and being in the system, those are things that he understands.”

Kessler has taken four sacks in three-plus series in his last two appearances.

“He has been in some tough situations,” Jackson said. “Obviously, he wants to get the ball out of his hands. He hasn’t been able to do that. He has to improve in that area, there is no question about that.”

Safety Justin Currie was waived to make room on the roster for Gordon, who was activated from the commissioner’s exempt list. Currie played in his first NFL game against the Bengals.

Hayward left the team after his younger brother was killed in a car accident Monday in Georgia. He’s expected to play Sunday.