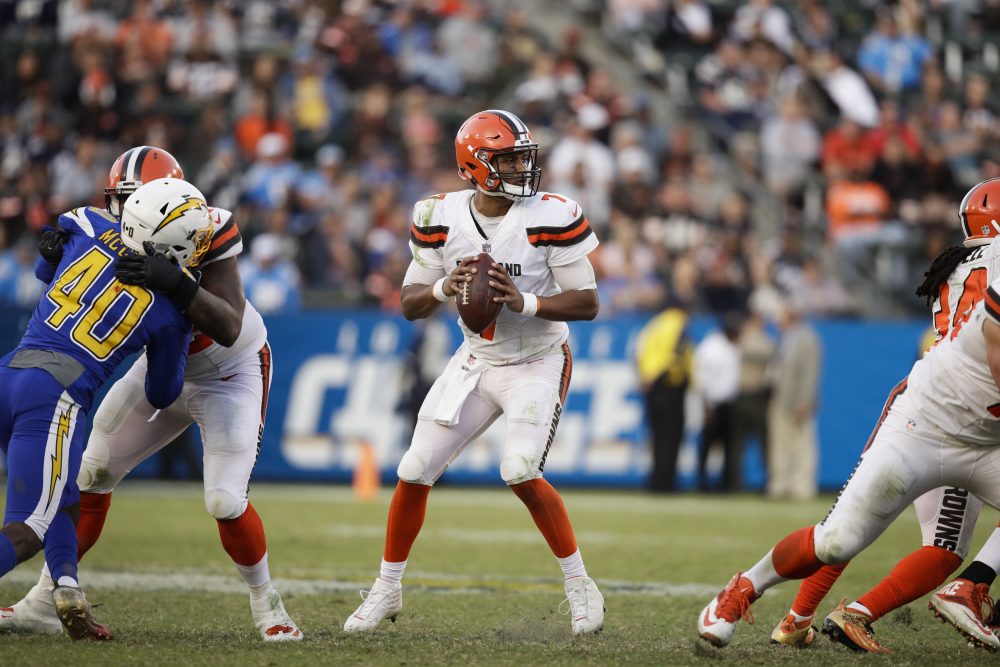 “You have to be sitting above 65 percent in this league,” he said Wednesday.

Kizer’s last among 35 quarterbacks at 52.5 percent and realizes the size of jump he’s trying to make.

“That is what it is going to take for us to get out there and win consistently,” he said. “As a quarterback, it is almost unacceptable to be at about a 50 percent completion rating. There are too many guys who are talented out there and there is too much time and effort that we put into the week for us to not go out there and complete at least 60 percent of passes.”

Coach Hue Jackson set the 65 percent goal. Kizer has completed 181 of 345 attempts, and would’ve needed 225 completions to be at the target — four more in each of his 11 starts.

“That is imperative for us to score more points,” Jackson said. “Guys have to get open, guys have to catch it when he throws it and he has to put it in the right spot more often than he has.

“He can do it. I truly believe he can. We can do it as an offensive unit, but we have to make sure that we are playing as well as we have all year because those numbers have been those numbers all year. They have not changed, so I am asking for more.”

Kizer hopes consistency at receiver over the final four weeks will help the completion percentage. Corey Coleman has been back for three games after missing seven with a broken hand, and Josh Gordon returned last week for the first time in nearly three years, so the wideout rotation should be set.

“To find some consistency now with a core group of really good receivers who are all playmakers, we will be able to maximize that as much as we can these last four weeks,” Kizer said of his accuracy. “Chemistry has been everything and timing has been everything for us. We have continued to put a lot of time and effort into that in practice.”

Outside linebacker Jamie Collins had knee surgery two weeks ago to repair a torn medial collateral ligament. He’s back with the team and walked through the locker room Wednesday with a giant brace on his right leg.

Dr. James Andrews performed the surgery in Pensacola, Fla., and the team expects a full recovery.

“Jamie’s recovery is going great, and he is doing well,” Jackson said.

Collins was injured when he was tackled after making an interception against the Lions on Nov. 12. He started six games — he missed three early in the year with a concussion — and finished with 31 tackles, a sack, two passes defensed and a forced fumble.

Packers outside linebacker Clay Matthews III said his dad will be in town Sunday to watch his son face his former team.

Clay Matthews Jr. played linebacker for the Browns from 1978-93. He was a four-time Pro Bowler and totaled 69.5 sacks, 27 forced fumbles and 16 interceptions in 278 games, but hasn’t made the Hall of Fame.

“The great thing about my dad is the fact that he is completely at peace with his career and how it played out — the fact that he wasn’t able to get to the Super Bowl, injuries or whatever you would like to speak on as far as what you go through throughout a career,” Matthews III said on a conference call. “I can tell you, the Hall of Fame is not something that he is lobbying for or something that is going to define his career. When you look at it statistically and look at some of these numbers he put up and the games he played, they are up there with some of the greats that are already in the Hall of Fame. Unfortunately, he played during those days when Cleveland had some down years, as well as a few of those years when they lost on ‘The Drive’ and ‘The Fumble’ and the Bills had some dominance, as well. I think a lot of that gets lost in the stack.

“As his son and obviously playing the game myself and having seeing his tape and his numbers, what he did was truly special.”

Right guard Kevin Zeitler was surprised but appreciated his teammates selecting him winner of the Ed Block Courage Award.

“It was cool. It was pretty neat that the team voted for me,” he said. “It was definitely an honor.”

Zeitler was given the award because he fought through a thumb injury in Week 1 that required surgery and time in a cast. He hasn’t missed a snap all season.

“When it happened, the biggest thing was I just wanted to be out there with the team and not let anyone down,” he said. “I showed them that I am here and willing to help and do everything I need to be out there.”

Free safety Jabrill Peppers (knee) worked on the side with the athletic training staff and didn’t practice, but Jackson said he was hopeful he’d be able to play against the Packers. He didn’t finish the second half Sunday against the Chargers.

** For the Packers, outside linebacker Nick Perry (foot/shoulder) and cornerback Davon House (shoulder) were among those who didn’t practice.

Westlake native Jake Ryan, a St. Ignatius graduate, is third on the Packers with 64 tackles, adding a sack, a forced fumble, a fumble recovery and a pass defensed. The starting inside linebacker has played 11 games.

“Jake has done a great job,” coach Mike McCarthy said on a conference call. “He is a little under the weather today. He has a touch of the flu. He has had some bumps in the road with some injuries, but he is a class act, an extreme professional and one of our distinctive core players.”

** The jersey left tackle Joe Thomas wore for his 10,000th consecutive snap was sent to the Pro Football Hall of Fame in Canton.