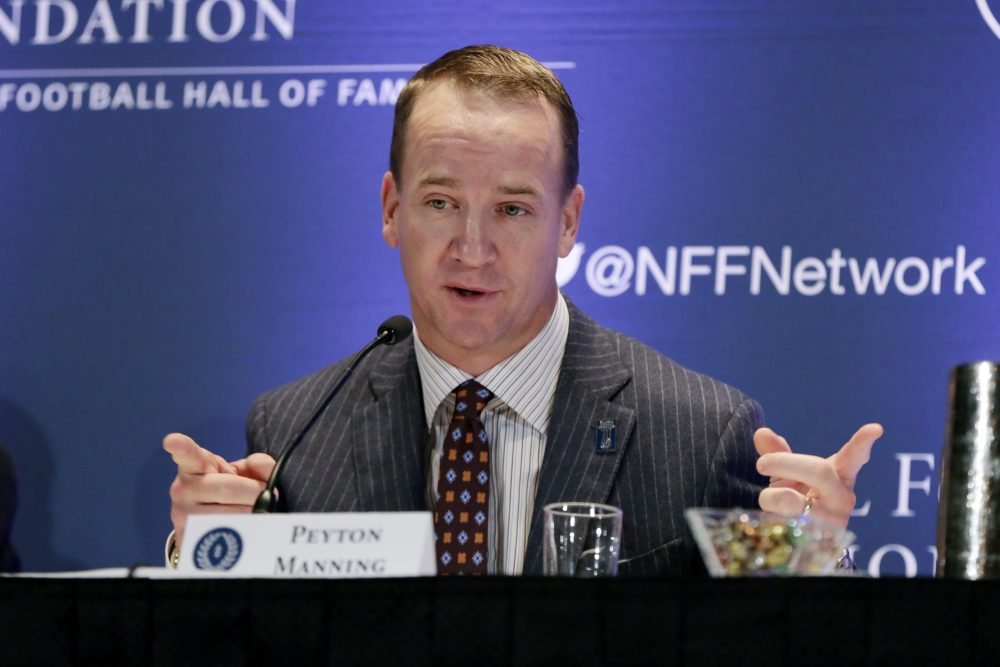 With change expected in the front office for much of the season, Manning’s name repeatedly surfaced in rumors and reports. Instead, Haslam fired head of football operations Sashi Brown on Thursday and hired general manager John Dorsey to replace him. Haslam said he has no plans to add a president or CEO.

As for Manning, he and Haslam had dinner Monday night in New York.

Manning retired after the 2015 season and told Sports Illustrated’s Peter King earlier this season he’d be interested in running a front office in the future but didn’t think he wanted to take on the huge responsibility yet.

“Peyton is a very talented individual,” Haslam said. “I do not think he knows exactly what he wants to do with his future. Whatever he does, he will be successful.

“We wish him the best, and we will be close friends. The Haslams and the Mannings have been close friends since Peyton came to Tennessee at 18 years old. That was 22 or 23 years ago. I think that will continue for a long time.”

Haslam added he had nothing to do with Tennessee’s recent coaching search. 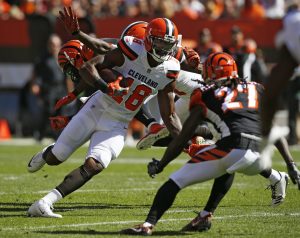 Browns receiver Kenny Britt (18) runs after a catch in a game earlier this year.
AP FILE

Britt was one of the worst free agent signings in franchise history. Brown signed Britt to a four-year, $32.5 million deal in March, including $10.5 million. He started four of nine games, catching 18 passes for 233 yards and two touchdowns. He missed two games with a groin injury.

Britt had several drops, including a critical one in the opener, and was never reliable, on or off the field. He was sent home from the Houston trip after missing curfew and didn’t play against the Vikings in London despite being healthy and active.

Haslam is the CEO of Pilot Flying J, the truck stop chain owned by the family.

“First of all, none of those individuals work for us anymore,” Haslam said. “Nobody that works for our company now was present at that event. That is not how we act and do things, and those kind of remarks are intolerable.”

He admitted the trial has been trying.

“It has been really tough,” Haslam said. “The entire investigation has been painful and tough to go through.”

The NFL said the Browns met the Rooney Rule, which requires an organization to interview a minority candidate for vacant general manager and coach jobs. John Wooten of the Fritz Pollard Alliance had criticized the team.

“We are satisfied the club met the Rooney Rule,” a league spokesman said in an email to The Chronicle-Telegram.

Undrafted rookie free safety Kai Nacua is in line to make his first NFL start Sunday against the Packers. Rookie Jabrill Peppers (knee) didn’t practice all week and was listed as doubtful on the injury report.

Justin Currie was promoted from the practice squad and will see time at safety, but Nacua is expected to start.

“I’ll just be thinking about my dad,” Nacua said. “He passed away right before my senior year in high school.”

Nacua pointed to a tattoo on his chest with the date of Lionel Nacua’s death, May 14, 2012. He was 45 and died quickly from complications of diabetes.

“I’ll just be thinking about him and everything he’s taught me throughout football and throughout life and wishing he could watch,” Nacua said.

** Tight end Seth DeValve (hip) was limited in practice and listed as questionable but is expected to play.

** Defensive back Briean Boddy-Calhoun (knee) didn’t practice Wednesday or Thursday and was listed as questionable but said he’ll play.

“It means quite a bit. To be honest, I didn’t think I was going to get nominated,” Telfer said. “Guys that have gotten nominated in the past — Gary Barnidge and Joe Thomas — they do a great deal for the community. It is an honor and a privilege to be recognized along those types of names, but the work continues.”

Coach Hue Jackson said it was the right choice.

Right tackle Shon Coleman was fined $30,387 for contact with an official last week against the Chargers, according to an ESPN report. After quarterback DeShone Kizer fumbled, Coleman ran toward the sideline and shoved an official to the ground as he pursued the play.

** Haslam said the botched trade attempt for Bengals backup quarterback AJ McCarron had “zero” to do with the decision to fire Brown. Haslam said he should be blamed for asking too many questions at the deadline, causing the paperwork to be turned in late.

Notes: DeShone Kizer still aiming for 65 percent completions despite ranking last in NFL at 52.5 percent
Notes: Josh Gordon scores 1st TD in almost 4 years but doesn’t have a catch after 1st half