DeShone Kizer thought he had a TD and win, instead it was yet another INT and loss 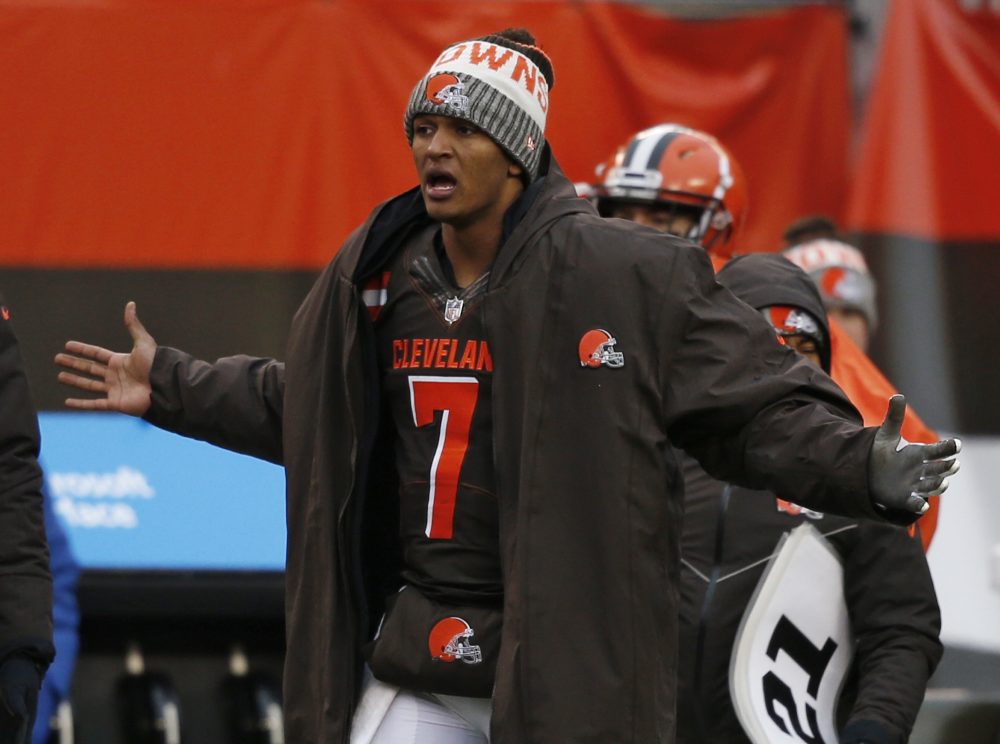 “You strike up the band there and enjoy our first win of this year,” Kizer said.

But before he could release the ball — and the first celebratory note could be played — Packers linebacker Clay Matthews closed and hit Kizer’s right forearm. The ball floated into the air, and safety Josh Jones came down with the ball in a swarm of players.

The Packers needed six plays to go the remaining 42 yards and pull out a 27-21 overtime win Sunday at FirstEnergy Stadium.


Kizer’s league-high 17th interception — his second of the game – ruined what had been his best performance of the season. He finished 20-for-28 for 214 yards, three touchdowns, two sacks and a 99.4 passer rating.

The third-and-2 play on the opening possession of overtime began with Kizer looking right for receiver Josh Gordon on a slant. Gordon couldn’t get separation — cornerback Demarious Randall appeared to hold him later in the route — and Kizer was forced to look elsewhere as he was pressured. He started right, turned back left and tried to heave a deep pass to Higgins, who had gotten behind safety Morgan Burnett.

“I was able to see Rashard Higgins spin off of his guy and have an opportunity to go down and make a game-winning touchdown,” Kizer said. “One of the better players in this league was able to reverse field with me, get his hand on my arm.”

All of Kizer’s senses were pointing toward the touchdown and a defining moment in his career. He didn’t feel Matthews closing in so fast.

“I could feel Crow (running back Isaiah Crowell) running down the sideline with one option,” he said. “It was a quicker and easier throw down the middle. You feel that if they make that play, you are going to come off and you are going to be rewarded for all the work that you put in.

“Even specifically in that play, you reverse the field and are making things happen, but obviously another unfortunate event happens to us and unfortunately we are sitting here with another ‘L.’”

“You can’t make that,” he said. “The play fell apart. You always have to be team-protecting unless it is obviously there, because let’s go see if we can play defense and give ourselves another chance.

“I think he was shocked that Matthews could get to him from where he was. He is moving to his left. If it does not feel right, it probably is not right.”

Jackson wants his rookie passer to have better awareness.

“Just understanding who you are playing against — that was Matthews coming off that edge,” he said. “He is a crafty guy. He is going to find a way to get a hand on you to make a play for their football team, and that is my point about players making plays in critical moments. He was able to make the play and we weren’t.”

Kizer was paid a visit as he sat at his locker following the game. General manager John Dorsey, who was hired Thursday after Sashi Brown was fired, talked to him for a few minutes, shared a long handshake and patted him on the back as he left.

Dorsey will determine if Kizer gets to stick around for a second season and who will be brought in as competition. It will likely be the combination of a proven veteran and the No. 1 pick in the draft.

He set career highs with 71.4 percent completions, three passing touchdowns and the 99.4 rating. He hit Gordon for 38 yards on a deep cross to open the Browns’ first series, then lofted an 18-yard post to him over linebacker Jake Ryan (Westlake/St. Ignatius) for a touchdown to tie the game at 7.

Kizer later capped a 12-play, 70-yard drive with a 7-yard shovel pass to running back Duke Johnson after extending the drive with third-down conversions to Gordon and Corey Coleman. He added a 2-yard dart to Coleman for a 21-7 lead in the third quarter.

Jackson called it “by far” Kizer’s best game — with a giant caveat.

“The two picks, it is still the same old if you turn the ball over, you are going to lose,” Jackson said. “I am happy to watch the progression of him, and he is doing the things I am asking him to do. Now, he has to do the other part and go find a way to help this team win. There is more there in DeShone. There is more in this football team.”

Kizer wouldn’t divulge the details of Dorsey’s message but provided the theme.

“To be reassured that the guys in the locker room with you have your back is always a good thing,” he said.

A win would be so much better.