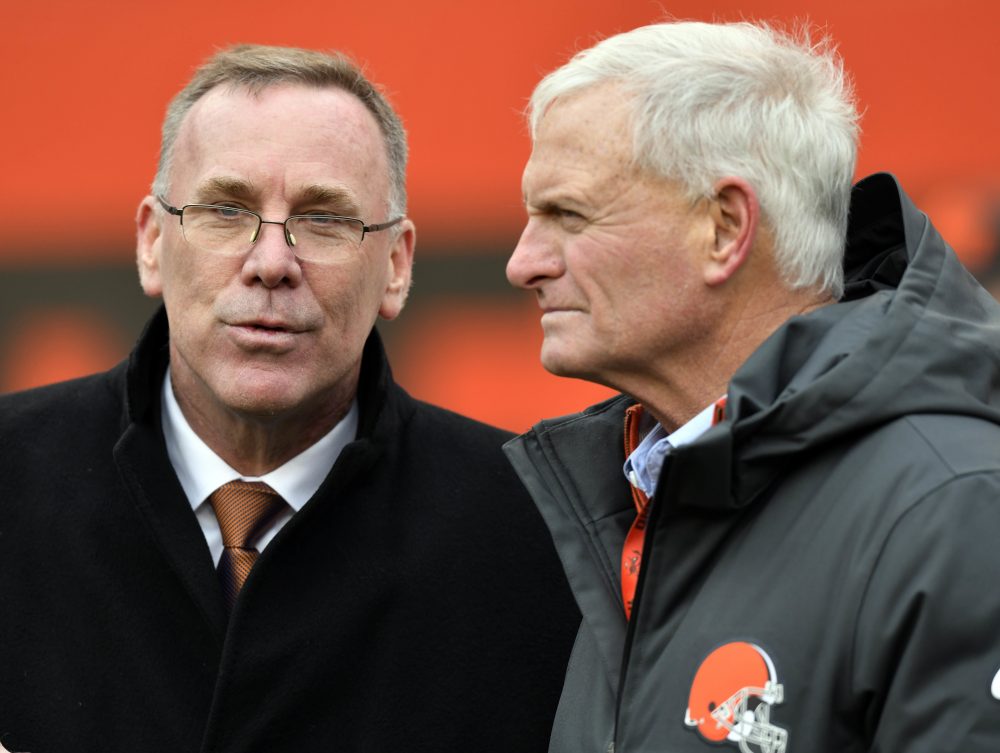 “He does such a marvelous of job trying to just take those guys and express to them the urgency and the concerns,” Dorsey said Wednesday on the team’s radio show on WKNR 850-AM after sitting in on Jackson’s team meeting. “He basically was saying, let’s make some plays, guys. It was very refreshing to see what he had to present to the team today.”

Dorsey watched the Packers game in person, then on tape with Jackson on Monday and wasn’t as complimentary of the roster. He echoed what Jackson’s said all season.

“We have to get some more players on this team,” Dorsey said. “I don’t say that maliciously. What I’m saying is these guys play hard, I mean, they play hard.

“It’s great. It’s just nice to be back in the environment where you can sit and go through football with real football guys. The interaction we have on a daily basis, it’s 1:52 (p.m.) and we’ve probably seen each other four times today. So there is a genuine interaction amongst each other.”

Dorsey was general manager of the Chiefs from 2013 until June and named a handful of Browns he had wanted to draft: running back Duke Johnson, left guard Joel Bitonio, defensive tackle Danny Shelton, outside linebacker Christian Kirksey and defensive end Myles Garrett.

Johnson was asked if the players consider the last four games an audition for Dorsey.

“You make it sound like a circus,” Johnson said. “A lot of guys have film that they know they can always count on and fall back on if they don’t have the best showcase in these next three games.”

The Browns braved the elements to practice in the cold and snow. The grounds crew earned praise from Jackson for clearing one of the fields and getting it ready, including heating it throughout the night.

“We had a good day today out in the snow. It was outstanding,” Jackson said. “We had a really good practice. The guys didn’t flinch. The elements at some point in time will be to our advantage if we do it right.”

“No. That did not happen,” Jackson said. “I can clarify that for sure.”

Dorsey cut Britt on Friday on his first day on the job. Britt cleared waivers and signed with the Patriots.

After Johnson scored on a 7-yard shovel pass Sunday, he kneeled in prayer in the end zone. When he got up, he made “50” with his hands to recognize Steelers linebacker Ryan Shazier, who recently suffered a serious back injury.

“That’s an injury where we never like to think about it, we never like to say that can happen to one of us,” Johnson said. “To see it happen to someone is just eye-opening for not just myself but a lot of players. And regardless of what team he played for or what team you root for, you never want to see something like that happen to anyone.”

Edwards is in his fifth season and has 21 tackles, two sacks and two passes defensed in 22 games, including a start. Hazel has appeared in nine games.

** Free safety Jabrill Peppers (knee) and Shelton (chest/ribs) returned to practice in limited capacity. They didn’t play vs. the Packers.