Myles Garrett not satisfied with his 1st 8 games, won’t be happy until he’s piling up the sacks and turnovers 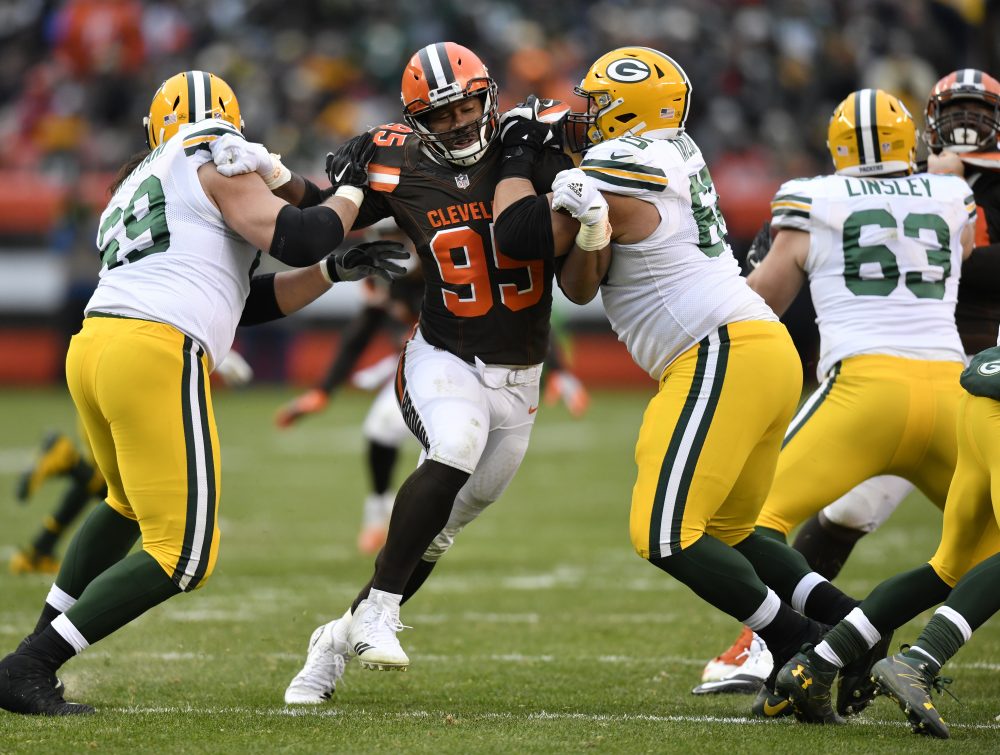 BEREA — Myles Garrett has drawn double teams. He’s caused the quarterback to hurry. He’s landed a few hits after the ball was released.

He’s not happy without takedowns and turnovers.

“I know it’s nice to be disruptive and that’s the goal, but you still want to have (the quarterback) fearing you because if he doesn’t get the ball off or put it in the right spot I’m going to be right there,” Garrett, the rookie defensive end, said Friday. “So just having that factor of ‘I took him down’ or ‘I took the ball from him’ he has that constantly in his mind. That’s the best part of being a defensive player.”

Garrett (6-foot-4, 272 pounds) hasn’t been good enough in the two crucial categories to open his career. Through eight games, he has five sacks, 24 tackles and a fumble recovery. He’s still looking for his first strip-sack — 15-year Ravens veteran Terrell Suggs has 30 in his career — and has only one sack in the last five games.

Offenses are sliding the protection to limit Garrett’s effectiveness and quarterbacks are getting rid of the ball in a hurry, but more game-changing plays are expected of a No. 1 pick who has all the physical skills required and desired.

“Could have been better. Could have made some bigger splash plays,” he said of his first eight games. “There is always things you look back on and realize that if you would have done this or done that, you could have had a bigger impact. You just have to learn from it and do it differently in the games to come.”

He’s got three left to change the story of his first season.

“Just being unstoppable at my position, that’s the goal,” he said.

Coach Hue Jackson has demanded more from Garrett since he returned for a high right ankle sprain that cost him the first four games. He sees the immense talent and wants more impact.

“He has handled it. He doesn’t blink that way,” Jackson said. “He has given more. There is more effort, more tenacity. He is doing it.

“Obviously the numbers are not what we all want and what we all look for, but he has done what we have asked him to do. There is no question about that.”

Coordinator Gregg Williams has made a career pushing the buttons of his players but said Garrett takes care of that himself.

“You guys do not have a clue about internal pride and you do not have a clue about all the things behind the scenes that nobody has to ask him to do and that he does himself,” Williams said. “He does because he pushes himself. He expects more of himself. Those are the kind of guys you want to have around instead of the ones that push the eject button as fast as they can and instead of the ones that want to get to a video game as fast as they can.”

Garrett said don’t be fooled; Williams still gets in his face.

You know how he is. He is going after everybody,” said Garrett, who went for the strip and missed the tackle on Green Bay’s winning touchdown Sunday. “He wants the best out of all of us.

“He wants to motivate me even further to push to the heights that he knows I can reach.”

Williams said the quarterback gets rid of the ball faster against the Browns than any other defense. He points to the league-high volume of blitzes he calls that are “protecting different people, protecting different skill sets” in the rest of the defense.

The quick throws available to the quarterback reduce Garrett’s sack chances. Jackson said Garrett can still affect the game by batting balls but is looking for him to finish the near-miss sacks.

“You go through that rut a little bit sometimes where you know you are almost there,” Jackson said. “It is just one more step, a fraction of a second. I’m sure he feels that, but one thing I know about Myles, he is going to keep coming.”

Garrett analyzes the film to see where he can shave the precious tenths of a second. Did he maximize his steps? Did he hesitate? Was he violent enough with his hands? Should he have tried to knock the ball loose?

“Just combining all that and using it for the next time I’m in that situation,” he said.

“Eventually it is going to break through where he gets one of these multiple-sack games because he is due,” Jackson said. “He just has to stay after it and keep playing, and that is what type of person he is.”