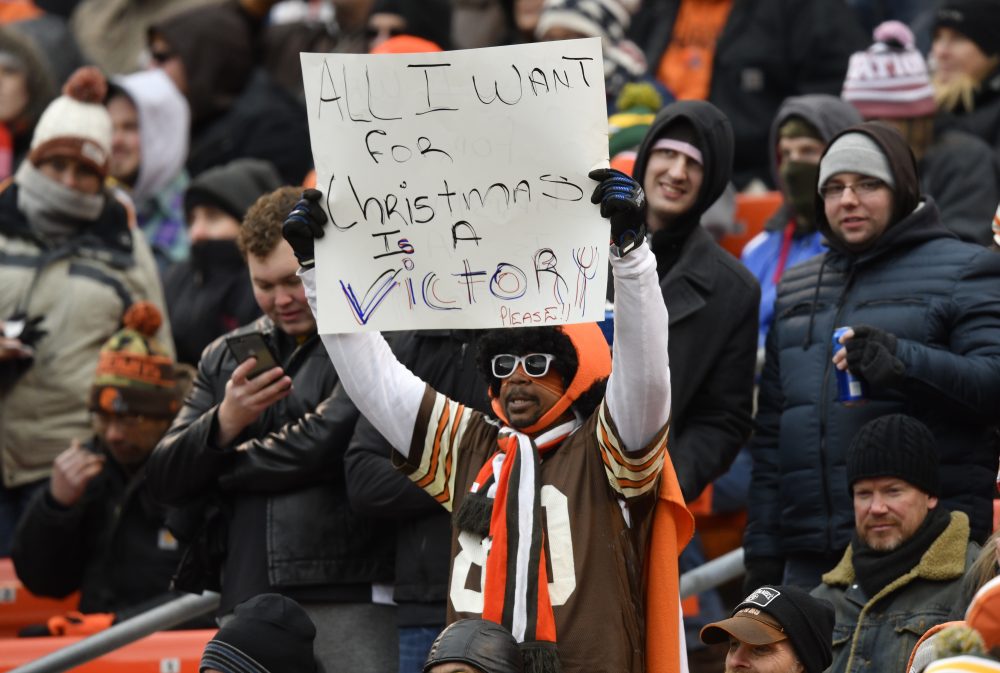 The Browns were founded in 1946 and have gone winless at home only once, when they returned in 1999 as an expansion team after the city went three years without football.

The Browns (0-13) have regressed over the last two seasons and are in danger of matching the 0-8 home record — seven losses on the lakefront and one in London. The last chance to avoid the awful distinction is with an upset of the Baltimore Ravens (7-6) on Sunday.

“We really feel for our fans and we want to do what is right for this city,” run game coordinator Kirby Wilson said. “It has been a trying season in terms of the lack of the W’s and all of the L’s piling up. We really want to win this ballgame for this city and this fan base because they deserve it. They have been so loyal to us, and we would like to give them something to cheer about this Christmas.”

The Browns would wipe out two giant goose eggs with a single win over the Ravens, as the specter of 0-16 looms large with three games left, the last two on the road against Chicago (4-9) and Pittsburgh (11-2). The 2008 Detroit Lions are the only team in NFL history to go 0-16.

“Nobody wants to go 0-for-16,” running back Isaiah Crowell said. “Last week was one of our best games of the season, I feel like we played good, but in the fourth quarter we didn’t finish. I feel like we’ve got to just put together a whole, full, solid game.”

The Browns were one play from knocking the Green Bay Packers out of playoff contention. They never made it and fell 27-21 in overtime at FirstEnergy Stadium.

The Browns could deal a huge blow to the Ravens’ playoff chances by stopping their rivals, but they’re more concerned with pleasing fans than playing spoiler.

“It’s unfortunate we haven’t given them enough wins this year,” left guard Joel Bitonio said. “We talked about it in practice when we were breaking it down, ‘Let’s get a win for the fans.’

“We want to win ourselves, but give them something to remember so next year when we’re coming to training camp, they have a little taste of victory coming back with us.”

The Browns are the only team in NFL history to begin consecutive seasons 0-13, have dropped 14 straight overall and 15 in a row inside the AFC North. The unprecedented stretch of losing has hurt attendance at FirstEnergy Stadium, but Bitonio is grateful for all the fans who’ve persevered.

“They’re fighting for that first win as well. If I was in their position, it would be tough, too,” he said. “They love their Brownies, and we appreciate that, especially when we’re not playing well. It’s just the passion of the fans and the history of the team. You have grandpas and great-grandpas who watched Jim Brown and those teams and then dads and moms who watched Bernie Kosar and those teams and now the fans are looking for that. Hopefully we can deliver that someday.

“The true fans who come to the games no matter what, when we do become successful, it’s going to really pay off for them.”

The Browns avoided a winless season last year with a Christmas Eve miracle in the home finale against the Chargers. The rookies have never seen the home crowd after a victory, but they’ve experienced the passion in other ways. Quarterback DeSone Kizer said he hears the good and bad from fans when he’s around town.

“They really want to win. They deserve to win,” he said. “A blue-collar, hardworking city who are obviously very passionate about their Browns, they have been going through some tough times when it comes to our records and our ability to win and win on our home field.

“From that, I have been able to hear some of those opinionated comments and I just take them as motivation because those same people are going to be the ones supporting us when we do start to win. When we are winning, we have this whole thing turned around and we get over this hill that we continue to talk about, I am sure these are going to be the better things that this league has ever seen.”

Defensive end Myles Garrett, the No. 1 pick, said most of his interaction with fans has been positive.

“They expect us to win,” he said. “They expect us to get after it. But even when they don’t, they’re still there for us and they still appreciate what we do and how hard we work and they’re hungry to win just like we are.

“It’s the last time to defend home field and nobody wants to leave there with a loss. Nobody wants to have that be their last memory of walking off the field. So you have to give it all you’ve got for this opportunity.”

The Browns promoted cornerback C.J. Smith (5-foot-11, 188 pounds) from the practice squad and waived cornerback Darius Hillary, who was battling a knee injury.