Browns want to “ruin” plans for 0-16 parade and avoid history, but are down to 2 chances 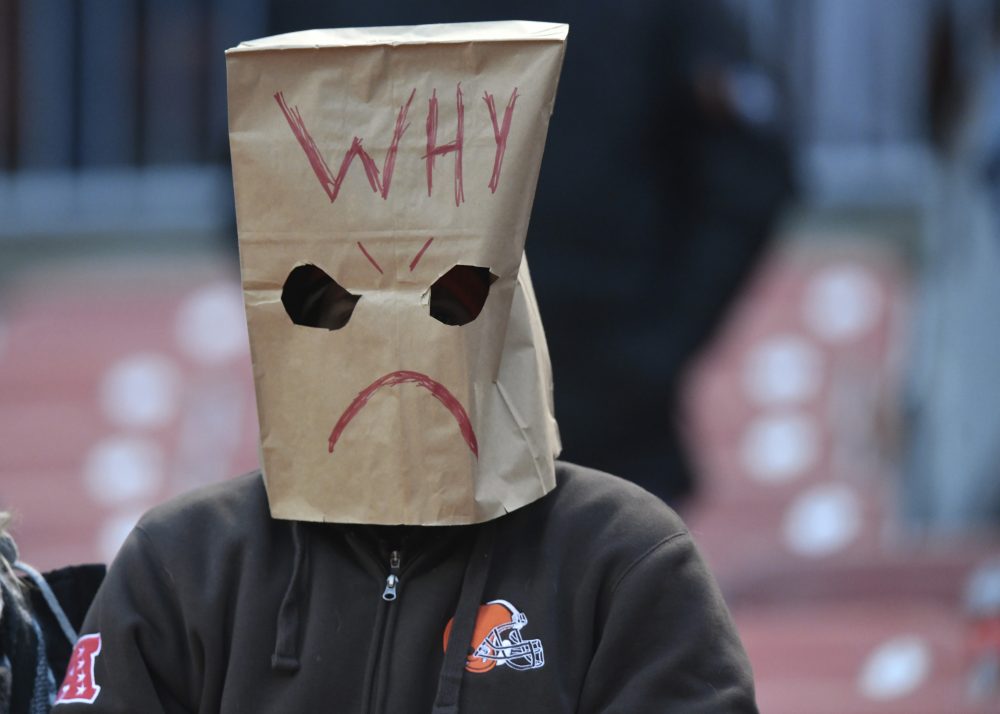 Fourth of July? Of course.

But Browns coach Hue Jackson and his players have no interest in seeing a parade to commemorate an 0-16 season, which is only two losses away.


Fan Chris McNeil started the idea of the “Perfect Season” parade last year, but the Browns won on Christmas Eve in their 15th game and it was canceled. It’s rescheduled for Jan. 6 if a win doesn’t come and would be sponsored by Excedrin.

“I’m trying to make sure that there’s not a parade going on here pretty soon,” Jackson said Monday on a conference call when asked about the uncertain status of Bengals coach Marvin Lewis. “So that’s what my focus has been.”

The Browns can put a stop to the floats with a win Sunday in Chicago or Dec. 31 in Pittsburgh.

“They’re entitled to do what they want,” Jackson said of the parade organizers. “They have true passion about the Browns and we really appreciate that.

“Everyone in our organization is working extremely hard to make sure that there’s not a parade. Would it be disappointing if they had one? Yes. But at the same time, I do get it. We just haven’t been good enough to get all that kind of talk stopped.”

The Browns are 1-29 in the last two seasons under Jackson, bringing ridicule and embarrassment regardless of any postseason procession around FirstEnergy Stadium.

Middle linebacker Joe Schobert said he doesn’t feel the parade would be disrespectful but plans to ignore it if it happens.

“I’m going to be happy if we win and they don’t do it, but I’m not going to pay attention to it if they have it,” he said.

Jackson apologized to the fans Sunday after the Browns completed a winless home schedule, losing seven times on the lakefront and once in London. He said Monday he, owner Jimmy Haslam and new general manager John Dorsey are devoted to turning around the organization.

“We know our fans deserve better, there’s no question about that,” Jackson said. “The work our players continue to put in is going to lead us to success that we all want.”

The parade would get plenty of attention locally and nationally, but the real damage would’ve already been done. The Browns would join the 2008 Detroit Lions as the only 0-16 teams in NFL history.

The threat has been looming since about Week 4 of 2016. It subsided with the Christmas Eve win over the Chargers but resumed when this season started.

“We don’t want to go in the record books that way by any stretch,” Jackson said. “Nobody does. We didn’t set out for this to happen this way.

“So we’ve got to do everything we can on our part over the next two weeks and our whole organization is trying to do everything possible to make sure we come away with some victories here. We’ve had some chances and haven’t been able to secure them.”

At 0-9 last year, linebacker Christian Kirksey guaranteed the Browns wouldn’t go winless. No one’s made the same proclamation this season, and avoiding 0-16 hasn’t been as prominent in discussions with the players.

“I haven’t really thought about that at all. I just go one game at a time,” Schobert said. “I know people haven’t said it out loud or to the media or anything, but nobody in our locker room wants to go 0-16. But you can’t have that pressure looming over you and expect to be at your best. I think guys have done a good job of not thinking about it, just focusing on the next opponent ahead of them and just trying to go 1-0 in that week.”

Tretter said the Browns would be misguided to dwell on trying to avoid history.

“I don’t think that should weigh on anybody’s mind at this point,” he said. “We have two more opportunities to go out there and play the game and prove what we can do. Thinking about things like that will only waste your energy and waste time in what you should be putting forth on preparing and getting ready for playing the Bears.”

Jackson said Sunday he hasn’t coped well with all the losing and “would never” be able to do it for a third year.

“None of us at this level can tolerate losing,” Tretter said. “The amount of effort and work that goes into our play and our preparation each and every week, it is truly a pain to go out there and not see the results. To a man, no one is having any bit of fun with being 0-14 at this point. That is not just a Coach Jackson thing.

“You go home and you can’t sleep. You sit up and you think of what you as an individual could have done differently to change something in the game. It is a lot of sleepless nights. It is the players. It is everybody. Everybody thinks of what they could do, and putting 14 of those sleepless Sunday nights in a row obviously is a long year.”

Two more losses and a parade would make it even more intolerable.