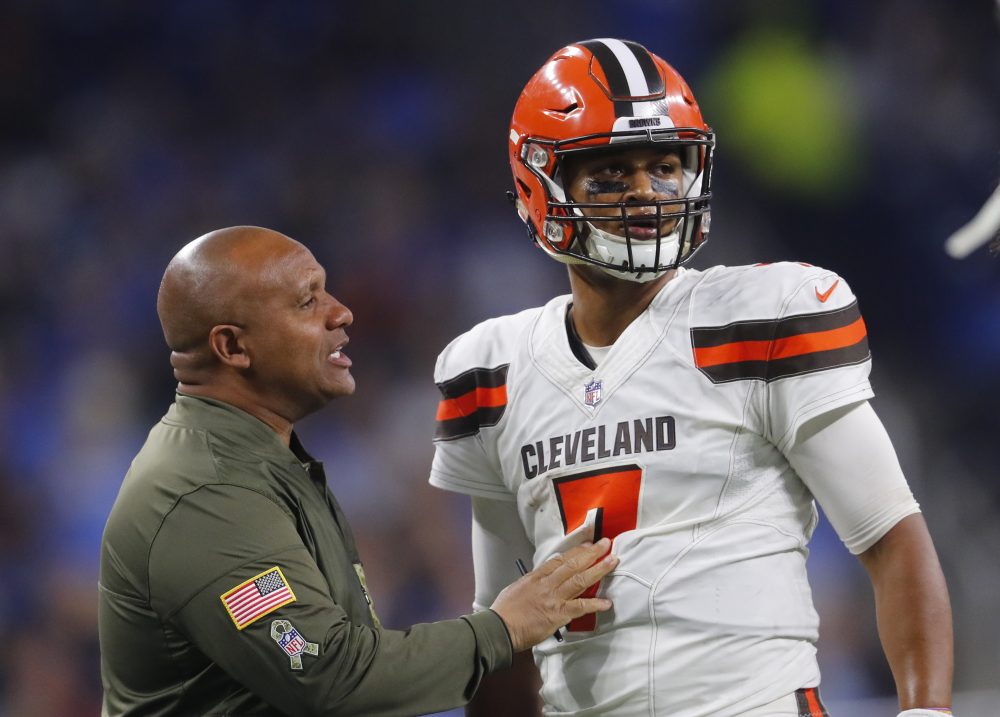 BEREA — DeShone Kizer believed he was the best quarterback in the draft in April. He thought he’d be a first-round pick, if not the first quarterback taken.

So the trajectory of his career drastically changed. Perception matters in the NFL, especially when it comes to quarterbacks.

“We did not draft a quarterback in the first round and say, ‘This is our quarterback of the future,’” Jackson said. “We took a quarterback. We’re trying to grow him. We have a very young quarterback room. We need to continue to improve that room as much as we can as we move forward for it to be the best it can be.

“I understand when you take a guy in the second round, everybody suspects that that’s the guy. We wish it is. You hope it is. But if it isn’t, that’s OK, too. And hopefully that guy will continue to grow and get better, but you also have to continue to get better at the position.”

Jackson had said all year he believed Kizer could be the future of the franchise but changed his message Wednesday, less than two weeks after John Dorsey was hired as general manager. The Browns are expected to add a veteran quarterback in the offseason and likely draft another with the No. 1 pick.

Chicago traded up a spot to No. 2 to take Mentor’s own Mitchell Trubisky, a strong-armed, athletic, intelligent quarterback out of North Carolina with only one season as a starter. He’s 3-7 as a starter with the Bears, completing 59.8 percent for 1,822 yards, seven touchdowns, seven interceptions and a 77.8 rating.

Fox was asked about his confidence that Trubisky is the future for the Bears.

“Yeah, very confident,” he said on a conference call. “He has done a tremendous job since we inserted him as the starter. He has improved every week.

“Like any young player, they are going to make mistakes. What has been impressive about Mitch is he does not make the same ones.”

Kizer is strong-armed, athletic, intelligent and was a two-year starter at Notre Dame. He is 0-13 with the Browns with a league-low 53.9 completion percentage, 2,398 yards, nine touchdowns, a league-high 19 interceptions and a league-worst 59.4 rating.

The physical attributes and statistics are similar enough to believe Trubisky and Kizer could have parallel careers, but they seem to be on completely different tracks. Kizer’s inconsistency at Notre Dame scared NFL scouts and dropped him to the fourth passer drafted.

The Browns, who took defensive end Myles Garrett with the top overall pick, let the Chiefs jump ahead of them to take Texas Tech gunslinger Patrick Mahomes at No. 10, then traded the No. 12 pick to Houston so the Texans could draft national champion Deshaun Watson.

Former head of football operations Sashi Brown didn’t place a priority on quarterback, proving that bypassing Carson Wentz at No. 2 in 2016 wasn’t an outlier. He took safety Jabrill Peppers at No. 25 and tight end David Njoku at 29 before settling for Kizer at No. 52.

“At the time, it was frustrating,” said Kizer, a Toledo native. “I thought I would be a first-round guy, but here and now, this is the best experience I could possibly have. I was able to go to my hometown team in a way and attempt to revive them out of a situation that we all know they didn’t want to be in.

“Now, I’m here and part of that situation and experiencing some of the lulls that this city has experienced for a little bit of time now. It is about accepting the position I’m in now and doing whatever I can to get out of it.”

The constant talk that the Browns will replace Kizer as the starter next season is just the latest challenge he’s faced. He was named the Week 1 starter by default, continues to struggle with turnovers, was benched three times, suffered bruised ribs, threw to a revolving door of bad receivers for much of the year and Jackson tried to trade for his replacement in Bengals backup AJ McCarron at the deadline.

“In one year, I have been able to take what most guys get in four and five,” Kizer said. “That means hopefully once I get over this and learn from this situation, I will be able to be a better quarterback for longer than anyone who has gotten to that level has been.”

Running back Duke Johnson said Kizer’s “confidence is probably shot” after the ordeal and it’s up to teammates, family and friends to lift his spirits. Kizer has said the right things all year and insists his confidence will always remain high.

“This is an unbelievable experience that I have been able to go through,” he said. “Obviously not winning games is not the goal, but I have the best job in the world. I am going to continue to lean on my support staff and lean on my faith to continue to guide me in the right direction to become a better quarterback so that I can continue to stay in the position that I’m in right now.”

Jackson considered benching Kizer, who was dejected after the 27-10 loss to the Ravens on Sunday, but decided he was up to the challenge of finishing what he started.

“DeShone is still a very confident person and still a confident player,” Jackson said. “That being said, are there some scars there? You better know there are.

“But there’s been many other players before him that’s been in some similar situations that’s had the same scars, maybe not to this extent, but they’ve had them and they find a way to come back out of them and have great careers. We know that and that’s what we’re anticipating from him.”

He’ll need the opportunity, and it’s far from guaranteed for a second-round pick.