Josh Gordon hasn’t lived up to his expectations, insists he wants to stick around and be part of the turnaround 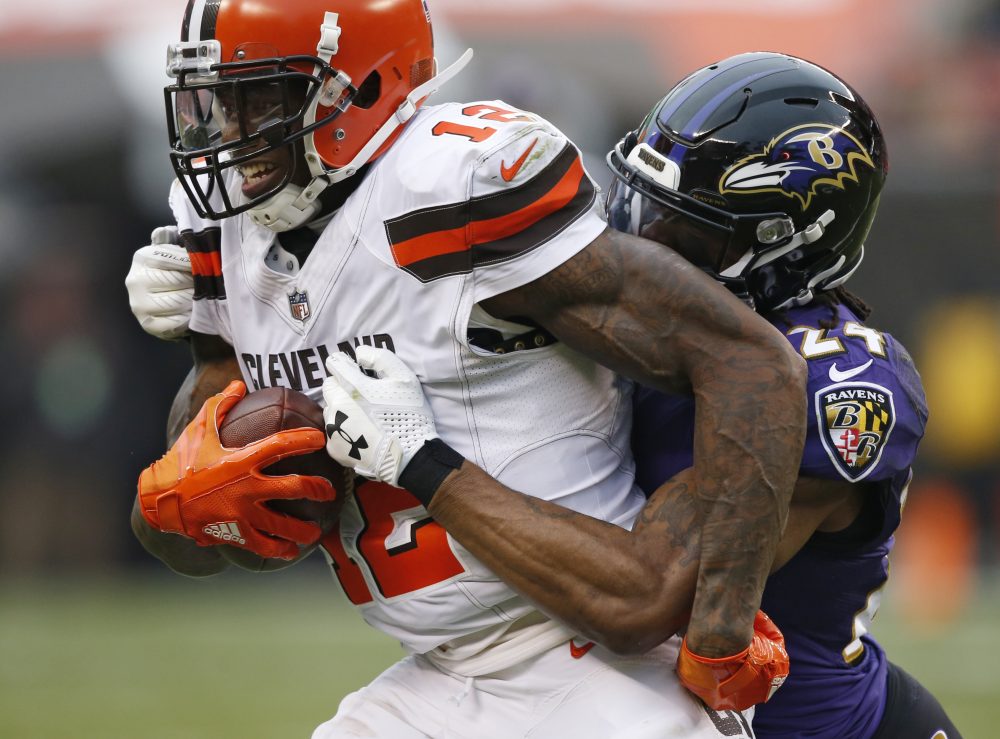 BEREA — The Christmas gift coach Hue Jackson was so excited to unwrap has been more socks from Grandma than Xbox One from Santa.

Receiver Josh Gordon’s return from a nearly three-year drug suspension has been utilitarian, not thrilling. In three games he has 12 catches for 201 yards, a 16.8 average and a touchdown.

He’s been serviceable while changing the way defenses approach the Browns but hasn’t had a 100-yard game nor lifted the team to a win. In his All-Pro season of 2013, he eclipsed 100 yards seven times in 14 games, including consecutive 200-yarders.

“The big game will come,” said Jackson, who last month called Gordon’s return “like Christmas” and opening a “new toy. “I know we are all looking for it and waiting for it. It is going to come.”

Gordon wants more from himself. He considers himself a difference-maker but has yet to change the outcome for the winless Browns.

“I do not believe I hit my expectations,” he said Thursday. “The standard I set myself to is extremely high. That’s to be great, and the amount of work that needs to be put into that takes a lot of sacrifice and a lot of time.

“I’m hoping for a win more than anything. That’s my first, main and the only priority right now is a W. I could care less about individual things at this point. Honestly one favors the other: If one happens, then the other one happens.”

That’s the prominent issue at 0-14. The Browns are desperate for a win Sunday against the Chicago Bears (4-10), and both teams realize Gordon is a giant key.

“I’m always looking for a chance to try to change the game,” he said. “To be a game-breaker, I feel like that’s my role, that’s what I’m here for and I take that on. I take that mission and I take that with pride and a sense of urgency.

“So it is frustrating when you don’t get that done. But it’s just more work that you know that there needs to be done in order to get that.”

Gordon was disinterested and disruptive in his return from suspension in 2014 and complained about harassment from Cleveland fans in an interview with GQ Magazine before he rejoined the team last month. He insisted Thursday he isn’t looking to follow cornerback Joe Haden and receiver Kenny Britt out of town after they were released this season.

“I know Joe was heartbroken having to leave here,” Gordon said. “Joe’s one of those guys that bought in 100 percent here, and a lot of us take on this job of being here as a challenge and something that we don’t shy away from.

“It’s not like seen as something that’s holding us back. It’s something as a competitor you want to do. You want to come to Cleveland to change the dynamic, to be one of the people responsible for bringing a winning season, a winning organization to the city.”

He said he still feels that way.

“Most definitely. Just the fact that we’re where we’re at doesn’t make up our identity as a team, doesn’t make up or define my character or who I am, being a loser,” he said. “That means we have to work hard, and when we do get over that hill, it’s going to be great.”

Gordon isn’t scheduled to be a restricted free agent until after the 2018 season and was asked if he intends to ask for a trade in the offseason.

Jackson praised Gordon’s hustle and competitiveness and said he doesn’t sense any frustration from a muted impact and lack of big plays. He added it’s “unreasonable” to expect 100 yards and a touchdown every game.

“People are trying to make sure Josh Gordon does not catch a ball,” Jackson said. “Sometimes there is a guy in front of him, a guy over the top and a linebacker running at him. People are not just going to let Josh walk back out there and catch 15 balls for 200-something yards. People know if he does that we have a chance to win. People are going to do everything they can to slow that down.

“Do I think Josh is working hard? Do I think he can get back to where he was? Yeah, I see a really dominant football player who is growing each and every week, who has been consistent in our program and who is working hard.”

Jackson estimated defenses double-team or give extra attention to Gordon on more than 60 percent of the snaps. Gordon said he often sees a safety over the top but hasn’t felt the pressure of constant double teams. He believes there are big plays available but he and quarterback DeShone Kizer haven’t made them.

“I need to lead by example and make sure I can make those big plays. When your number’s called, it’s your time to go. I feel as though unfortunately we’ve missed a lot of my opportunities for stretching the field, so I have to keep coming back week after week making sure that when that time comes and that big play in the game — it’s possible the game-winner in the second half — that I complete that pass and I can change the game. So I’m preparing every game for that moment.”

While Gordon is still trying to meet his lofty expectations, he believes he passed those of many outsiders when he returned to the league after missing 44 straight games.

“I don’t think many people expected me to come back and play, period. Let alone perform,” he said. “Most people counted me out. I’m just glad to have an opportunity to be out there and make the most of it.”

Mitchell Trubisky is starting to let it fly, says he’ll stay grounded facing hometown Browns who let him get away
Do you believe in Christmas Eve miracles? Browns are hoping for another this year