Mitchell Trubisky is starting to let it fly, says he’ll stay grounded facing hometown Browns who let him get away 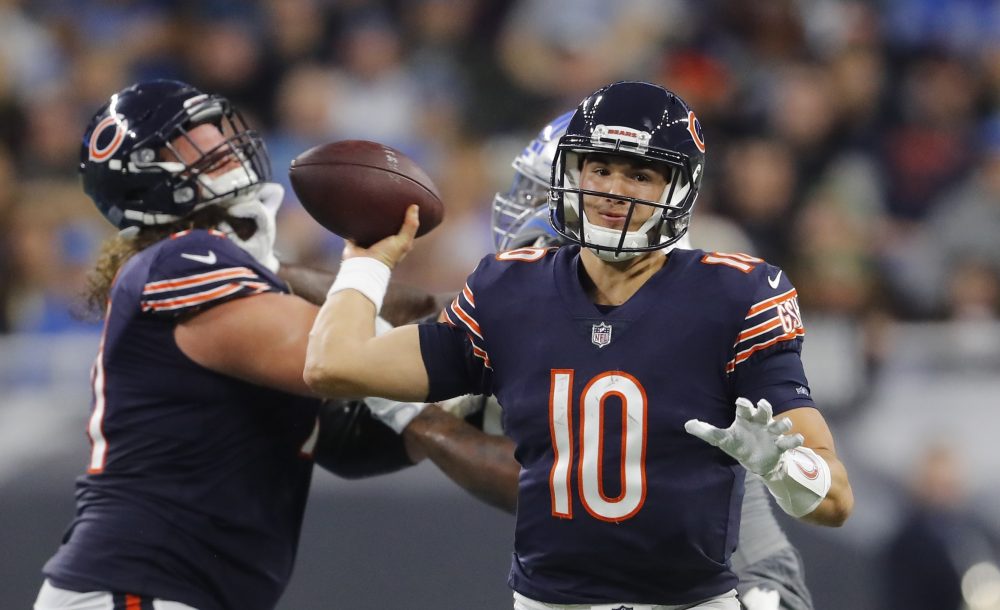 The training wheels are off as Trubisky and the Chicago Bears prepare to host the Browns on Sunday.

“I think they are just figuring out what all I can do in this offense, how much they trust me and how far along I have progressed since the beginning of the season,” Trubisky, a Mentor native, said Wednesday on a conference call. “We are just trying to really get back to a balanced offense, and they trust me now to make decisions with the ball and air it out.”

The Bears showed their belief in Trubisky by trading up a spot in the draft to No. 2 to ensure they’d get him to be their franchise quarterback. He’s earned their faith with a steady progression throughout his rookie season.

The North Carolina alum began the year on the bench behind veteran Mike Glennon, then took over as the starter in Week 5. After a close Monday night loss to the Vikings in his debut, Trubisky won two straight, becoming the first rookie in 20 years to win in Baltimore then knocking off Cam Newton and the Panthers.

The victories felt like they came with asterisks. He was 8-for-16 for 113 yards and a touchdown against the Ravens, then 4-for-7 for 107 vs. Carolina as the Bears stayed committed to the run.

“It was just a game where we felt the matchups were pretty favorable,” coach John Fox said of the win over the Ravens. “Even in that game, there was a critical third-and-8. He stepped right up into the barrel and drilled a completion that actually set us up for the game-winning field goal in overtime.

“It was not like we did not have the confidence in him, but we just wanted to do what was best for us, the team and him, all combined.”

“You have to let someone grow,” he said. “You do not want to put too much on someone’s plate that they cannot handle.”

Trubisky’s trajectory likely would’ve been much different if the fight inside the hometown organization ended differently. The Browns coaching staff argued for Texas A&M defensive end Myles Garrett at No. 1 and got him, despite the objection of some in the building who wanted Trubisky.

Notre Dame quarterback DeShone Kizer was chosen at No. 52 and forced into the lineup for Week 1. Coach Hue Jackson pushed him into the deep end, with at least 30 passes in the first four games. Kizer has thrown at least 28 times in every game he’s finished.

“They protect him a lot,” he said of the Bears and Trubisky. “They have a really strong running game. He has made some plays. He has been able to win some games.

“I’m sure that confidence level for him is strong.”

Jackson said the reason for the difference in styles is that the Bears opened the year with a veteran in Glennon and only went to Trubisky when that wasn’t working.

“Our situation was totally different. When you start a season, you are still trying to win football games, not that they weren’t,” said Jackson, who has two second-year quarterbacks and a rookie, none of whom with a win in the NFL. “Our quarterback room was much different. Would we have liked to run the ball more? Yeah.

“We have tried to do those things, too, but at the end of it, you are still charged with winning football games. It is not just making sure that he can make it to the next game.

“We have a locker room that is trying to win each and every week, and that is what we are trying to do.”

They’ve obviously failed as they head into Chicago 0-14. The Bears (4-10) are 3-7 under Trubisky with six losses in their last seven games.

But he’s gotten better throughout the year, particularly in the last three weeks. He raised his completion percentage seven points to 59.8 after completing 80 percent, 78.1 percent and 67.4 percent against the 49ers, Bengals and Lions.

He threw three interceptions Saturday in a 20-10 loss to the Lions but impressed Fox. Trubisky set career highs with 31 completions, 46 attempts, 314 yards and three interceptions. His one touchdown pass tied his best for the year.

“For that game, I did get better in some areas, but I also did make some mistakes that can’t happen again for sure,” Trubisky said. “I enjoy throwing the ball that much and having the ball in my hands.”

“He has improved every week,” Fox said. “Like any young player, they are going to make mistakes. Where he has been tremendous is not making the same mistakes.

“He has been tremendous in all phases — off the field, on the field. He has the respect of his teammates. Even as a rookie, with each game you can see that confidence grow.”

For the season, Trubisky’s thrown for 1,822 yards with seven touchdowns, seven interceptions and a 77.8 rating. He said he’ll have a “good amount” of family in Chicago for the Christmas Eve game but won’t be emotional or feel extra pressure facing the team he grew up cheering.

“I don’t think it will be emotional at all,” he said. “I’m an even-keeled player so I’m not going to get too high, not too low. No added pressure.”

He said he knew the Browns were looking for a quarterback in the draft but had no expectation they would take him No. 1. Garrett was the consensus best player but has been slowed by ankle injuries and has five sacks in nine games, just one in the last six.

“I thought anything could happen and if I was meant to be in Cleveland that they would trade up and come get me, but I don’t think they could get back into the No. 2 spot,” Trubisky said. “Chicago was really interested so they made that move to come get me, and I was very excited about that.

“I just prayed that I would end up in the right spot, and I thank God I did. I just love being here in Chicago and the opportunity I have in front of me now.”

Hue Jackson backs off belief DeShone Kizer is QB of future, while Chicago’s John Fox goes all-in with Mitchell Trubisky
Josh Gordon hasn’t lived up to his expectations, insists he wants to stick around and be part of the turnaround