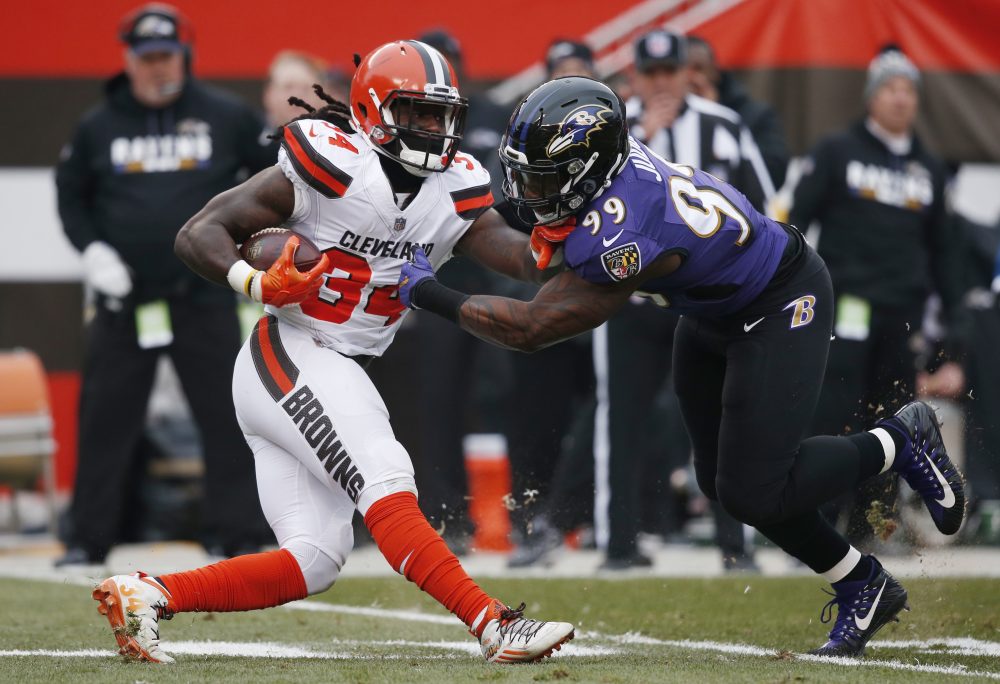 BEREA — Running back Isaiah Crowell said this week he felt “disrespected” by getting only five carries Sunday in a loss to the Ravens. He couldn’t have felt appreciated listening to coach Hue Jackson dismiss his role in the bright spot of the game, a 59-yard run that led to Cleveland’s lone touchdown.

“All five of us could have run through that hole,” Jackson told reporters Friday. “Inspiring runs are when you break tackles. It is the tough runs. It is when everybody is knocking the crap out of you and you find a way to still make 4 or 5 yards.

“What I’m looking for is more of the grunt, tough type of runs that I know that you have to have in the National Football League from our runners, period. They gave us some. We have to continue to do more.”

Crowell was handed the ball twice after the 59-yarder — one was negated by a penalty — and finished with 72 yards. He admitted he was “upset” by the lack of chances, and Jackson said they had a good discussion and he understands the frustration.


“He feels like he can help do more and help the team,” Jackson said. “I totally understand. Just how we handle those things is important, just as important to me as anything, and he understands.”

Crowell “liked” a series of tweets referring to Jackson’s comments, including @Hisler420’s “If crowell wasn’t feeling disrespected before, he should now.”

Jackson conceded he needs to do a better job of making sure Crowell’s involved, but got defensive when pressed about Crowell’s lack of carries last week and calling only seven rushes over the final 2½ quarters. He said he called the same play that resulted in the 59-yard gain — Austin Reiter as an extra lineman and fullback Danny Vitale leading the way — in the third quarter and Duke Johnson lost 4 yards.

“We did run that play. I knew you guys didn’t know that. I know the people who ask these questions didn’t,” he said. “Yeah, we did. Go look and see what happened the second time we ran the play. Then maybe you will understand a little better. Same play, different area of the field, behind the same people.

“That is football. That is the way it works. Every hole is not going to be a 59-yard run. Sometimes you have to make your holes as a back, and I think the backs understand that.”

Jackson has received tons of criticism during his 1-29 tenure, with plenty of it directed at his failure to commit to the run as he said he would.

“It hasn’t worked out that way,” he said. “I thought that we would be able to be in games a little closer than what we have been. We get behind, and I hate to say it — I’m just being very honest — sometimes I have gotten away from it a little too quickly. But there are times where in order to score points, the fastest way to get there is throwing the football.

“I understand the criticism. We have run the ball better over the last five or six weeks. We will continue to do so.”

Rookie Jabrill Peppers has been “itching” to make a play this season and hopes moving closer to the line of scrimmage will help. With strong safety Derrick Kindred out with a wrist injury, Peppers will see time at strong safety, as well as his normal free safety, Sunday against the Bears.

“It’s definitely more ways to make plays being closer to the ball,” said Peppers, who has no interceptions, sacks, forced fumbles or fumble recoveries.

Peppers played linebacker and nickelback at Michigan but has spent most of this year 25 yards off the line at free safety. Coordinator Gregg Williams said Peppers’ versatility will allow him to try to confuse Bears rookie quarterback Mitchell Trubisky by disguising coverages.

“It is going to be fun to see,” Williams said.

No. 1 pick Myles Garrett wanted to be rookie of the year and a Pro Bowler. Instead, he has five sacks in nine games and only one in the last six. The lack of success is eating at him.

“It doesn’t feel good,” the defensive end said. “Personally I know I can do better and I’ve been working to do better. I just have to make sure that when I get the chance and he’s holding the ball that I finish to him and I take the ball away. Practice what I preach.”

EMPLOYEE OF THE MONTH

“Employee No. 96, he is unbelievable,” Wilson said. “Nobody blocks him. He takes on double teams, triple teams. He splits blocks. He sheds blocks. He is sacking the quarterback. He is tackling the runners.

Cornerbacks Jamar Taylor (foot) and Briean Boddy-Calhoun (knee) were limited in practice and listed as questionable on the injury report.

“I hope to get them both back, but I feel good that we will get one of them back for sure,” Jackson said.

** Elyria High School’s athletic department received a $1,000 grant from the Browns to use on helmets.

** Oklahoma quarterback and Heisman Trophy winner Baker Mayfield said he’ll attend the Senior Bowl. The Browns will likely have the option to coach there for the second straight year.