Do you believe in Christmas Eve miracles? Browns are hoping for another this year 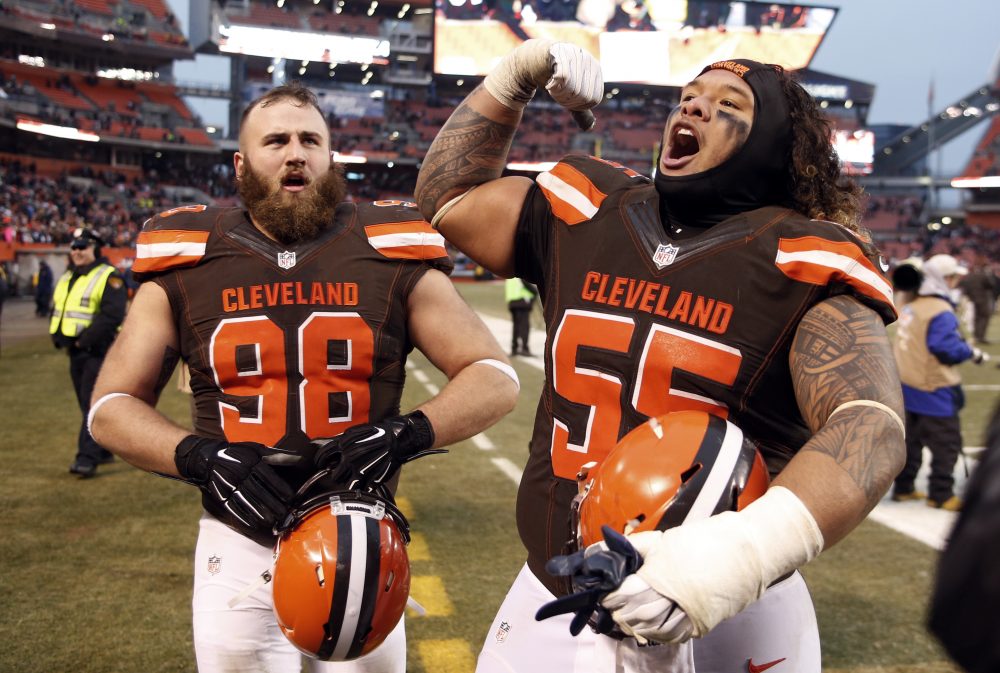 The message worked for its simplicity and timing.

A “Believe” ticket from the “The Polar Express” was placed above the daily schedule on the big-screen TV in the locker room Friday.

At 0-14 and 1-29 over the last two years, the Browns gotta have faith as they look for the second Christmas Eve miracle in two years.

“It was great to see the look on Hue Jackson’s face, all the coaches’ faces,” running back Isaiah Crowell said of last year’s lone win. “After all the hard work we put in, we finally got one.”

“It would be a great holiday present not just for everybody in this organization but for the city, for our fans and for everybody,” Jackson said of a repeat. “That is what we are going to try to accomplish.”

The Browns will face the Bears (4-10) in Chicago on Sunday as 6½-point underdogs. They are desperate to avoid joining the 2008 Detroit Lions as the only 0-16 teams in NFL history, and a loss would leave a New Year’s Eve date in Pittsburgh against the 11-3 Steelers as the last chance.

“Definitely putting something in the win column counts for something,” rookie safety Jabrill Peppers said. “Definitely no one wants to go 0-fer, that’s not a good look. So we definitely want to do everything in our power to change that.”

The Browns were in the same spot last year — they’re the only team in NFL history to start consecutive seasons 0-14 — when the then-San Diego Chargers visited FirstEnergy Stadium on Dec. 24. Jamie Meder blocked a field goal in the fourth quarter, Josh Lambo missed another as time expired and the Browns escaped with a 20-17 win.

Jackson and left tackle Joe Thomas were overcome with emotion in a raucous locker room.

“I didn’t even know a few people shed tears last year,” nickelback Briean Boddy-Calhoun said. “But it definitely shows you how much of a burden, how much of a weight was lifted last year when that happened. And we need to get that same feeling this Sunday, because it’s a lot of L’s, you know. A lot of L’s.”

“You don’t realize what you don’t have until you don’t have it, and we didn’t have it for quite awhile and I’m hoping we can do something about it this week as well,” he said. “Every week you go in thinking it’s a win, but if we can get one this week it will be pretty special. We’ve just got to play all our games on Christmas Eve if we pull this out.”

Jackson didn’t want to revisit last year’s win in meetings because this is a different team. But his last two wins as a head coach have come on Dec. 24 — last year and with the Raiders in 2011.

Chicago standout defensive end Akiem Hicks thinks that number is way too high. He guaranteed the Bears wouldn’t lose to the Browns.

“We won’t be that team,” Hicks told the Chicago Tribune. “Simple as that. We won’t let that happen.”

The Browns have too many losses to be overly offended but they noticed the comment.

“Talk is cheap,” No. 1 pick Myles Garrett said. “Any given Sunday, anything can happen, so we’ll see.”

They would clinch the No. 1 pick in the draft for the second straight year with a loss or a Giants win, but that’s the last thing on the minds of the coaches and players. Special teams coordinator Chris Tabor said it hurts to see empty seats in the stadium because of all the losing.

“When you don’t produce the way that you want to for (the fans), it is like anything — you have let them down,” he said. “It is disappointing because obviously, being here for so long, I understand what football means to Northeast Ohio, not just the Cleveland Browns, but college football, high school football and small college football. Football is an important deal around here. That is why I love coaching here because football is important.

“The wins are going to come. It is a bad place we are in right now, but we just have to stay the course and keep fighting through it. When you do that, good things will happen. I believe that.”

Peppers gave a simple reason for the Browns continuing to play hard.

“It’s all pride,” he said. “Anybody else would just lay down at this point, but we come in here each and every day in the cold, fighting, preparing the way we know how to prepare to go out there and give ourselves a chance to win.”

The Bears have been favored just seven times in John Fox’s three years as coach, and they’ve lost all seven. The door is open for the Browns to repeat their holiday celebration.

“I just remember obviously with that last kick, your heart sank,” fullback Danny Vitale said of last year. “After they missed that kick and we ended up winning, I just remember I couldn’t believe it — that feeling. We want to get to the point where that’s not such an outlandish feeling for us here.”

“It was a sense of relief, a sense of excitement,” Tabor said. “If we didn’t win the game, Santa probably wasn’t coming to the Tabor house.”

The Browns believe another miracle is possible this Christmas Eve.

Josh Gordon hasn’t lived up to his expectations, insists he wants to stick around and be part of the turnaround
Isaiah Crowell frustrated by season but says on “good terms” with Hue Jackson despite dust-up