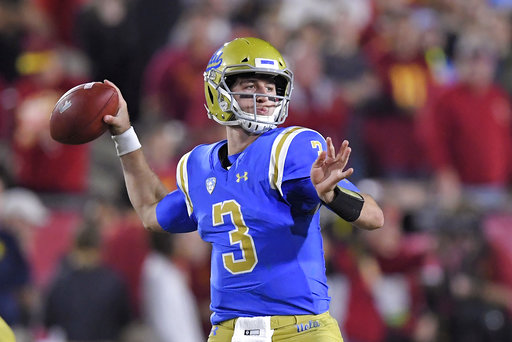 First you suffer through the embarrassment of a likely 0-16 season, then you get a cross-country lecture from a 20-year-old college junior.

A few weeks after rumors surfaced that USC quarterback Sam Darnold was considering staying in school to avoid being drafted No.1 by the Browns, UCLA quarterback Josh Rosen said this week, “I’d rather be a lower pick at the right team than a higher one on the wrong team.”

Gee, wonder who that was aimed at?

The Browns, of course, have the first pick in the draft, and Darnold and Rosen are expected to go 1-2 or 2-1, although they’d probably prefer that they go 2-3 or 3-2.

Rosen’s shot over the Browns’ bow is not to be confused, in content or intent, with that of Groucho Marx, who was not a quarterback, but knew his way around the hilarity huddle, once proudly declaring, “I don’t want to be a member of any club that will have me.”

But, hey, if we’re talking about the Browns trying to find a quarterback, there’s no more fitting place to start than with the Marx Brothers.

Rosen and Darnold are quarterbacks. The Browns don’t have one of those. More interesting still: the Browns are now apparently going to get serious about addressing this need.

That’s right, our long civic nightmare may be over.

Nothing screams “Do you have a quarterback?” more than a two-year run of 1-31. The answer, clearly, is no, and the Browns have a list of fired front office executives to prove it. A list that is as long as DeShone Kizer’s arms.

With serial trade-down artist Sashi Brown now out of the picture, the presumption is that new general manager John Dorsey will do what the Browns haven’t done in forever: take the quarterback position seriously.

That means using the No. 1 pick in the draft on either Rosen or Darnold, the consensus top two quarterbacks in this draft class, assuming both declare for the draft.

Rosen, who has won as many games in the NFL as all the quarterbacks on the Browns roster combined, is considered to be the top quarterback in the draft by all those who don’t think it’s Darnold, who appears, from the Browns’ perspective, to be the safer pick of the two.

Darnold on Wednesday denied that rumor from earlier this year that he’d stay at USC if the Browns had the first pick.

“I didn’t say anything about the Browns,” Darnold said. “I’ve never said anything bad about any team. I’d be honored to play for any team.”

Even, apparently, the Browns.

That makes Darnold the leader in the clubhouse, and Rosen the loose cannon still out on the course.

“I come from a wealthy, affluent family,” Rosen told Sports Illustrated in that publication’s 2016 college football preview issue, which also informed us that Rosen grew up in a Manhattan Beach, Calif., home valued at nearly $8 million.

One of the only red flags about Rosen is whether he takes football seriously enough. The inflatable hot tub in his dorm room, the Instagram of which went viral last year, did nothing to quell those concerns.

Nor did that Sports Illustrated cover featuring Rosen, with the blurb “Big arm? Big mouth? One way or another, you’ll pay attention to UCLA’s Josh Rosen.”

He’s certainly gotten the Browns’ attention, and not just because of that not-so-veiled right-church-wrong-pew quote mentioned above. He’s done this before. In high school, he chose not to attend a football powerhouse, telling Sports Illustrated: “I’m not a fan of powerhouses.”

Talk about a perfect fit for the Browns!

So Rosen went to high school elsewhere. “I like messing up the system,” he told SI.

A USC fan growing up, Rosen again surprised many by choosing instead to attend UCLA, because, “I really wanted to just mess with everyone.”

Now he’s obviously messing with the Browns, with that right-team, wrong-team mumbo jumbo, although if ever there was a team that would cause an elite college quarterback to mumbo his jumbo, it would be the soon-to-be 1-31 Browns.

On the other hand, Rosen’s ability to effortlessly throw a football for bull’s-eyes short, intermediate or deep, makes scouts sit up in their chairs.

It will take a special quarterback to come in and lead the Browns out of the sludge in which they’ve wallowed this century. Only two should be considered: Darnold, who some feel isn’t as advanced as Rosen right now, but might have a higher ceiling, or Rosen, the wealthy, affluent gunslinger, who likes to mess with everyone.

So maybe that’s your tie-breaker. To fix this mess, the Browns need a quarterback who enjoys a mess.

Commentary: In all the losing, it’s important to remember how much fans care about their Browns
Browns-Steelers Preview: 3 points of interest, 3 numbers to watch, the pick