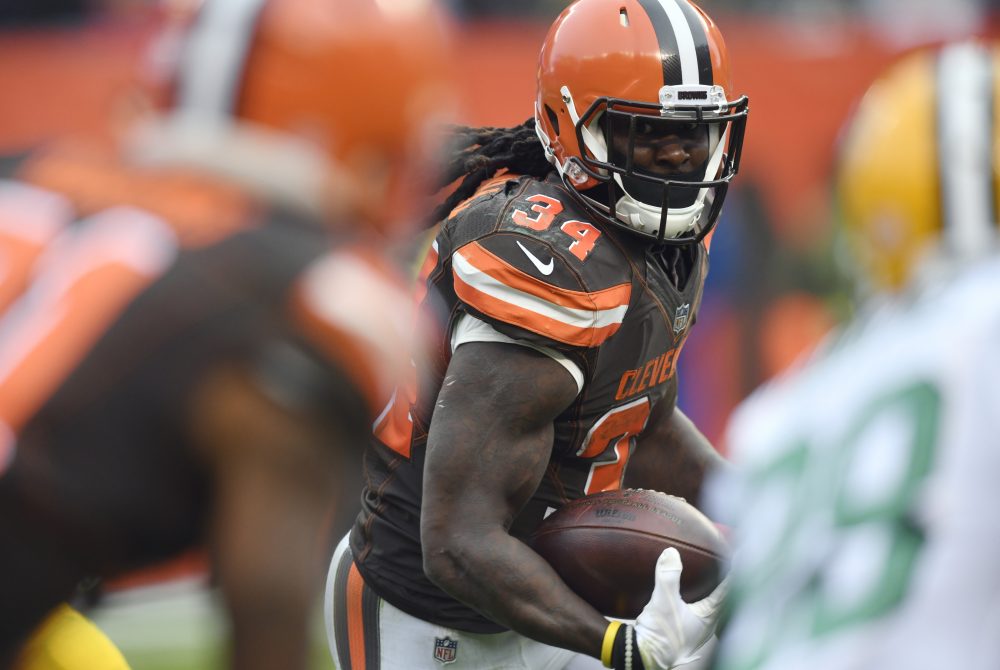 BEREA — The season was nothing like what running back Isaiah Crowell hoped or expected.

He anticipated a monster performance with tons of carries, yards and touchdowns that would inspire giant contract offers from the Browns and other teams as he approached unrestricted free agency in March.

The reality was much different.

He averaged only 12.7 carries through the first 15 games — all losses — and went long periods without getting the ball despite rushing for a solid 4.4 yards per attempt. The pedestrian numbers of 832 rushing yards and two touchdowns didn’t increase his value on the open market. He closed the year with a strained relationship with coach Hue Jackson after comments made by both.

“Of course, I wanted the monster year, I wanted to just have a big year and just prove to everybody my value and what I can do to help my team,” Crowell said Thursday. “It hasn’t really been exactly how I wanted it to be the whole season.

The conclusion to the season included a back-and-forth with Jackson through the media. Crowell said last week he was “upset” and felt “disrespected” after getting only one carry following a 59-yard run in the second quarter against the Ravens. Jackson responded by saying anyone could’ve run through the giant hole on the long gainer.

“At first I was kind of upset about it,” said Crowell, who “liked” a series of negative tweets regarding Jackson’s comment. “But we talked about it and he told me what he meant by it and I understood what he meant. Basically he said the play was blocked well. I agree with that, I just didn’t understand where that came in from the questions that were asked. That’s all.”

Jackson dismissing Crowell’s role in the team’s longest play of the season led to national speculation he’d lost the locker room. Crowell said he didn’t know if that was true but said he and Jackson are on “good terms” and “Hue is a good dude.”

“The job that he does, it’s not easy,” Crowell said. “So I’ve got a lot of respect and support for him.”

Jackson tried to clarify his comment from last week and stressed he still has the trust of the players.

“It wasn’t meant as a slight to him. I will say it again, a lot of people can run through those holes,” he said. “That is just what it is, but that is not putting Crowell down. I think we took it and made it more than what it was.

The next step for Crowell could be free agency, and he said owner Jimmy Haslam’s decision to keep or fire Jackson won’t influence a possible return. The Browns are expected to have about $100 million in salary cap space, so they can afford to keep him, especially considering he won’t turn 25 until Jan. 8.

“We are not an organization that can give players away,” Jackson said. “We have been through the gist of that. We need all of the players we have and then more.”

Crowell admitted earlier in the season he thinks about his contract situation all the time, so not getting the carries Jackson promised before the season was a consistent source of frustration. He was noncommittal when asked about wanting to return vs. testing the market.

“I think about just the contract situation all the time, but I don’t know how it’s going to end up or nothing like that. I don’t know, so I’m just waiting to see just like y’all are,” he said.

Crowell, who was signed in 2014 as an undrafted rookie, has said before he likes the city and his teammates but added a caveat to running back Duke Johnson’s comment Wednesday that he wanted to start and end his career with the Browns.

“I started here and Cleveland was the first place to give me an opportunity, so I would love for it to be that way,” Crowell said. “But me and Duke’s situations are totally different.”

Johnson has a year left on his rookie deal and has become a focal point of Jackson’s offense, leading the team with 68 catches for 618 yards and adding 76 carries for 328 yards. He tops the team with six touchdowns.

Crowell seemed poised for a Pro Bowl season after setting career highs last year with 952 rushing yards (on 198 carries), a 4.8 average and 40 catches for 319 yards. He had seven rushing touchdowns.

The letdown this season may have cost him money on his next deal, but he’s hopeful general managers across the league watch the film and see his talent.

“I really don’t know. Even if it did or if it didn’t, I can’t do nothing about it right now,” he said. “So I just try to take advantage of the opportunities that I do get.”

He said he’s not thinking about whether Sunday in Pittsburgh will be his last game with the Browns.

“I’m not really even focused on that,” he said. “I’m just trying to go into it and try to get a win with my teammates.

“Because I’ve got a lot of love and respect for my teammates. We’ve been battling all year, been working hard all year and I just feel like I want to get a win for these guys.”

Do you believe in Christmas Eve miracles? Browns are hoping for another this year
Myles Garrett would be disappointed not to face Ben Roethlisberger, expects more out of himself after frustrating rookie season