Browns down to last chance to avoid winless season, end 2017 on positive note 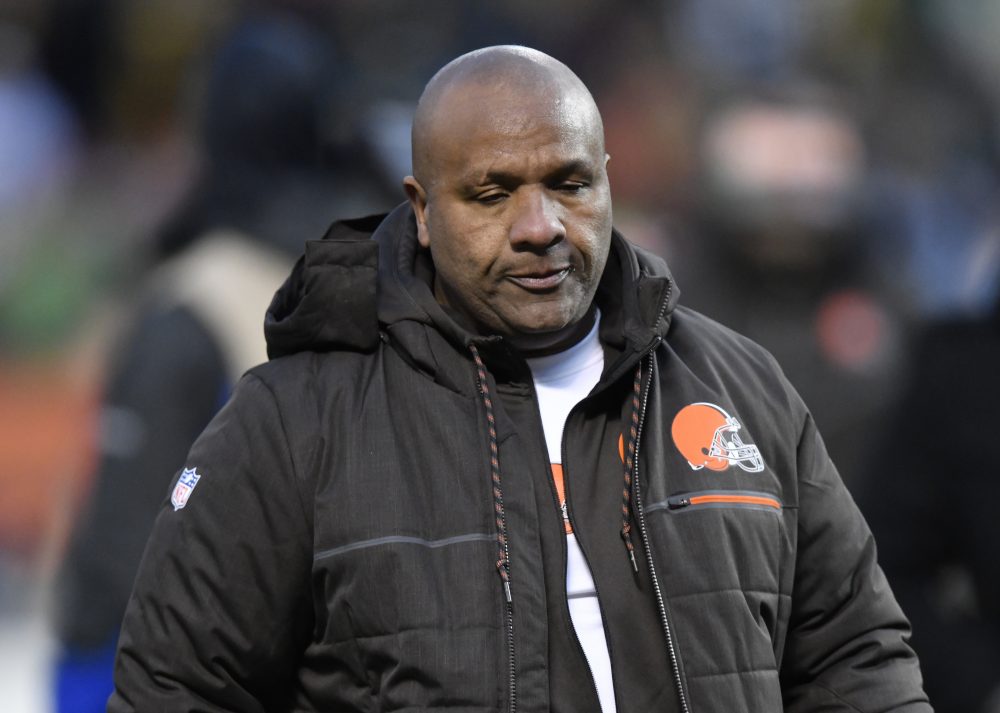 Two monumental issues hung over the Browns as they headed into the season finale Sunday at Heinz Field and they came together in the Saturday night meeting.

Coach Hue Jackson planned to give the pep talk — “I am just the guy to do it,” he said — about avoiding 0-16 with a victory over the Pittsburgh Steelers (12-3).

It’s the last chance to dodge history, and leave the 2008 Detroit Lions as the only 0-16 team in NFL history.

Despite the opposition of many fans, it’s not expected to be the last pregame speech for Jackson, regardless of outcome.

Jackson, the players and others in the organization believe owner Jimmy Haslam will stick to his pledge from earlier in the month to keep Jackson for 2018 and hopefully beyond. Jackson is 1-30 in two years with the Browns, the worst stretch in NFL history.

“I unequivocally believe without question that what Jimmy Haslam said is what is going to happen here,” Jackson said during the week.

Haslam is expected to continue his practice of speaking to reporters minutes after the finale and confirm his plan to keep Jackson. It would go against his recent tradition of firing coaches after the season ends with a loss to Pittsburgh.

First will be the battle with history.

The Browns have been flirting with 0-16 since last season, when they finally won on Christmas Eve after an 0-14 start. The losing continued throughout 2017, with only a New Year’s Eve upset keeping them from infamy — and a sarcastic “Perfect Season” parade scheduled by disgusted fans for next weekend.

“I’ll say it hasn’t been brought up team-wide, but at the end of the day we all know,” veteran cornerback Jason McCourty said. “It’s been mentioned. We don’t want to be on that side of history, so guys are preparing to go out and win a game on Sunday.

“I would say there’s probably been a sense of desperation for a while now, but this is the most desperate, obviously. If you don’t win Sunday, there’s no way around it.”

The losing has already reached historic levels, with two wins in their last 42 games. They don’t want to add 0-16 to the resume.

“Nobody wants to have that tied to their name,” Jackson said. “We are going to let the outcome of the game decide itself by how we play. Then we will have to deal with everything from there, but I know we are doing everything we can to go to Pittsburgh and win a football game.”

Dan Orlovsky, who played quarterback for the Lions in 2008, wrote for The Athletic about the long march to 0-16 and how it felt like a “funeral.” Despite the same journey, Browns headquarters has remained surprisingly lively and optimistic.

“It’s all about the culture that has been built by the head coach,” said left tackle Joe Thomas, who’s on injured reserve. “You look at how Hue is in the locker room and the meetings, he’s the same guy every single day. He brings toughness and energy to everything we do and I think that reflects on the players in here.

“I’ve been around some teams and some coaches where things start going bad and it’s a funeral. People stop showing up, doing their extra work, they stop giving great effort at practice and it shows on the field and then you just end up getting blown out the last five, six weeks of the season and I don’t think you see that here.”

Jackson passed the credit to the players.

“I can’t say it enough about these guys, they walk in the building, they go to work,” he said. “It is why I care about them so much. They have done everything I have asked them to do. Their spirit, their practice, obviously, it hasn’t translated to where we want it to be, but it still makes me believe we are on the right track with the work process we have here and how we go about our meetings.”

The Browns will need to buck the odds to beat the Steelers, even if coach Mike Tomlin, as expected, sits Pro Bowl quarterback Ben Roethlisberger and Pro Bowl running back Le’Veon Bell to ensure their health for the playoffs. The Steelers have won five straight in the series and 25 of 28, including 13 straight at Heinz Field.

“I don’t think about the whole thing because I just look at it this way, I just want to finish it right. I just want to get the win,” special teams coordinator Chris Tabor said of 0-16. “Whatever story is written after that, the story is written, but if I know that I finished it right, then I can lay my head on the pillow.”

The players have tried not to place too much importance on avoiding 0-16.

“Nobody really cares about the record,” rookie safety Jabrill Peppers said. “Everyone makes a big deal out of it, we know what our record is. It is what it is. In this league that’s two main things that win ballgames, execution and taking the ball away, and we’re not doing those the way we’re supposed to be right now and our win-loss record shows it.

“Each and every week we come out prepared. We’re 0-15, but there are a lot of people in the world who would die to be in our position. People who are down don’t stay down forever. When we get this thing rolling, it’s just going to be funny to see how everyone wants to flip the narrative.”

The stigma attached to 0-16 is real, but the Browns repeatedly referred to the matchup vs. Pittsburgh as only one game.

“I’m not even thinking about 0-16. I’m just trying to win a ballgame,” linebacker Christian Kirksey said. “Everything else will play itself out. We’re trying to win, so for me, putting 0-16 in your mind is not a good thing to do.

“We’re just trying to win this game, and hopefully this will roll into next season.”

“I have no doubt in my mind,” Kirksey said. “We’ve got the right people here. We’ve just got to do it.”

Myles Garrett would be disappointed not to face Ben Roethlisberger, expects more out of himself after frustrating rookie season
Josh Gordon believes team can use 0-16 as springboard to success, wants to be a leader in that pursuit