Steelers 28, Browns 24: Cleveland finishes 0-16 season with fourth-quarter blunders, winds up on wrong side of history 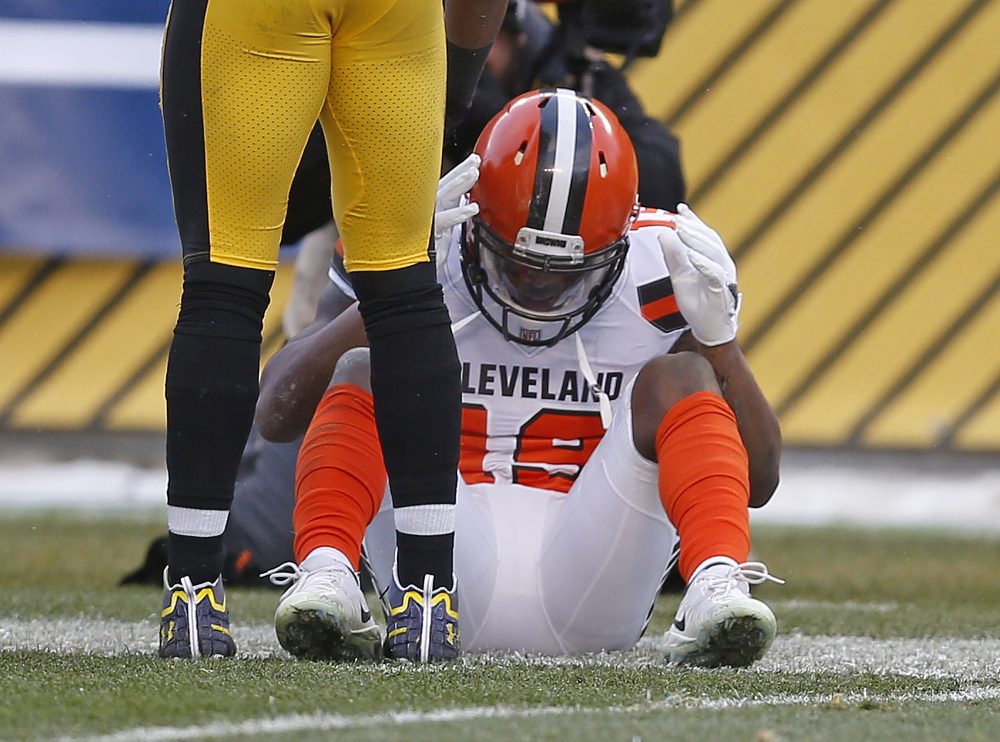 Receiver Corey Coleman walked straight to the locker room when the game was over, then sat almost motionless at his locker for nearly a half-hour, head in his hands.

The zero is permanent. So is the shame.

The Browns lost 28-24 to the Pittsburgh Steelers on Sunday at frigid Heinz Field, completing the winless season.

“You don’t want to be on this side of history,” cornerback Jason McCourty said. “It’s awful. There’s no words to describe how bad this year has been. I’m really just glad it’s over with.”

Jackson told the players their fate was unfair.

Owner Jimmy Haslam quickly announced Jackson would be back despite being 1-31 in two seasons, the worst stretch in NFL history. He’s glad to be returning but is painfully aware he’ll own 0-16 forever.

“This is going to stay next to my name, this organization’s name, these players’ names for the rest of their lives,” Jackson said. “Nobody wants that. We’ll wear it until we can take it off. But we’ll take it off soon. I promise you that.”

The Browns have a new general manager in John Dorsey, the Nos. 1, 4, 33 and 35 picks in the 2018 draft — Nos. 4 and 35 are through trades with the Houston Texans — and an expected $100 million in salary cap space, so the ingredients for a turnaround are there. But 0-16 and all it entails must be dealt with first.

The embarrassment of going a whole season without a win is bad enough. It was punctuated by the Steelers (13-3) resting many of their best players and still winning.

Five Pro Bowlers were inactive for Pittsburgh, including quarterback Ben Roethlisberger, running back Le’Veon Bell and injured receiver Antonio Brown. Yet the Steelers (13-3) outgained the Browns 114 yards to minus-16 in the first quarter, scored three offensive touchdowns in the first half and added a 96-yard kickoff return in the third quarter.

The Browns tried to rally with the first two touchdowns of second-year receiver Rashard Higgins’ career but were sunk by a pair of costly turnovers in the fourth quarter and a critical drop by Coleman.

Turnovers, mistakes and losses were the story of the season. They’re last in the league with a minus-28 turnover differential.

“That’s kind of who we are,” Jackson said. “We fight against it. Those things just show up at times when we don’t need them to.”

Running back Duke Johnson, the team’s most reliable playmaker all season, fumbled at the Pittsburgh 31-yard line after a 32-yard gain on a screen pass. On Cleveland’s next fourth-quarter possession, Kizer underthrew rookie tight end David Njoku for his league-high 22nd interception of the year.

On fourth-and-2 from the Pittsburgh 27-yard line on the Browns’ final possession of the season, Kizer escaped a sack, popped free and threw a strike to Coleman at the 11. He dropped it with 1:46 left and the Browns down by four.

Jackson hadn’t yet talked to Coleman.

“I’ll put my arms around him and say, “Hey, you’ve got to make those plays,’” Jackson said. “And he knows that. It’s tough. That play will be remembered.”

They have dropped six straight to Pittsburgh and have only three wins in the last 29 games of the series. They’ve lost 14 in a row at Heinz Field.

Kizer, the No. 52 pick out of Notre Dame, started 15 games and was at the bottom of the league in just about every key statistic. He rallied Sunday, going 16-for-30 for a career-high 314 yards with six sacks, two touchdowns, an interception and a 98.5 rating. He added 61 yards on six rushes.

Nobody on the 2017 Browns did. And a group of angry fans have planned a “Perfect Season” parade for Saturday around FirstEnergy Stadium.

“I feel for the fans,” McCourty said. “They’ve had to go through some pretty bad seasons, 1-15 last year, the team was 3-13 the year before. It’s frustrating for them as well.

“I appreciate the fans. For us to finish 0-16, they have the power to do whatever they like.”

Receiver Josh Gordon caught four passes for 115 yards, including a 54-yarder, in his fifth game back from suspension. He said he’ll use 0-16 as motivation.

“It’s just like a steppingstone to get to the next point,” he said. “It’s going to remind me the rest of my life. So I don’t look at it as a negative thing. I look at as something to build upon.

“This is a tough scenario, probably a historic scenario, but it’ll never be like this ever again. But what it’s really going to take to go through a full offseason and to make sure it never happens again, it starts today, it starts now.”