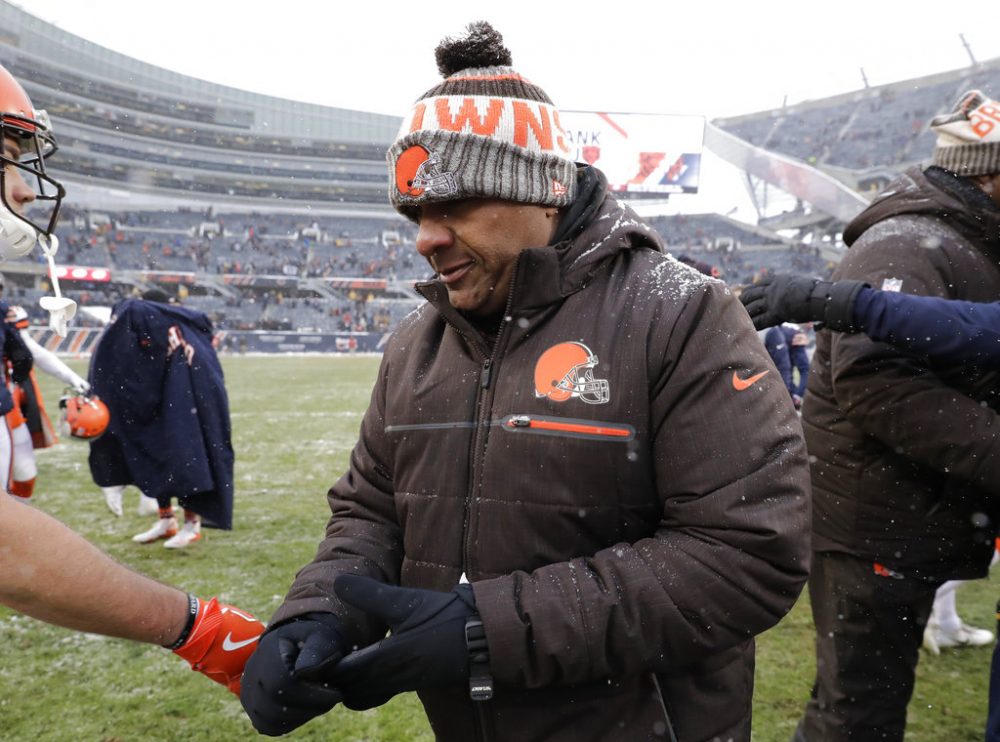 Well, here we are. On the precipice of the most shameful season in Cleveland sports history.

The only team in history to go 1-15 and be WORSE the following year, will give us one final baleful eyeful Sunday in Pittsburgh, where too many Browns seasons, too many careers of Browns executives and coaches, and too many dawg day afternoons for Browns fans go to die.

The playoff-bound 12-3 Steelers will use their JVs to chase the Browns’ varsity out of Condiment Field and back to Cleveland, wearing an 0-16 shiner, as the rabbit hole-bound Browns disappear for the next month or two, along with the NFL’s other have nots, never weres, and has beens.

The good news is that the losing stops after today, only because after today there are no more games. After today, it’s all over but the firings, which actually began a few weeks ago when serial trade-down artist Sashi Brown was asked to leave the building.

Under Brown, the Browns passed on Carson Wentz, Jared Goff, Mitch Trubisky, and Deshaun Watson — which is why the Browns eventually passed on Brown.

Brown acted as though franchise quarterbacks are a dime a dozen, when in reality it’s Browns chief football decision makers who are. Just ask somebody who currently isn’t: Brown himself.

This is Johnstown, after the flood.

Can owner Jimmy Haslam be serious when he says he’s bringing Hue Jackson — who in two years as coach of the Browns has won only one more game than YOU have — back next year?

How can Haslam even bring himself back next year?

How can the Browns react to going 1-31 over the last two years by merely getting rid of a lawyer trying to be a general manager, then stating confidently, “OK, we should be good to go.”

But Haslam isn’t going anywhere. NFL owners, even the owner of a team that loses all of its games, see the value of their franchises constantly going up year after year.

You really don’t have to do anything but just keep showing up.

Haslam is very good at that.

Hence, The Hue Watch (the Hue View?), which begins today and ends when Jackson does or doesn’t get fired — whenever that is.

An argument could be made that Jackson shouldn’t be fired. It goes something like this. Actually, it goes ONLY like this: Jackson can only coach the players he’s given, and in his two years on the job all Brown gave him was a bag of doughnuts.

The only other team in NFL history to go 0-16 was the 2008 Detroit Lions, who fired coach Rod Marinelli after that season. In 2009, the Lions used the first pick in the draft on quarterback Matthew Stafford. Two years later they went 10-6 and made the playoffs.

The Browns, of course, have the first pick in the draft, and it’s presumed that they’ll take a quarterback. One of the candidates is USC’s Sam Darnold, who looked like DeShone Darnold in a 24-7 loss to Ohio State in the Cotton Bowl, throwing one pick-six and fumbling twice, a performance that screamed for some whispering.

Jackson, remember, is Haslam’s guy, not new GM John Dorsey’s guy. General Managers tend to prefer — the ones with clout insist — on being able to pick their own coaches.

But that’s on teams that know what they’re doing. Teams that are not, you know, what the Browns are.