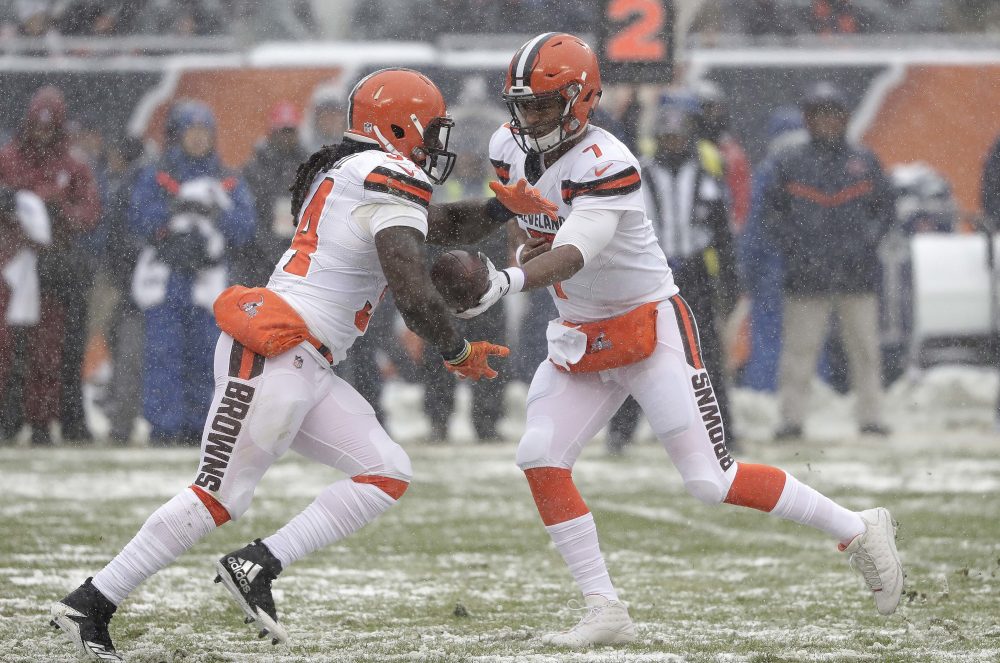 Q: What are the odds running back Isaiah Crowell is back next season?

A: I’d put the chances he plays for the Browns at 40 percent. Players who hit free agency don’t normally stay with their teams, and Crowell has been frustrated throughout the season with a lack of consistent opportunities. He’s rushed 191 times for 832 yards, a 4.4 average and two touchdowns.

But there are a few reasons I think he could be back. As coach Hue Jackson said last week, the Browns can’t afford to give away good players, and Crowell is a legitimate starter in the league. So new general manager John Dorsey should at least make a respectable offer in hopes of saving a draft pick to address one of the team’s many other needs.

Also, Crowell doesn’t turn 25 until Jan. 8 and hasn’t missed a game, so he has a desirable mix of youth and dependability. The free agent market for running backs often disappoints, so he could find his best offer in Cleveland. Finally, he also has been consistent that he enjoys the city and teammates, so if the money’s right, I think he’d be glad to return.

Q: Is Andrew Berry, vice president of player personal for the Browns, the same guy we unloaded Trent Richardson to?

A: Berry was with the Colts in 2013 when former Browns CEO Joe Banner surprisingly dumped Richardson in one of his best moves. Berry was pro scouting coordinator, so he certainly was involved in the process. But it’d be unfair to put the trade all on him, as general manager Ryan Grigson had the final say. The Colts were trying to make a Super Bowl push, so their motives were good, but they badly judged Richardson’s ability to find a hole and explode through it at the NFL level.

Grigson was fired after last season by the Colts and later hired by the Browns as senior personnel executive.

Q: So how much better could the talent be next year? The team will get younger not older.

A: I see why you would say that because they are scheduled to have 13 draft picks, including five in the first two rounds. But new general manager John Dorsey seems determined to try to win right away — it’s about time — and I’d be shocked if the team again was the youngest in the league when next season started.

Dorsey should have about $100 million in salary cap space and will certainly use a chunk of it on veterans to balance the youth he inherited. Dorsey could also trade some of the plethora of picks to move up in the draft. After two years of Sashi Brown’s analytics, quality should top quantity.

Q: Doesn’t UCLA quarterback Josh Rosen have a history of concussions? Not good for any QB, especially with the Browns.

A: Rosen had two concussions this year, and the second was given as the reason he missed the Cactus Bowl last week.

Plenty of things go into consideration when drafting a quarterback at No. 1, and concussion history must be included. Rosen is also an intelligent young man whose dad is a spinal surgeon. So it’s fair to wonder if at some point he’ll decide the fun and money of the NFL isn’t worth risking his brain health.

Mailbag: Does Hue survive 0-16? Pick a Christmas movie? Positions to target in free agency?
Mailbag: Is Alex Smith the target and how much will it take to get him? Parade backlash? What’s up at OC?