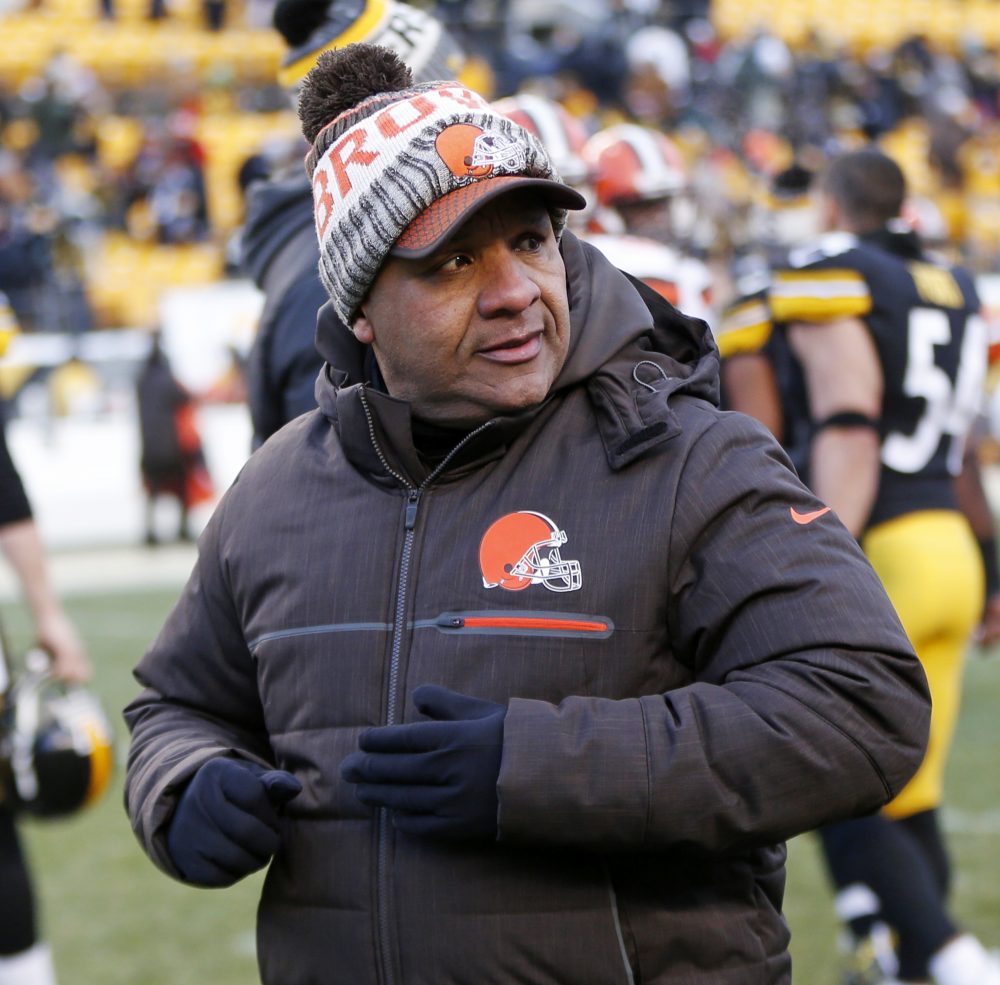 And, oh, were they stacked against him.

Owner Jimmy Haslam stood in front of a brick wall across from the visiting locker room in the bowels of Heinz Field on Sunday and stood by his coach, who’s won one game in 32 tries. The Browns finalized a historic 0-16 season a few minutes earlier with a mistake-filled fourth quarter to seal Pittsburgh’s 28-24 victory.

Jackson will return for a third season in 2018, just as Haslam guaranteed on Dec. 7 and again the next day after firing head of football operations Sashi Brown and hiring John Dorsey as general manager.

“I don’t think that I need to say it, but the way the world works today, I want to say this: Hue Jackson will be back as our coach next year in 2018,” Haslam said. “You could say a lot of things about us this year, but down to the last minute or two minutes, our guys played hard. I think the primary thing an NFL coach has to do is provide leadership. I think Hue has provided great leadership.”

Jackson will be back despite the worst two-year stretch for a coach in NFL history and only the second 0-16 season. Those are just the first points of logic and history he defied by getting a third season on the job.

Haslam has been notoriously and admittedly impatient, firing four general managers and three coaches since buying the team for $1 billion in 2012. Jackson would be the first coach under Haslam, and the first since Romeo Crennel from 2005-08, to return for a third season with the Browns.

But Haslam has always liked Jackson, dating to his days as Bengals offensive coordinator, and he hasn’t fallen out of favor.

“If you go back two years ago, I think Hue was one of the hottest assistant coaches out there,” Haslam said. “And I don’t think Hue’s lost his magic on how to call plays or how to run an offense or how to coach a team. And I think it’s our job – John and his group — to get him the players to do so.

“And I’m not saying this is going to be easy, but I’m confident we’ll do this. We do not give up easily. We’re not going to give up. Is it disappointing? Hell, yeah, it’s disappointing. Is it discouraging? To a certain point. But we’re going to get this done.”

Many fans, some of whom have planned a sarcastic “Perfect Season” parade for Saturday around FirstEnergy Stadium, wanted Jackson to follow Brown out of the building. Haslam chose continuity and a semblance of stability.

“We have the best fans in the NFL and when we win Hue Jackson will be their hero. I’m convinced of that,” he said. “It’s all about winning and losing, and until we start winning we’re going to catch a lot of grief and we deserve it.”

Jackson will take a swim in Lake Erie after guaranteeing the record would improve after a franchise-worst 1-15 last season. He knows the fans aren’t pleased with him.

“They can say whatever they’d like,” he said. “I don’t think anyone else could have done this job.

“I understand where our fans are. Hopefully in time that will change. They don’t like it now. I don’t like it any more than they do. But this is the hand they’re dealt and we’re dealt. We have to fix it. That’s what we’re going to do.”

“I’ve been through it time and time again, new GMs, new owners, everything. So I’d much prefer to have it a little more stability there than go through that all over again,” said receiver Josh Gordon, who had four catches for 115 yards and set up Duke Johnson’s 2-yard touchdown run with a 54-yard catch. “Despite the record, give us the opportunity to build and do something. So I’m appreciative of that.”

Jackson also overcame poor game and time management throughout the season and the failure to develop a quarterback in two seasons. Haslam decided the league’s youngest roster wasn’t talented enough to pin the losing on Jackson.

“It’s tough to win with this many young players,” Haslam said. “It is. Particularly in the quarterback room.”

The final obstacle for Jackson to escape the mounting evidence against him was the hiring of Dorsey to replace Brown. Dorsey and Jackson didn’t have a relationship, yet Dorsey was willing to accept him and apparently didn’t ask Haslam to make a change.

Haslam said he believes the pair will succeed together. Dorsey will have the Nos. 1, 4 and 33 picks in the 2018 draft, along with two others in the second round.

“I’m in two meetings a week with them where I can tell you there is one goal and one goal only, and that’s to turn the franchise around,” Haslam said. “So they are working extremely well together. They’re off to a good start.”

Jackson pointed directly to Dorsey as a key reason he believes the Browns will be able to right the ship that’s been sinking for a decade.

“I think this is going to totally change. I think we’re going to make some decisions to get this organization up to winning as fast as we can,” he said.

Haslam dismissed a question about “buzz” he wants to sell the team.

“That really aggravates me. Nothing could be further from the truth,” he said. “Our execution might not be very good and I’ll take all the grief for that, but commitment, you can’t question. So I unequivocally say that is false and plan on owning the Browns for a long time and turning this franchise around.”

He said the blame belongs to everyone in the organization, starting with him. The Browns are 20-76 since he agreed to buy the team before the 2012 season.

“Our record is unacceptable, and we accept full responsibility for that,” Haslam said. “Ownership, personnel, coaching. We can all do better, OK? And I don’t think there’s anybody that would tell you any differently. I know I could do a helluva lot better.

“So we’ve got a long way to go, a lot of work to do and anxious to get after it.”