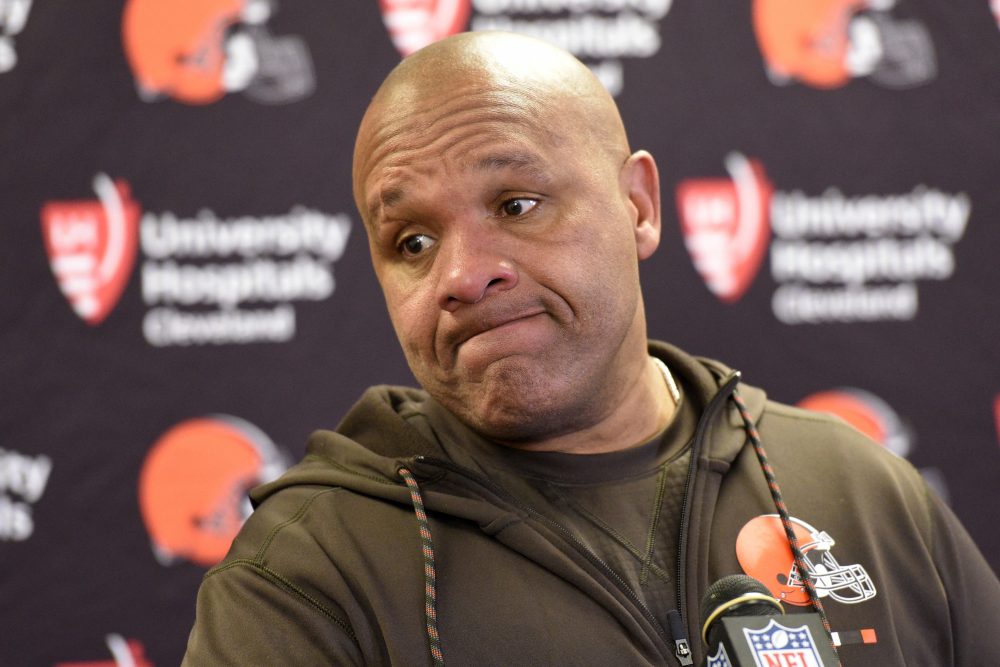 BEREA — Hue Jackson said the stigma of only the second 0-16 season in NFL history will force the Browns to sell themselves.

To fans. To potential draft picks. To free agents.

The players in the Browns locker room must be included on the recruitment list. As they cleaned out their lockers a day after the 28-24 season-ending loss to the Steelers, resentment lingered from season-long criticism of the roster by Jackson and defensive coordinator Gregg Williams. New general manager John Dorsey piled on when he said the previous regime didn’t get enough “real players.”

“I think it’s bugged probably everybody in this locker room when you’re one of the guys on the team that’s playing your heart and you’re putting everything into it,” said veteran cornerback Jason McCourty, who said the talent is “a lot better” than the record. “You don’t want to hear about what you don’t have. You want to make the best of what you do have. I think as a player you just hate to hear that from anyone.

“I think that’s probably one of many different things that have gone on throughout this season that stopped us from winning a game.”

Running back Duke Johnson was listening to McCourty’s interview and raised his right hand in agreement. He echoed the belief the talent was better than given credit and said comments to the contrary disrespected the players.

“It doesn’t bother me, but it may bother some people to the point where it upsets them,” Johnson said. “We had more talent than what our record showed. One hundred percent. It’s not even close.”

The statements suggest the players blame Jackson for the record. McCourty was asked if coaching was the problem.

“Happy I don’t have to answer those questions,” he said with a laugh. “That’s not my job. Our job is just to play.”

Johnson said 0-16 can be blamed on a lot of things.

“Whether we didn’t execute, we didn’t make all the right plays, there’s just a lot that goes into to it,” he said. “We went 0-16. I don’t think anyone got the best and most out of anybody, players, strength staff, coaches, trainers, our good people in the cafeteria.”

McCourty said he couldn’t pinpoint why the results were so bad but assumes after two historically bad seasons a lot of things will change within the organization.

“You can’t keep doing the same thing and think you’re going to get different results,” he said. “That’s the definition of insanity. So obviously there’s a lot of things that aren’t right.”

Jackson said he respected McCourty’s opinion that the roster was good enough to win games. He didn’t want to get into a debate over whether other coaches would’ve done better but objected to the suggestion he has portrayed himself as a victim.

“I have never said I’m a victim. I said it the other day, I’m just as big of a part of this as anybody,” Jackson said. “I am the leader of this, part of the leadership group of this. I have been very disappointed in all of it, but at the same time, we are going to fix it.”

He apologized to fans, thanked them for their loyalty and acknowledged he won’t be able to change their minds about him until September.

“Our fans, they truly want results,” he said. “I understand that and that is something we need to give them, but nothing I say is going to make a difference. The only way we change the things that are said is to get to winning. That is what we have to do.”

Jackson was still reeling from the finality of the season and permanence of 0-16.

“It is awful,” he said. “This is going to be next to my name for the rest of my life. This is part of my legacy now, some of the players that are here, the coaches that are here, everybody.”

He and McCourty agreed on the sting of being on the wrong side of history.

“Hopefully they forget my name as the years go by,” McCourty said. “A terrible thing to be a part of. Wish you weren’t a part of.”

Before Jackson took the podium at 8:15 in the morning, Lions coach Jim Caldwell had been fired after going 9-7. Chicago’s John Fox followed after 5-11.

“I am very fortunate and blessed,” he said. “I thank Dee and Jimmy (Haslam) for that because there very easily could be somebody else sitting up here.

“Obviously, they see something — I am very fortunate that they do — that I can lead this organization and this football team to where it needs to go.”

Jimmy Haslam cited “great leadership” and “magic” as a coordinator as reasons to keep Jackson. Again asked to defend his job performance, Jackson mentioned the development of some young players, including Johnson, and the team playing hard and sticking together through the difficult season.

“There are a lot things that we have done well,” he said. “We just have not won the games.”

He’s taken a ton of criticism for saying twice that not many coaches could’ve done the job he has the last two years. He said Sunday many would’ve said “uncle” and quit, then backpedaled Monday.

“No, it is not about quitting,” he said. “I am not trying to sound arrogant, flippant or anything like that. I just think these situations are hard when you don’t win. I don’t think the average person could go through that.

“I am grateful and thankful that I do have enough strength, courage and fight and have enough support — that is the biggest thing to me — support from fans, support from the people in our building to get through this so we can get on the other side.”

Jackson has the staunch, sometimes stupefying, support of the Haslams and remains liked by many in the locker room.

“When we say we’re talented and we’re better than 0-16, it’s not pointing fingers to a coach. It’s not pointing fingers to the players. It’s just saying we know what type of talent we have, and we’ve just got to learn how to finish games,” linebacker Christian Kirksey said. “He’s our leader, and he’s going to take all the blame, he’s going to take all the heat. It shows that he doesn’t mind putting all the pressure on him. As a player playing for him, all you want to do is have his back.”