Notes: Hue Jackson will consider adding coordinator and giving up calling plays, along with other changes to staff 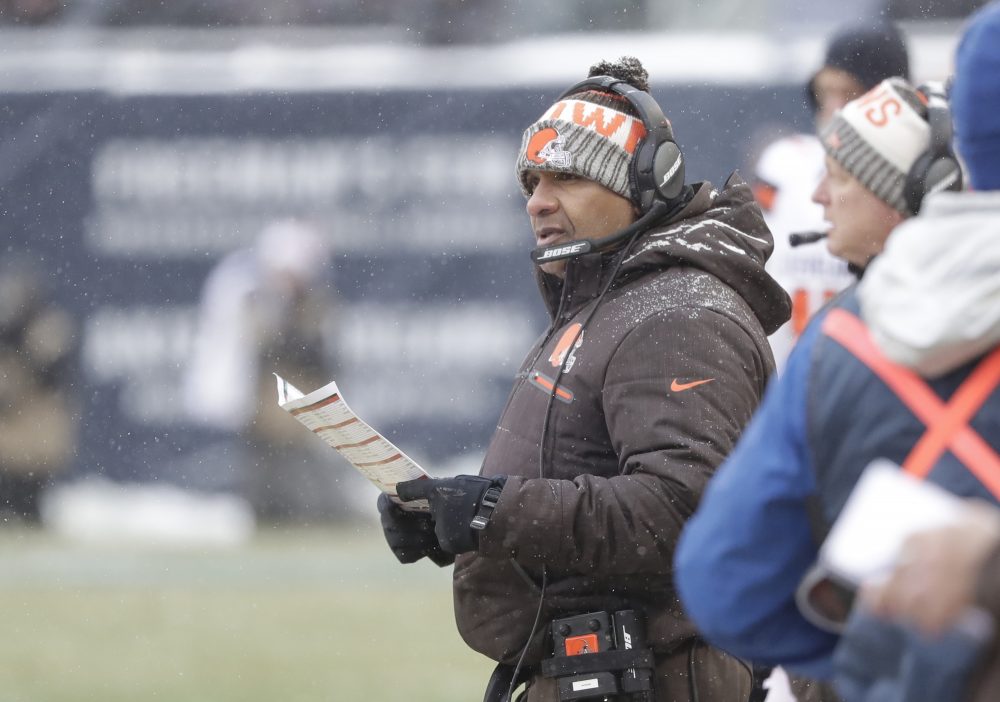 The Browns’ 0-16 season could be followed by significant changes to the coaching staff.

Coach Hue Jackson reiterated Monday he’ll investigate hiring an offensive coordinator and would be open to having the new hire call plays. Jackson has been his own coordinator and play caller in his two seasons that have yielded one victory.

“It is something that I have thought about,” he said Monday. “The staff decisions for me will be from reflecting over the next week or so and just seeing where we are, seeing what I think I need to do to help this organization be the best it can be.

“That is one of my jobs as a leader is to go back and look how can we improve and how can we get better in all of the areas.”

After last season, Jackson fired defensive coordinator Ray Horton and hired Gregg Williams. The defense went from 31st overall and against the run to 14th and seventh this year.

Jackson could have a decision to make regarding special teams coordinator Chris Tabor. He arrived in 2011 with coach Pat Shurmur and has survived three coaching changes because his units have been historically strong. But the decisive 96-yard kickoff return for a touchdown Sunday in the 28-24 loss to the Steelers was the latest example of breakdowns in the kicking game this year.

“Have to play better and have to coach better,” Jackson said when asked about the special teams struggles. “That is what it is.”

Jackson said he’ll make the offensive coordinator hire, not new general manager John Dorsey, if he decides to add one. He said he’ll consider members of his staff.

Jackson has struggled with game and clock management, which can be a result of having too many responsibilities during the week and on gameday.

“At some point in time I would like to do differently because I think it is important to coach the team,” Jackson said. “I did not want to put that pressure (of play calling) on somebody else early in this situation. Now knowing, now seeing and now truly believing in that the team is going to take a step forward, everything is on the table.”

Jackson made his reputation as a coordinator and play caller and insisted he didn’t want to set up someone else for failure by asking him to do those jobs on talent-deficient teams the last two years. He conceded his workload may have been too much.

“When you look back, there are all kind of decisions that you could say, ‘Man, I wish I would have done this differently,’” he said. “I don’t regret (not) putting somebody in a situation to not be successful. I just don’t believe in that. I believe I got this job because I was very good at what I did, which was call plays. Obviously, that hasn’t been the case here that way.

Jackson and Dorsey have already spent “a lot” of time discussing quarterbacks and what they look for in one.

“I feel very comfortable with that process that we are going through,” Jackson said.

He stated last year his profile for a quarterback includes height of at least 6-foot-2.

“I think we are very close on the profile fit,” he said.

Oklahoma’s Baker Mayfield, the Heisman Trophy winner, is expected to measure around 6-0.

Mayfield said he’ll attend the Senior Bowl later this month, and the Browns may be offered the opportunity to coach one of the teams for the second straight year. A decision is expected late this week.

“If we have the opportunity to, then we would,” Jackson said. “Anytime that you can be around those guys is great because you get to see them in a whole different light.”

Receiver Josh Gordon earned the trust of Jackson in his two months since returning from his latest drug suspension, so much so that Jackson said he believes he can count on Gordon for the future.

“Here comes the next phase for him, so he needs to go handle that the right way once he leaves here. I do expect Josh Gordon to be a contributing member of this football team, come back and get ready for the offseason and the season.”

** The Browns will likely add a veteran quarterback and draft another, but Jackson said DeShone Kizer will be back and in the mix.

The opponents are set for next season.

In addition to home and road games against AFC North rivals Pittsburgh, Baltimore and Cincinnati, the Browns will host Carolina, Atlanta, the Los Angeles Chargers, Kansas City and the New York Jets.

Middle linebacker Joe Schobert, a fourth-round pick in 2016, will take the place of injured Steelers linebacker Ryan Shazier in the Pro Bowl assuming he passes his exit physical. Schobert was voted the first alternate. He led the Browns with 142 tackles.

** Duke Johnson led the team in receptions (74) and receiving yards (693), setting franchise season marks for a running back.