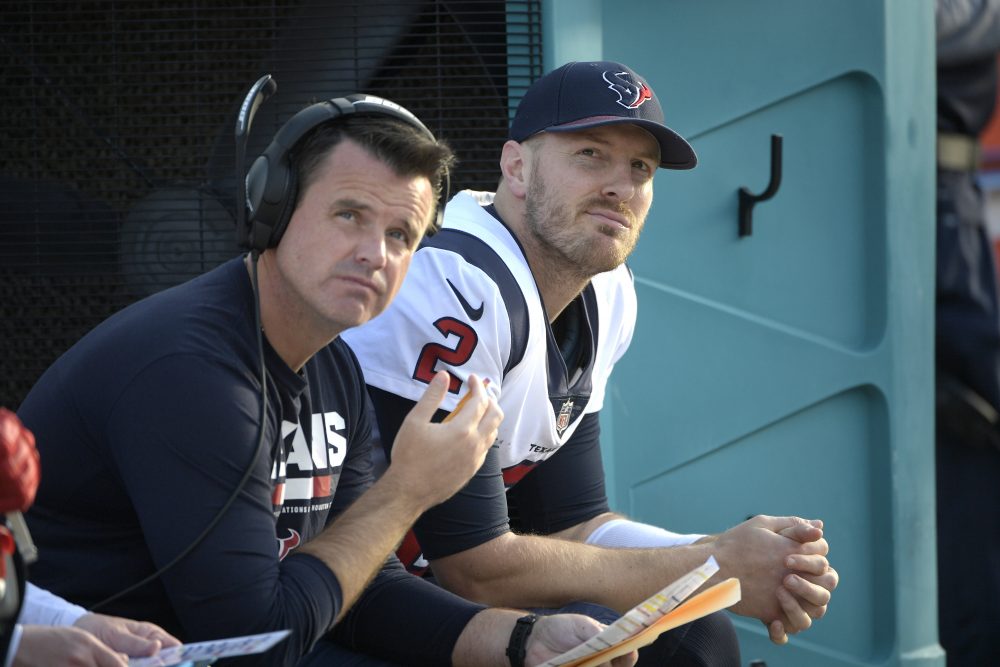 Sean Ryan, Deshaun Watson’s quarterbacks coach with the Houston Texans, will be considered by Browns coach Hue Jackson in his search for an offensive coordinator.

The Browns were granted permission by the Texans to interview Ryan.

“I think he has a real bright future,” Texans coach Bill O’Brien said Tuesday. “Sean’s goal is to call plays in the league. I don’t want to stand in his way of doing that.”

O’Brien is the play caller with the Texans. Jackson has served as coordinator and play caller in his two years with the Browns but went 1-31 — the worst stretch for a coach in NFL history — and admitted Monday he might have taken on too many roles.

He said in the wrapup to the 0-16 season that he’d evaluate his staff and could make changes. He said he’d consider letting someone else call the plays, but that could be easier said than done for someone so involved in the offense.

Ryan joined the Texans in 2016 as receivers coach and moved to the quarterbacks for 2017. Watson, a rookie from Clemson, was having a stellar season until tearing his anterior cruciate ligament in practice after six starts.

He was tied for the NFL lead with 19 touchdown passes at the time of the injury, the most over a quarterback’s first seven career games since 1970. He went 3-3 as a starter, and the Texans finished with four wins.

The Texans used the No. 12 pick on Watson after acquiring it from the Browns, who received a first-round choice in 2018 that turned out to be the No. 4 pick.

“One of the best in the business,” Texans quarterback Tom Savage tweeted of Ryan.

He also worked as an assistant coach at Columbia, Harvard and Boston College.

Receiver Corey Coleman was named in a civil lawsuit, along with his brother Jonathan, Jared Floyd and others, following an alleged assault Dec. 31, 2016, in his condominium building in downtown Cleveland.

A lawyer for Adam Sapp filed a suit Friday in Cuyahoga Common Pleas Court seeking at least $25,000 for past and future medical costs, as well as punitive damages.

The lawsuit claims Sapp was beaten and knocked unconscious, then his bloody body carried into a parking garage.

Coleman wasn’t charged in the criminal case after tests by the Cuyahoga County Medical Examiner’s Office revealed no DNA evidence implicating him.

Jonathan Coleman is set for a second trial Feb. 5.

Danny Shelton was a fixture in the much-improved run defense but wasn’t happy with his season.

“It was not a good year for me,” he said Monday. “I had the most injuries I’ve ever had in my career this year. On top of the losing, it was really tough on me mentally and physically. So I definitely need to work on that, staying healthy and mentally healthy as well.”

Shelton missed one game with a calf injury and another with a rib injury, finishing with 34 tackles and a pass defensed. The ribs weren’t broken.

“That was the dumb part about it,” he said. “It was just a big bruised ribs, and I just wasn’t able to take on double teams with that.”

Safety Jabrill Peppers, the No. 25 pick, made his first interception in the finale against the Steelers, but it didn’t change his assessment of his rookie season.

“Not good. I don’t know what grade I would give myself right now, but it wouldn’t be a favorable one,” Pepper said. “I missed a lot of routine plays, tackles that need to be tackles. Didn’t really have enough impact plays. Didn’t do what I wanted to do in the return game.”

Receiver Terrelle Pryor had his best season with the Browns in 2016, and the team needs help at the position. He suggested on social media a reunion could be in store.

Running back Duke Johnson posted a picture on Instagram saying goodbye to 2017.

Johnson replied: Appreciate it, shi* lets do it..

Pryor led the Browns with 77 catches for 1,077 yards in 2016, then left to sign a one-year contract with Washington. He ended this season on injured reserve, finishing with 20 catches for 240 yards and a touchdown in nine games, including two starts.

Notes: Hue Jackson will consider adding coordinator and giving up calling plays, along with other changes to staff
Notes: Sam Darnold, Josh Rosen declare for NFL Draft, will be options for Browns with No. 1 pick