Notes: Sam Darnold, Josh Rosen declare for NFL Draft, will be options for Browns with No. 1 pick 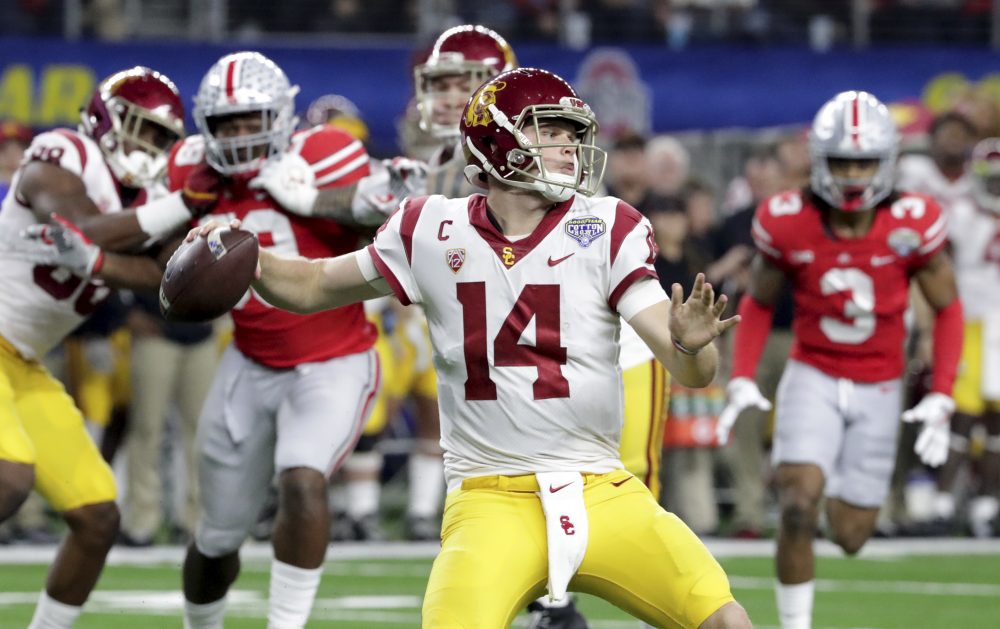 The Browns will have quarterback options with the No. 1 pick in April.

UCLA’s Josh Rosen and USC’s Sam Darnold declared for the NFL Draft within minutes of each other Wednesday night.

They, Wyoming’s Josh Allen and Oklahoma’s Baker Mayfield are considered the best passer prospects for the quarterback-needy Browns, who became the second team in NFL history to go 0-16.

They have the top pick for the second straight year and haven’t taken a quarterback before No. 22 since Tim Couch with the first pick of the 1999 draft as an expansion franchise.

Rosen, who had a year of eligibility left, played 11 games this season, completing 62.5 percent for 3,717 yards, 26 touchdowns and 10 interceptions.

ESPN reported Dec. 24 he would prefer to play for the New York Giants, who have the No. 2 pick, and would’ve been hesitant to enter the draft if he knew the Browns were going to take him. He’s taking the risk.

Darnold, 20, had two years of eligibility remaining. He told reporters before the Cotton Bowl loss to Ohio State he’d be honored to play for any NFL team.

Darnold played 14 games this season, completing 63.1 percent for 4,143 yards, 26 touchdowns and 13 interceptions. In the 24-7 loss to the Buckeyes, he was 26-for-45 for 356 yards with an interception returned for a touchdown and two lost fumbles.

“Any team that would give me that opportunity to be part of their organization, it would mean the world to me,” he said before the Cotton Bowl.

“We have to go out and do a better job with the players and get them to understand really what is here and what we are trying to accomplish and what we are trying to do,” Jackson said. “The only thing that is going to change it is results. In order to do that, is there some convincing we are going to have to do? Absolutely. I think we are in a war for talent on every level right now. That is OK.”

The Browns declined an offer from the NFL to coach in the Senior Bowl for the second straight year, passing on the chance to possibly work with Mayfield.

The Heisman Trophy winner accepted an invitation to participate, but rosters of the North and South teams haven’t been set.

The NFL teams with the worst records who aren’t making a coaching change are normally asked to coach at the all-star game in Mobile, Ala. But Jackson and new general manager John Dorsey decided to skip coaching as they focus on evaluations of the coaching staff — Jackson is looking to hire an offensive coordinator — and continuing to develop their working relationship.

The Browns will attend the practices.

The Broncos and Texans staffs will coach.

Jackson seemed reluctant but said Monday he’d accept the invitation if the Browns were asked to coach again.

Defensive end Emmanuel Ogbah, who had surgery to repair a broken foot and missed the last six games, said the recovery’s going well and he expects to be a participant in organized team activities in the spring.

“He’s one of the best ever to do it and I really love him as a person and as a player and I appreciate all he has done for me and if he’s back out there, I’m ready to go, let’s do it,” Bitonio said. “Even if he doesn’t practice every day.”

** Bitonio was named to the Profootballfocus All-Pro second team behind Carolina’s Andrew Norwell.