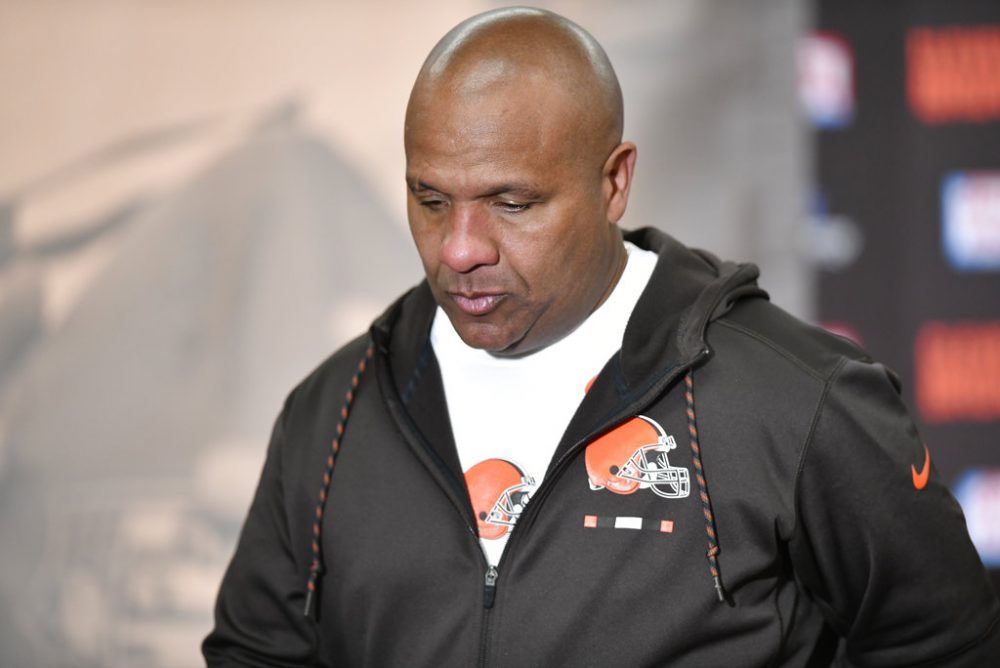 In the Browns’ first 13 years of existence, all under Paul Brown, they lost 29 games.

In the last two years, the Browns have lost 31 games.

From 1946 through 1958 the Browns won their league championship seven times, including five in a row, and played in the championship game 12 times in 13 years.

In the last two years the Browns winning percentage is .031.

Unfortunately for the Browns’ few remaining fans, they can’t even tell coach Hue Jackson to go jump in the lake, because he already has plans to do so.

That’s what passes for accountability on Jimmy and Dee Haslam’s Cleveland Browns, once the most storied franchise in the National Football League, now a team whose owner praises his coach’s leadership abilities after an 0-16 season.

It’s never a good sign when the coach of your favorite team has done more swimming than winning.

Ok, look. To a certain degree, this is survivalism on an unprecedented, breathtaking scale. When you can keep your job when so many around you are losing theirs, you’re either the Wizard of Odds, or you work for a boss who is a rebel without a clue.

“I don’t think Hue has lost his magic,” said his boss, winner by knockout for the straight line of the year.

So here’s what we’re being asked to digest, aside from that 0-16 fur ball nobody will be able to cough up if we continue hacking for the next 25 years:

As owner of the Browns, Jimmy Haslam has been impatient to a fault _ all the way up until the time when he absolutely, positively should be impatient, no questions asked. When everyone is begging for him to be.

Confronted with a situation that cries out for some good old-fashioned foot-tapping impatience, NOW Haslam turns into Mr. Roll With The Punches?

The decision by Haslam to reward Jackson for his 0-16 masterpiece with another year at the wheel is like sending a congratulations card to an avalanche.

Keep up the good work.

Even by their long, well-established history of turning easy decisions into hard ones, bringing back a coach who came as close as humanly possible to losing every single game for two years is a helmet scratcher.

I mean, seriously, is it asking too much of a coach to average one win per year?

At the risk of sounding harsh, I would recommend to all NFL teams that, starting immediately, all standard head coaching contracts include the following language: “This will probably never come up, because in the history of the league it’s only happened twice, but just so you know, if at any time during the length of this contract the team goes 0-16, that’s it. Sorry. No hard feelings, but you’re outta here. Adios. We mean, seriously, is it asking too much of a coach to average one win per year?”

Bringing back a coach who is averaging half a win per year for a third season to coach beside, not under _ nobody corporate flow charts like the Browns! _ a new general manager who didn’t hire him, creates too much potential friction, and another potential in-season blowup.

For example, if the Browns lose their first three or four games in a row next year, the coach gets fired, and it’s another wasted season.

If ever a season begged for a re-boot, it’s the season after an 0-16 debacle.

Hiring a new coach now, in the offseason, wipes the slate clean. It gets all the disparate parts of the organization on the same page, and gives everyone a fresh start going into next season.

Or, you can do it the Browns’ way.

There is no manual on how to handle the aftermath of an 0-16 season. There shouldn’t be, because no team should lose them all. We know this because almost no teams have.

This team has. Loss No.16 came last week in Pittsburgh, to a team that wasn’t even trying to win.

That he’s no Paul Brown is Ok.

That he’s no Rob Chudzinski is not.

Jim Ingraham: Zero and 16 should mean there’s zero chance Hue Jackson returns as Browns coach
Examining GM John Dorsey’s moves with the Chiefs and what that means for the Browns