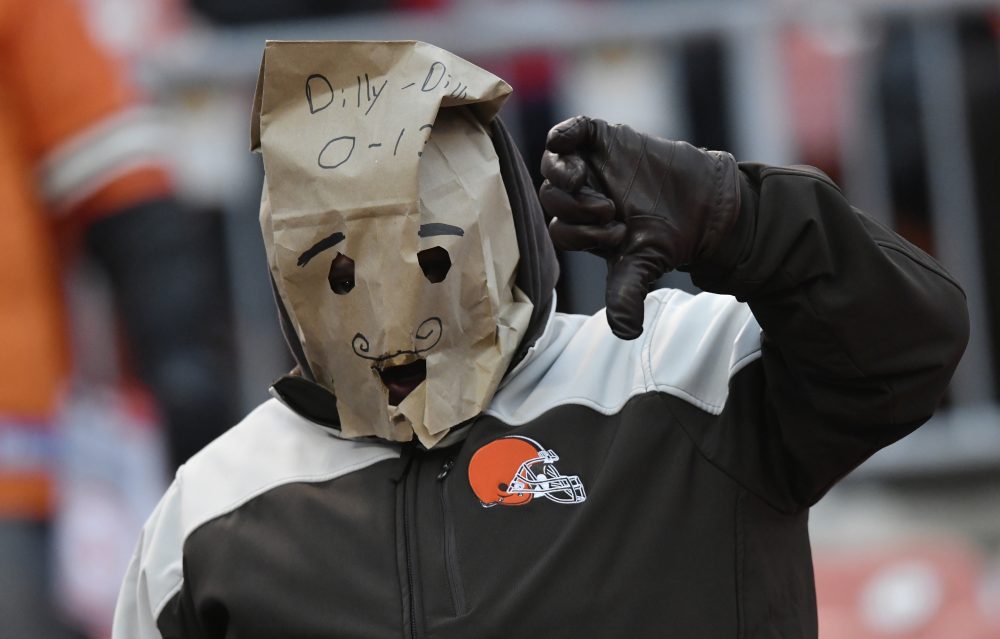 Arctic wind chills in the winter. Humidity of the rain forest in the summer. Potholes the size of garbage cans. Disappearing direct flights. A five-decade professional sports championship drought.

But the region’s collective skin remains thin at times.

Perceived slights from national broadcasters during games are met with outrage. Jokes from late-night talk-show hosts are taken personally.

Chris McNeil has felt a similar backlash from some as organizer of the “Perfect Season” parade set for Saturday at noon to shine a spotlight on the Browns’ 0-16 record. Fed-up fans will do a loop around FirstEnergy Stadium, also known as “The Factory of Sadness,” to symbolize the zero in the win column for 2017.

McNeil, whose Reflog_18 Twitter account has more than 68,000 followers, made it clear he wants to embarrass Browns owners Jimmy and Dee Haslam — not Cleveland.

“We should have more pride in our sports teams in Cleveland,” McNeil told The Chronicle in a phone interview. “It’s not tongue-in-cheek to say we’re the city of champions. The Cavaliers won a title, the Indians played in the World Series.

“We have a lot to be proud of. Now the Browns have to hold up their end of the deal.”

McNeil is sensitive to Northeast Ohioans’ sensitivity, knowing the city’s history as the butt of jokes. But he thinks they should get over it.

“This parade has gotten big enough, individual people in it have their own perspective on what the parade means,” he said. “My personal message is we should move past this idea of Cleveland being embarrassed.

“It’s Cleveland vs. the world. We just want the Browns to be better.”

The idea for the parade originated during the 2016 season as sarcasm on social media, juxtaposing the Browns’ situation to that of the Cavaliers, whose championship parade was reportedly attended by more than a million people. The Browns avoided the parade with a Christmas Eve win and finished a franchise-worst 1-15.

They somehow went backward this year, so the parade will march forward in a sign of protest.

The dissatisfaction isn’t only with the record. McNeil mentioned a lost connection between ownership and fans, and changes to the uniforms and gameday experience he called “too corporate” and “so sanitary.”

He hopes the parade leads to better interaction between organization and fan base but also has a loftier goal.

“I know the Browns are embarrassed by this parade. I know the NFL is, too,” he said. “Maybe it adds to the laundry list of things that eventually cause a change in ownership.”

Jimmy Haslam said after the season finale in Pittsburgh on Sunday he has no intention of selling and stressed his commitment to the community and team.

“I plan on owning the Browns for a long time and turning this franchise around,” he said.

But it’s not farfetched to believe the negative attention of the parade — on top of only the second 0-16 season in NFL history — could cause him to rethink some practices. McNeil has done a series of national and international interviews in advance of the parade.

According to the Facebook page dedicated to the parade, 6,200 people have committed to attend and 20,000 have shown interest. McNeil says he’s heard from people flying in from California and other locales but isn’t sure what to expect for attendance, especially due to the forecast of a high temperature of 8 degrees and the wind chill expected to be minus-14.

The parade route is around the stadium and will feature floats, including one from North Ridgeville’s Tony Timoteo, who’s taking his “graveyard” of Browns starting quarterbacks on the road.

Excedrin, the headache medicine, signed on as a sponsor in December before the Browns blew a 14-point fourth-quarter lead and lost in overtime to the Packers. FarmersOnly.com, a dating site, joined this week.

McNeil has pledged any money over the parade expenses to the Greater Cleveland Food Bank and wants attendees to bring canned food and non-perishable items Saturday. He estimated the parade costs at $8,000 and said there’s $12,500 in the fund.

McNeil acknowledges some negative feedback but said the majority has been supportive. Even Browns players came to grips with it.

“I feel for the fans. They’ve had to go through some pretty bad seasons,” cornerback Jason McCourty said. “I appreciate the fans. They show up to games Sunday with us winning not much at all. For us to finish 0-16, they have the power to do whatever they like.”

After more than a year of discussion, the moment has nearly arrived.

“It gives us a voice and is something unique,” McNeil said.

Josh Gordon believes team can use 0-16 as springboard to success, wants to be a leader in that pursuit
All eyes on Josh Allen, Baker Mayfield at Senior Bowl; Mayfield says he’s not Johnny Manziel