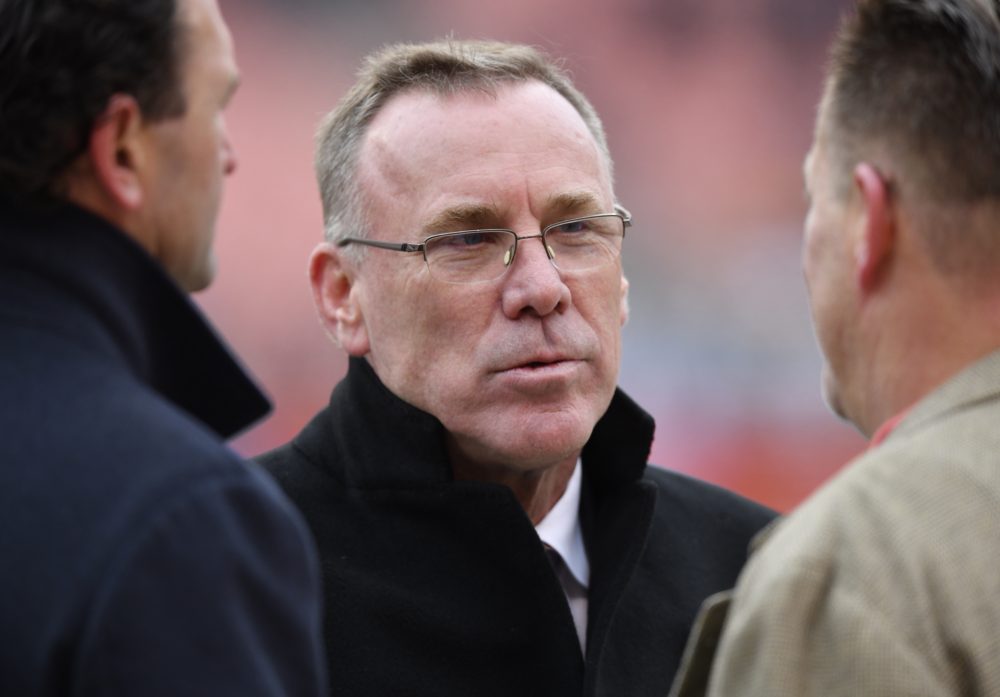 General manager John Dorsey has been here before.

Well, not exactly here. No team in NFL history had gone 1-31 in consecutive seasons.

But he’s been in the neighborhood.

When he was hired as a first-time general manager by the Chiefs in 2013, he inherited a team that went 2-14 under GM Scott Pioli and coach Romeo Crennel in 2012 to “earn” the No. 1 pick in the draft. They had the NFL’s lowest-scoring offense at 13.2 points a game, and the quarterbacks were Matt Cassel and Brady Quinn.


Dorsey is a month into his job with the Browns and could be forgiven if he’s had second thoughts. He watched two home losses — an overtime heartbreaker to the Packers and a deflating, convincing one to the Ravens — a Christmas Eve disaster in Chicago and a self-destructive defeat at Pittsburgh in the finale to reach 0-16. He was ripped for saying predecessor Sashi Brown didn’t get “real” players. He had to watch the roster practice and play in person.

Dorsey isn’t going anywhere and is full speed ahead as he learns the players, coaches and personnel department. His to-do list will be a mile long when it’s finalized and will start with transforming the roster.

Dorsey had five drafts and almost five full offseasons before being fired by the Chiefs in June. With the help of coach Andy Reid, Dorsey immediately turned the Chiefs into a playoff team with an 11-5 record in 2013.

They went 43-21 in his four seasons with three playoff trips, and returned to the postseason this season, losing Saturday to the Titans.

Kansas City’s depth chart has changed because of injuries, but Dorsey acquired just about every starter, including a dozen in the draft. He used trades and free agency to supplement the picks.

A look at how he turned around the Chiefs should be useful as he tries to do the same with the Browns, who have a much longer history of losing and dysfunction. The Chiefs had been in the playoffs in 2010; the Browns haven’t been since 2002 and don’t have a winning season since 2007.

Dorsey appreciates the importance of quarterback, unlike Brown before him. The first signature move with the Chiefs was trading a second-round pick in 2013 (No. 34) and a conditional pick in 2014 (it became a second-rounder) to San Francisco for Alex Smith, the former No. 1 overall pick who gave the Chiefs instant credibility.

Dorsey’s top priority with the Browns will be upgrading at quarterback. DeShone Kizer is a better young option than Cassel or Quinn, but he made bad decisions, missed throws and misread coverages throughout the season.

The Browns need to add quarterbacks — plural — to fix an offense that was last in the league with 14.6 points a game. Dorsey should add a veteran — Smith is expected to be available in a trade — and use the No. 1 pick on USC’s Sam Darnold, UCLA’s Josh Rosen or Wyoming’s Josh Allen, assuming he believes any of them will be a franchise quarterback.

After adding Smith, Dorsey spent the No. 1 pick in 2013 on left tackle Eric Fisher. He’s never been to a Pro Bowl but has started 74 games.

The best pick of Dorsey’s first draft was third-round tight end Travis Kelce, who was named a second-team All-Pro on Friday and was a first-teamer last year. He’s a three-time Pro Bowler.

Another important note about the transition under Dorsey is he kept some of the key players he inherited. Safety Eric Berry, linebackers Derrick Johnson and Justin Houston and punter Dustin Colquitt remain mainstays five years later.

Peters has made two Pro Bowls and Hill and Hunt one apiece, with Hunt a candidate to be Offensive Rookie of the Year after leading the league with 1,327 rushing yards.

The starters came from throughout the draft. Ford, Peters and Jones were first-rounders, Nelson and Hunt third-rounders, Robison a fourth-rounder, Hill a fifth-rounder and Fulton and Duvernay-Tardif sixth-rounders.

Dorsey showed he’s not averse to character risk. Kelce was suspended for a season at the University of Cincinnati — he said he failed a marijuana test — and Hill had pleaded guilty to domestic violence by strangulation of his pregnant girlfriend and was sentenced to three years probation.

Dorsey was also active outside of the draft, using free agency, trades and waivers to fill out the roster.

Of course, Dorsey didn’t hit on every pick — cornerback Keivarae Russell, a third-rounder in 2016, was waived — but his success rate was impressive.

Browns fans can learn — and expect — a lot following Dorsey’s tenure with the Chiefs. It’s clear he knows how to indentify talent and acquire it.

But fixing the Browns won’t be as easy, or likely as quick. He took over a historically bad Browns team with holes across the roster, which he further denigrated by saying his predecessor didn’t get “real” players.

The work for Dorsey begins with deciding which ones are legitimate and worth keeping. He immediately cut receiver Kenny Britt, said he wanted to draft running back Duke Johnson, left guard Joel Bitonio, defensive tackle Danny Shelton, outside linebacker Christian Kirksey and defensive end Myles Garrett while he was in Kansas City and acknowledged receiver Josh Gordon’s immense talent.

Dorsey has the benefit of 12 draft picks in 2018, including Nos. 1, 4, 33 and 35, and an expected $100 million in salary cap space. That will allow for a significant transformation of the roster, with the intention of a swift turnaround in the record.

Smith is the early favorite to serve as the bridge quarterback until the No. 1 pick is ready. Buffalo’s Tyrod Taylor, Cincinnati’s AJ McCarron and three Vikings — Case Keenum, Sam Bradford and Teddy Bridgewater — are other options.

Step 2 in free agency will be adding experience at other key positions, such as receiver (Terrelle Pryor could return), pass rusher, safety and cornerback.

When it comes to the draft, Dorsey has shown a willingness to adapt to the situation. He traded out of the first round in 2016 — sliding into the second round to add a pair of middle-round picks — then moved up from No. 27 to No. 10 last year to take quarterback Patrick Mahomes.

Besides quarterback, he could need to draft a running back to replace Crowell and a left tackle if Joe Thomas retires. Receiver and cornerback may also be pressing needs, depending on the additions in free agency.

Dorsey has plenty on his plate, including getting on the same page with coach Hue Jackson and learning what the coaching staff wants from each position.

The work has begun. Browns fans hope the results follow, as they did with the Chiefs.

Commentary: Hue Jackson doesn’t deserve to keep his job next season
Help us Bill Belichick, you’re our only hope