Help us Bill Belichick, you’re our only hope 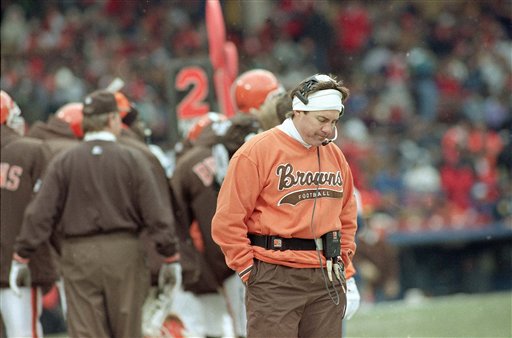 Greetings from Cleveland! Did you hear about the parade?

Gee, that’s odd. Being one of those happy-go-lucky, lampshade-on-head kind of guys, you always struck me as a sucker for a good parade. Guess not, though, huh? . . . I said “huh?”

Yeah, well anyway, I thought you’d like to know about Saturday’s “parade.” It wasn’t like any of those five noisy, crowded Super Bowl championship parades you’re used to in Boston.

This was more of a hilarious, yet contemplative, esoteric parade. Actually, just a temporary gathering. A procession. You know, like one of those funeral processions they do so well in New Orleans? One of those.

Yeah, the fans officially put another Browns season down. Put that puppy to bed. It was a memorable season, for sure. Sort of like your 2007 season with the Patriots, where you went 18-0 before losing to the Giants in the Super Bowl.

That was the year you guys almost had a perfect season. Almost won ’em all.

The Browns this year DID have a perfect season. They lost ’em all. Yep. Every single one of ’em. A big fat 0-16. Not a single win. Perfection!

Anyway, the reason I’m writing is to ask, with all due respect — are you bored yet? You look bored at all those press conferences and things. You know, how you just stare at people when they ask you a question?

Yeah, well anyway, having won all those Super Bowls with the Patriots, the word on the street, according to that ESPN story, is that your dynasty may be starting to crumble. That you, the old geezer quarterback — name escapes me — and the owner of the team are getting on each other’s nerves and — again, I’m paraphrasing here — the whole thing’s about to go down the toilet.

It sure looks that way, because you guys only went 13-3 this season. What the heck is going on up there anyway?

You, the over-the-hill quarterback and the owner immediately released a joint statement responding to the ESPN story by saying everything with the team is hunky dory.

But you and I both know that in situations like this, while everyone may say everything is hunky, it most certainly is not also dory.

You can’t have it both ways.

Listen, Willie — do you mind if I call you Willie? — you don’t need those Patriots headaches anymore. Before you know it that quarterback is going to be 50. There’s nothing left for you to accomplish in New England.

Seriously. What’s left for you to do up there? Win a SIXTH Super Bowl?

You’ve made your point.

It’s time for you to come back to Cleveland and finish the job Art Modell prevented you from finishing the first time.

It’s time for Bill Belichick to come back as coach of the Browns and win the Super Bowl.

It would be like LeBron James coming home and winning a championship for the Cavs — only bigger. Way bigger. It would be the greatest sports story ever told.

Here’s how it works: you coach the Patriots to (yawn!) another Super Bowl win this year, then immediately announce you’re retiring. Then, two days later, you sign with the Browns — but with no guarantees.

You’d still have to beat out Hue Jackson to be the head coach.

Then once you do that — it’s clear sailing! All the way to hoisting the Lombardi Trophy, which henceforth would be renamed the Belichick Trophy.

So what do you say? You in? You’ll love it here. Cleveland is much different than the last time you coached here. The Browns have a new stadium, they have nine uniform combinations, a new owner — you’ll love this guy — a ton of draft picks, and nowhere to go but up. Way up.

Come here and win a Super Bowl and you’ll be bigger than LeBron. Your legacy will make Lombardi’s look like a clown show.

You’ll go down as the greatest leader in the history of followers.

And as a guy who knows how to throw a REAL parade.

So think about it, and get back to us.

Your pals in Cleveland

Examining GM John Dorsey’s moves with the Chiefs and what that means for the Browns
Commentary: Hue’s a leader, but his return is hard to justify