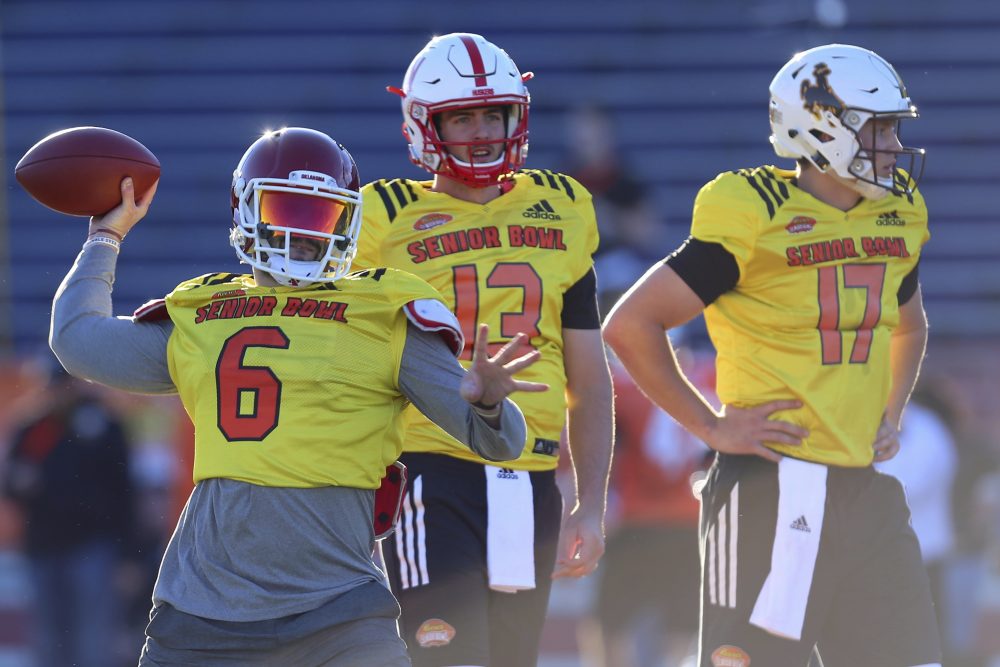 Q: Hey, Scott. There’s a lot of love for Baker Mayfield coming out of the Senior Bowl. GM John Dorsey specifically has had good things to say. Now, momentum’s building that Mayfield could go No. 1. How do we explain the love for Mayfield with Dorsey and Hue Jackson’s tight bond and Hue’s stance that NFL QBs be taller than 6-2?

A: Mayfield may have been the best quarterback in Mobile, Ala., last week — Josh Allen supporters would argue — but that doesn’t make him the best quarterback available in the draft. I genuinely think Dorsey likes Mayfield as a player, and we know he’s scouted him intently. But that’s not close to the same thing as saying he would take him in the top five of the draft.

Questions about Mayfield’s size and character/personality are legitimate, and I believe will keep him from being drafted by the Browns. The No. 1 pick is not the time to take a flyer at the game’s most important position, especially with other legitimate options.

Q:
I’m curious to see how much trust the new management has with receiver Josh Gordon, considering how much he has let down the organization. With the way he played at the end of the 2017 season he would have some trade value. Do you think we could see a trade for Terrelle Pryor and a mid- to late-round pick? Or the possibility of getting a second-round pick?

A: The approach must be wait-and-see with Gordon after everything he’s been through and put the organization through. I know new general manager John Dorsey appreciates Gordon’s rare talent, but that doesn’t guarantee a future.

I believe Gordon has limited trade value, simply because he’s another failed drug test from another indefinite suspension. The best the Browns could hope for would be a conditional draft pick — based on future availability and performance — that would top out in the second round. If he were to be that reliable and productive, it makes more sense to keep him.

As for Pryor, he’s a free agent, so the Browns don’t have to give up anything to bring him back.

Q: If DeShone Kizer was in this year’s draft, he would be grouped in as one of the best QBs coming out. Since we already have this guy, why waste another pick on a QB that needs to be developed?

A: I don’t agree that Kizer would be considered with the top group this year. Some draft analysts rate this class higher than last year’s, in which Kizer was the fourth quarterback selected.

I do agree that if the Browns draft a quarterback with the No. 1 pick, they must be convinced he’s markedly better than Kizer. This is particularly a tough sell when it comes to Wyoming’s Josh Allen, who has the same accuracy issue that plagued Kizer as a rookie. USC’s Sam Darnold’s turnover problem is also a concern, but many believe he’s more accurate and talented than Kizer.

Q: Hi, Scott, what’s the status of Howard Wilson, Rod Johnson, Zach Banner and some of the other rookies who missed last year? Are they set to have complete offseason participation, and do you see any of them making the 53-man roster and/or an impact?

A: Johnson, an offensive tackle, was around the team all year and seemed to be close to healthy by the end of the season. He struggled so much against Myles Garrett in training camp, I can’t see him as the heir apparent to left tackle Joe Thomas. But that doesn’t mean he doesn’t have a future in the league as a backup.

I’m less optimistic regarding Wilson. The broken patellar is a serious injury and the team didn’t refer to him at all throughout the season. The Browns have huge needs at cornerback, so Wilson, if healthy, would be given the chance to play.

As for Banner, he was healthy and filled in at right tackle for an injured Shon Coleman against the Lions. Banner is a mountain of a man at 6-foot-8 and 360 pounds and full of personality. He looks like he belongs in the NFL, is an intriguing prospect and probably better suited at right tackle.

If Thomas retires, I expect the Browns to draft his replacement. But an internal option would be shifting Coleman to left tackle, where he feels more comfortable, and trying Banner at right tackle.

Q: Scott, will the addition of Todd Haley as offensive coordinator help in the area of the Browns being more focused? Seems like there were too many penalties that could have been avoided had players paid attention more.

A: That’s the hope. Haley has a forceful personality and will try to impose his will on the offense. That can only help with discipline.

But I don’t attribute all of the issues you mentioned to Hue Jackson as coordinator, because he was given a roster with too many young players, especially at quarterback. And when a player such as receiver Corey Coleman continues to line up incorrectly, the blame lies with the player.

A: The Ben Roethlisberger-Josh Allen comparisons are natural given their physical stature and strong arms. After watching Haley for years with the Steelers, I believe he would prefer a quarterback who can throw the ball downfield. Haley had a lot of success mixing quick hitches and bubble screens with deep throws. Allen, Rosen and Darnold appear to have the height, weight and arm Haley would prefer.

We haven’t gotten a chance to talk to Haley yet. When we do, hopefully he’ll provide greater insight.

Mailbag: Why the slow OC search? OK for Myles Garrett to play hoops? Trading down in the draft?
Mailbag: Joe Thomas’ future? QB worthy of No. 1? Best receivers and safeties in free agency?