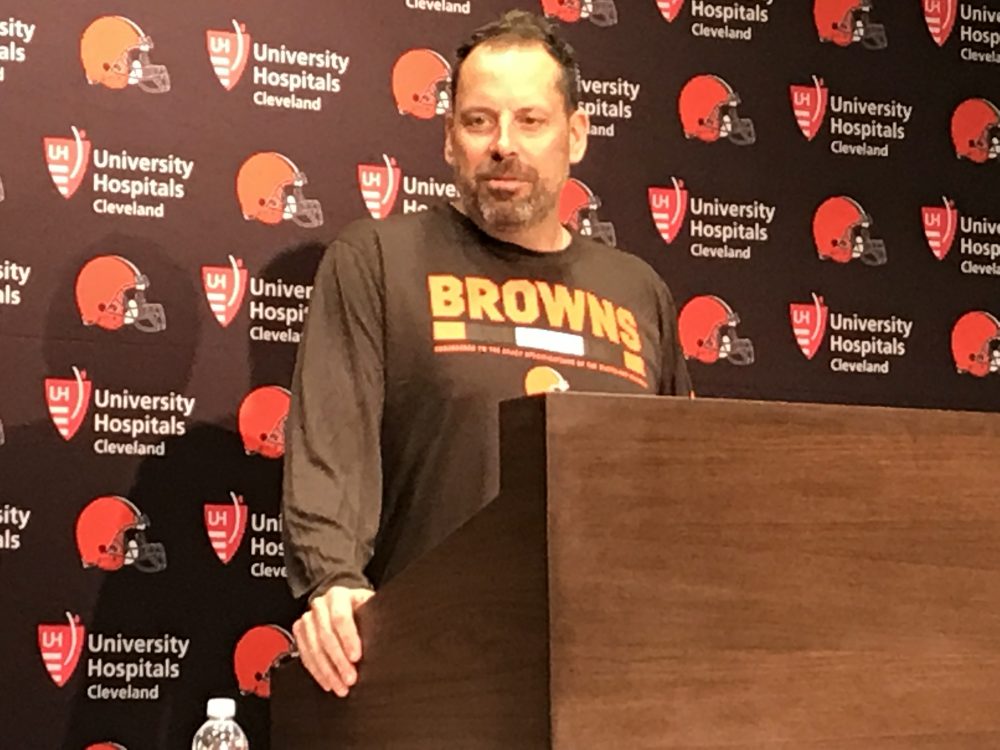 BEREA — Todd Haley grew up hating the Browns. His dad, Dick, was director of player personnel for the Pittsburgh Steelers from 1971-91.

Haley spent the last six years beating up on the Browns. The Steelers went 10-2 in the rivalry during his time as their offensive coordinator.

Haley has crossed over from the dark side. The Steelers didn’t renew his contract following the season, and he quickly agreed to become coordinator for the Browns, taking over the play-calling duties from coach Hue Jackson.

“We had Steelers stuff stocked up for six years and people are amazed that when you go somewhere else, you put it in a box and see who wants it,” Haley said Wednesday during his introductory news conference after being hired last month. “I’m looking forward. This is a really exciting challenge and I think it would be really great to be part of helping turn this great organization around with a rich, rich history.


“Having grown up in Pittsburgh, I hated the Browns, but I liked a bunch of players a lot. (Former coach) Sam Rutigliano befriended me years ago, and I get excited every time I get a little note from him because on the front it’s him and Brian Sipe. Obviously Jim Brown, I’ve heard stories from my dad about him trying to tackle him. It’s a great crowd and all I can visualize is what it’ll be like when we’re winning games.”

Browns fans have a hard time remembering what that’s like. The Browns are coming off the second 0-16 season in NFL history and are 1-31 in two years under Jackson. They haven’t had a winning season since 2007, or been to the playoffs since 2002.

Haley, 50, acknowledged the drastic change in his circumstances but insisted he’s not fazed by it. He said he had other options but chose the Browns, citing owners Jimmy and Dee Haslam, general manager John Dorsey and Jackson as reasons.

“This really appealed to me. This is a big challenge, but I’m really excited about it,” he said. “There’s pieces in place to be successful.

“You know I went out to Arizona as a coordinator and Arizona hadn’t had much success and a lot of people thought I was crazy for leaving Dallas when I did, but, man, when you’re part of that turning around and having success and playing in big games and having success in big games, there is nothing like it. That’s what appealed to me, the challenge and people I was going to be working alongside.”

Haley went to the Super Bowl with the Cardinals as coordinator, earning a head coaching job with the Chiefs, where he went 19-26 from 2009-11. When he became available after the Steelers lost in the playoffs, Jackson went after him and gave up calling plays for the first time as a head coach.

“He wasn’t hesitant at all with me,” Haley said. “We had great conversations right out of the gate. That’s another guy that’s been around a long time to talk to and to bounce things, ideas or thoughts, off of and get information.”

Haley and Jackson will blend their philosophies and playbooks while switching to Haley’s terminology, which is a significant change. He said he’s not a “system” guy.

“What I believe in is playing to every player’s strength, putting players in position to succeed by playing to their skill set,” Haley said. “Hue is a very strong offensive mind. I have a great amount of respect for him. So he’ll be an awesome source of ideas and to lean on.”

The Steelers ranked in the top 10 in yardage and scoring each of the last four seasons, as Haley mixed the run and pass, and quick passes with deep shots. Pittsburgh ranked second, third, seventh and third in yardage from 2014-17, and seventh, fourth, 10th and eighth in scoring. The Steelers were second, third, fifth and third in passing, while the run game ranked 16th, 16th, 14th and 20th.

Haley stressed he adapts to the talent he’s given. The Steelers were a pass-first team with quarterback Ben Roethlisberger and receiver Antonio Brown, but his 2010 Chiefs led the league in rushing yards and attempts.

Haley left behind Roethlisberger, Brown and running back Le’Veon Bell, another perennial Pro Bowler. He walks into a situation with little settled at the skill positions, particularly at quarterback.

“It’s going to be the same challenge you always face. It’s going to be laying a foundation for your players to learn, and being able to have some success developing players,” he said. “You have to develop players in this league. When I got there Antonio Brown wasn’t the Antonio Brown everybody knows. There was great development there, and in this league if you don’t develop players, you’re probably going to fail.”

Haley said it was too early to assess the roster he inherited. The Browns ranked last in the NFL with 14.6 points a game and 24th with 308.9 yards a game.

Before turning his complete attention to Cleveland, he glanced back at his six years in Pittsburgh.

“I was brought in to do a job and I feel like I did that job or more, I did a lot of really good things and developed arguably the best receiver in the league and developed arguably the best back in the league and one of the top quarterbacks in the league consistently, did a lot of really good things and scored a lot of points,” he said. “It’s a place that meant a lot to me from my history, obviously, my father played there in the ’60s, worked with them for a long time, so to be able to go to Pittsburgh and have six really good years was really something that I enjoyed. That being said, I’m looking forward not back.

“It will be a lot of work but it will pay off a bunch and there is no feeling like it.”