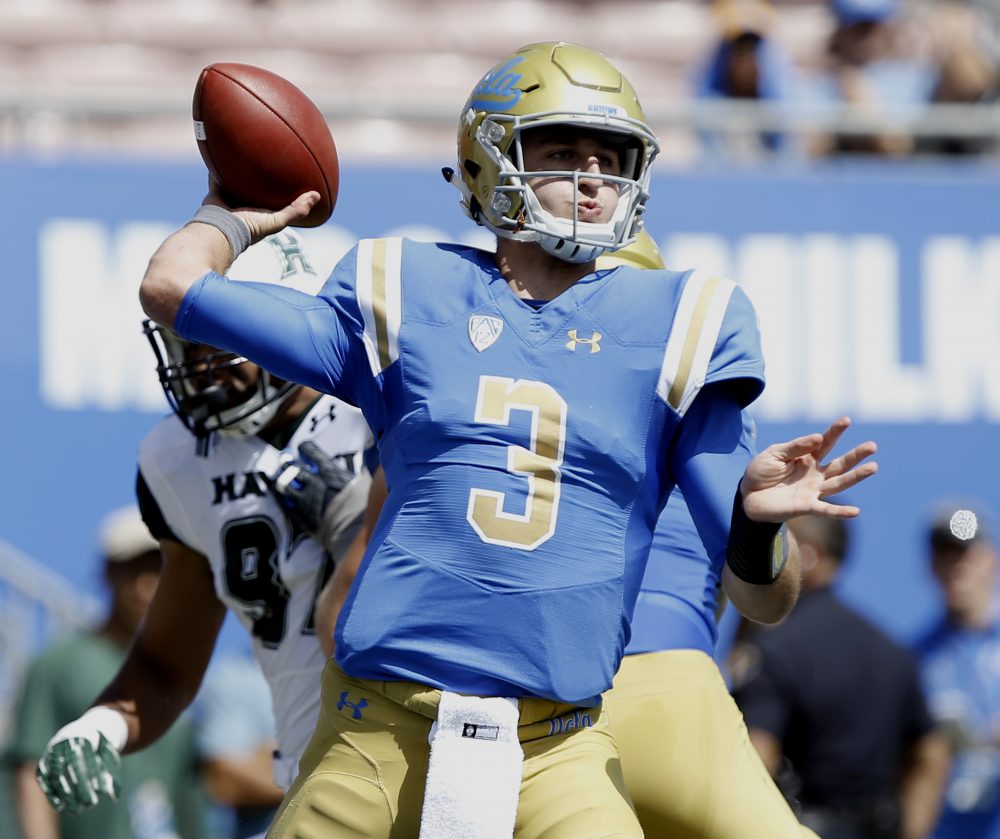 INDIANAPOLIS — Coach Hue Jackson had yet to sit down with UCLA quarterback Josh Rosen, a contender to be the Browns’ draft pick at No. 1, but he already liked what he had heard.

Rosen refuted a report he was hesitant to be drafted by the Browns, telling NFL Network’s Michael Silver last week there’s “absolutely no foundation in reality” in the report.

“We get to draft them and we’re going to have those conversations with these young men about things that are said. There’s no question about that,” Jackson said Wednesday at the start of the NFL scouting combine. “But it does feel good to know that that was not the report that came from him. That was not something that he said and he corrected that.”

Jackson was looking forward to his interviews with the top quarterback prospects, all of whom have significant questions that need to be answered. For Rosen, the biggest issues are his durability — he had shoulder surgery in 2016 and two concussions in 2017 — and a personality that bothers some and has called into question his passion for the game.

“We want to talk to him about everything, all the things you’ve talked about and the things that we have questions about,” Jackson said, adding he’s been coaching long enough that he can tell in the 15-minute combine interview if a player genuinely loves football. “I think you know. The guys who are passionate about playing football and wanting to be one of the best in this league, it shows.”

Jackson said it’s too early in the process to rank Rosen, USC’s Sam Darnold, Wyoming’s Josh Allen and Oklahoma’s Baker Mayfield in the race to be selected No. 1.

“There’s quite a few quarterbacks that we feel are going to be really good players in the National Football League,” he said.

The expectation is the Browns use the No. 1 pick on a quarterback after taking defensive end Myles Garrett with the top pick last year. Jackson said nothing to change the perception.

“We truly believe that Myles Garrett is a special player and he’s going to be a great player for the organization, so if there’s another player like that and we think he’s better than the quarterback position, then we’ll have to consider that,” Jackson said. “But I think there are some fine quarterbacks in this year’s draft.”

With new general manager John Dorsey running the football operations, Jackson said picking a quarterback will be a “collaborative effort.” He said the personnel department, coordinator Todd Haley and quarterbacks coach Ken Zampese will have input, with the final decision left to Dorsey and Jackson.

“I’m sure me and John will sit down and put our heads together on what’s best for our organization,” he said.

Darnold is considered by many the favorite to be the top pick. He won’t throw during the quarterback workouts Saturday.

“We wish he would throw, would like to see him throw,” Jackson said. “But at the same time, there’s going to be other time to have an opportunity to watch him work out and do those things. But do I wish he was throwing here this weekend? Yes, I do, to watch him compete with the other guys. But at the same time, that’s not going to hinder us making a decision about what kind of player he is for our football team.”

Darnold threw 22 interceptions and fumbled 21 times, losing 14, in two years as a starter. His right hand will be measured this week and Jackson will be paying attention.

“There’s all kind of different variables that a guy’s had to deal with, players leaving, systems, all kind of things,” Jackson said. “We’ll dig into that and understand why those things happened, and we’ll give the player an opportunity to explain to us why they happened.”

Mayfield, the Heisman Trophy winner, is one of the most interesting guys in the draft. At 6-foot-0 3/8, he falls almost 2 inches below Jackson’s threshold.

“There’s always outliers, right?” he said. “There’s still guys in the league that are playing that are below 6-2 that have played really well. So there’s always going to be that one young player that’s going to be special, and this young man may be that, but we don’t know that yet, so we’ll find out as we go.”

Jackson said he didn’t spend time with Mayfield at the Senior Bowl and is looking forward to the interview and trying to understand his polarizing personality.

“We’re going to find out about why it was 56.2 percent,” Jackson said. “That’s why we’re here at the combine, and that’s what we’ll be doing over the next month or two is to find out why those things are happening.