NFL Scouting Combine, Day 3: Baker Mayfield on the Browns — ‘If anybody’s going to turn that franchise around it would be me’ 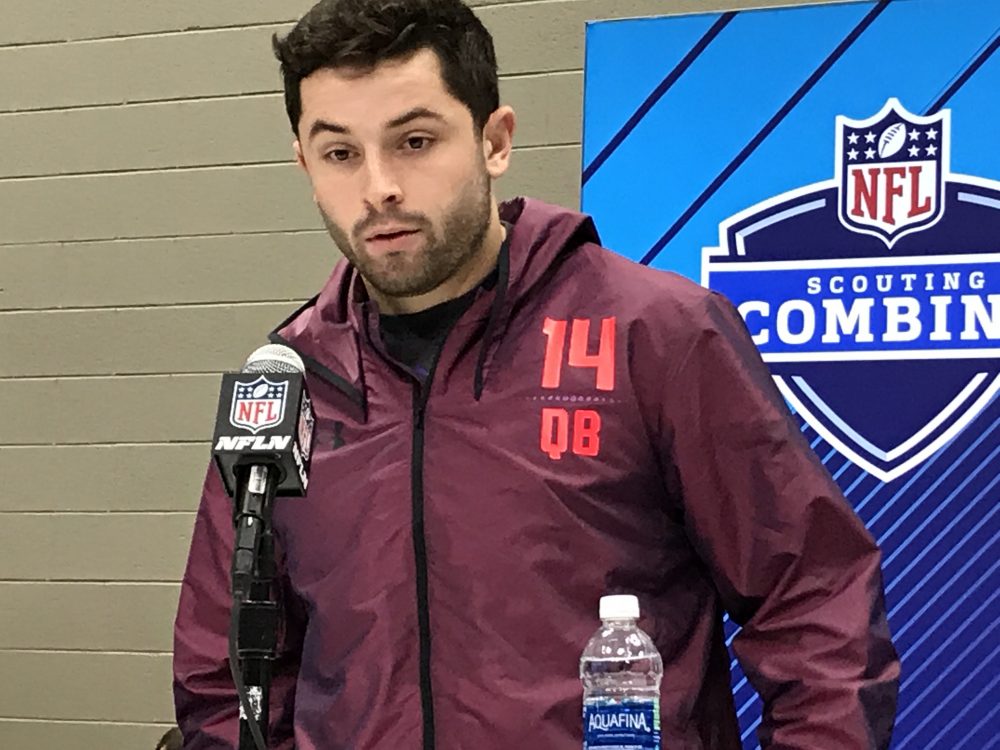 “I think if anybody’s going to turn that franchise around it would be me,’’ Mayfield said Friday at the scouting combine. “They’re close. They’re very close. They have the right pieces. I think they just need one guy, a quarterback to make that difference.”

UCLA quarterback Josh Rosen followed 15 minutes later. While he called himself the best player in the draft — as Mayfield did — the contrast was obvious. His answers were longer and thoughtful with room for nuance.

“I think you just have to go in there and play the game you know and play to the best of your capabilities,” Rosen said. “I don’t really know anything about Cleveland, I’ve never been there, haven’t really talked to their coaching staff yet, have a meeting with them tonight, so it’s impossible to formulate opinions when you haven’t really done any research on the actual place. So I’m probably going to visit there, hang out with them, then whoever picks me, I’ll be excited to play for whoever wants to.”

Here are some more thoughts from two of the candidates to be drafted by the Browns with the No. 1 pick on April 26. (USC’s Sam Darnold and Wyoming’s Josh Allen were scheduled to talk later.)

** Mayfield on why he’s the right guy.

“Accuracy. I can make any throw,” he said. “Winning is most important, but the way I’ve been able to get my guys around me to play, not just the offensive players around, the 10 guys, but the defensive players, special teams. The energy I bring, the passion I bring, it’s infectious. You can ask anybody on that Oklahoma staff. That’s what I bring to the table.”

** Mayfield won’t shy away from the spotlight.

“Under pressure is something I thrive on,” he said. “First things first, get a win. It doesn’t matter where you are. The most important thing is winning.”

“You see guys like Tyrod Taylor, Drew Brees, it doesn’t matter,” he said. “I’ve got three years of tape you can watch.”

** Rosen was asked whether joining the winless Browns would be a daunting task.

** Rosen on his best attribute.

“I make very quick decisions, very quick and decisive decisions,” he said. “I always say that if you can get to three, four reads into your progression you give yourself more opportunities to get the ball down the field. So that’s what I think my best attribute is. I can sit in the pocket and really pick defenses apart.”

** Some have questioned whether Rosen loves football. He said he “kind of” thinks he needs to convince teams he does.

“So it’s cool when you can throw a touchdown at the Rose Bowl and turn to the sideline and see 120 of your best friends all jump in joy. You can see administration and fans that you know personally because you’re in class with them. You can see your coaches, you’re playing for them. I think that’s what’s uniquely cool about football is that it’s such a complex sport and winning a game, winning a championship of any sort, so many things have to go right in order to win that, that’s why I think football is so cool. And that’s why I love the sport is because it’s really the ultimate team game.”

** Does it bother him people question his love for the game?

“No. I think that’s why I’m excited to be here,” he said. “I think if teams still questioned my love for the game after this week and after they actually really got to know me, then it might bother me a little bit more, but I think that coaches can really see what I care about.”