Commentary: There’s no quick fix for GM John Dorsey, but he’s off to strong start in cleaning up mess left by Sashi Brown 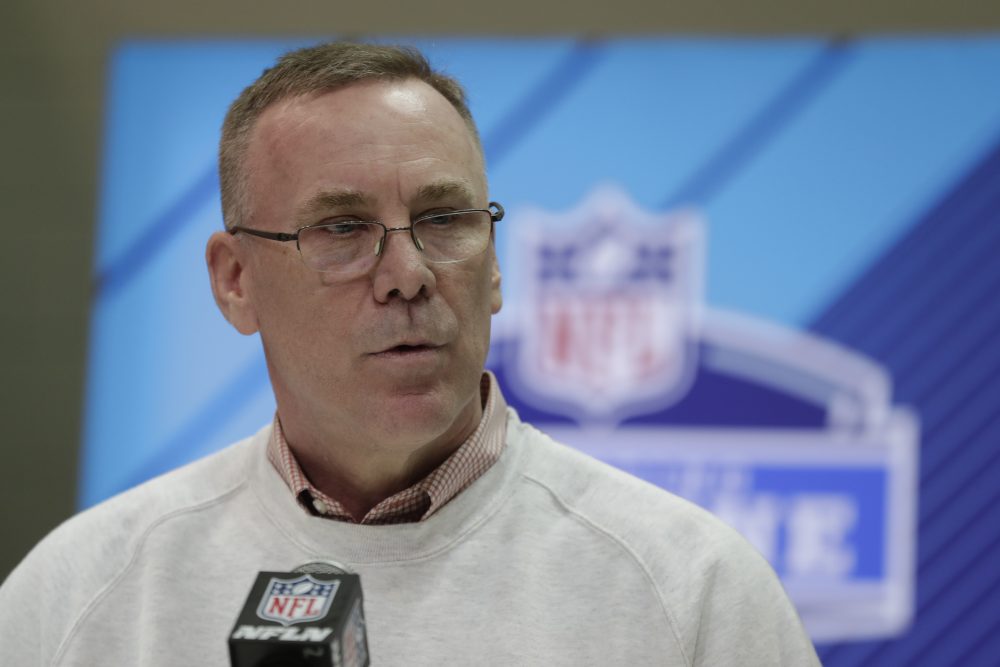 Never before in this century has there existed a professional sports team less applicable to the admonishment “If it ain’t broke, don’t fix it.”

With your Cleveland Browns, everything is broke. It all needs fixing. Oh-and-16 and 1-31 are not the footprints left by a team heading in the right direction.

Hence, “It’s broke. Fix it,” were the marching orders for new sheriff John Dorsey, who has ridden into town and wasted no time in commencing the fixing.

Before he’d even climbed off his horse and hung up his hat, Dorsey released overpriced ball-dropper Kenny Britt, whose acquisition in many ways symbolized everything that was broken and wrong about the Browns.


But the Britt eviction was just the appetizer.

On Friday Dorsey wheeled out the main course: three trades in which he used three draft picks (none in the top two rounds), plus interception machine DeShone Kizer, to bring back three players who will be immediate starters for the Browns, at positions of severe need.

Then, just to make sure we were paying attention, on Saturday, in his fourth trade in less than 24 hours, Dorsey traded the team’s latest failed former first-round pick, Danny Shelton, to New England for a third-round pick next year.

No need to call the maid. The housecleaning is well underway.

Give a bad roster to a new GM unchained, and this is what you get. Anyone got any problem with that? Didn’t think so.

Dorsey is moving a needle that needed moving, for numerous reasons, starting with this:

He has quickly let it be known that real football people are running the team again.

In a related note, everyone needs to lighten up on the notion that Sashi Brown left the Browns (and Dorsey) in a great place, with all the draft picks and cap space he acquired during his two-year gutting of what was already a destitute roster.

Brown did nothing of the sort. He left the Browns in a terrible place: without a franchise quarterback, without impact skill position players, or many impact position players on either side of the ball.

He left Dorsey in the position of having to use all those draft picks and all that cap space to try to fill holes that were created, or never filled, during Brown’s brief tenure as GM.

The abysmal level of decision-making that led to Dorsey’s hiring is underscored by the dramatic, and rapid, moves he’s already made. As a way to further emphasize the train wrecktitude of the roster left him, Dorsey was probably not unhappy that his three trades Friday happened to come together seemingly within minutes of one another.

Or maybe that wasn’t happenstance at all. Maybe they were already completed and ready to go, and Dorsey was able to orchestrate the announcement of them, for maximum impact, virtually simultaneously.

So this is a good start. A lot needs to be fixed on the worst team in professional sports, and Dorsey fixed a lot of stuff Friday. However, the best thing he has done so far is to aggressively redirect the fan base focus from the debacle of the last two years to the promise of the next two.

To the rebooting of a failed reboot.

Unlike Brown, who twice went eyeball-to-eyeball with the opportunity to acquire a franchise quarterback — Carson Wentz, Deshaun Watson — only to blink and trade out of the spots he could have used to draft them, Dorsey seems intent on ending Cleveland’s longest-running football soap opera by selecting, with either the first or fourth pick of the upcoming draft, his view of the best quarterback on the board.

Had Brown done only that as GM, he might still be occupying what is now Dorsey’s office.

Because in the NFL, the quarterback is everything — with the head coach a close second.

Speaking of which, Friday was a good day for the Browns, but a shaky one for Hue Jackson, whose reputation as a quarterback whisperer took a beating with his handling of Kizer, to the point that Dorsey obviously had no qualms about quickly dropping the curtain on that brief but lamentable experiment by trading Kizer to Green Bay.

Furthermore, for the tricky position of bridge quarterback — wanted: someone good, but not TOO good — Dorsey chose Tyrod Taylor, over the chance to bid on free agent AJ McCarron, a favorite of Jackson, whose .031 winning percentage as coach of the Browns has never looked so emaciated.

Meanwhile, the new GM is winning the offseason, although there’s a lot of fixing and winning still to do. The Browns are still the Browns, and Dorsey knows it. He likely made three trades Friday because he realizes free agents, absent having to grossly overpay them, aren’t going to be clamoring to come to Cleveland.

Commentary: Remarkable, reliable Joe Thomas ranks among best to ever play for Browns
Analysis: Focus in free agency shifts after trades, but GM John Dorsey still has a lot of work to do