Joe Thomas retires after 11 seasons, recognized as one of best to ever play for Browns 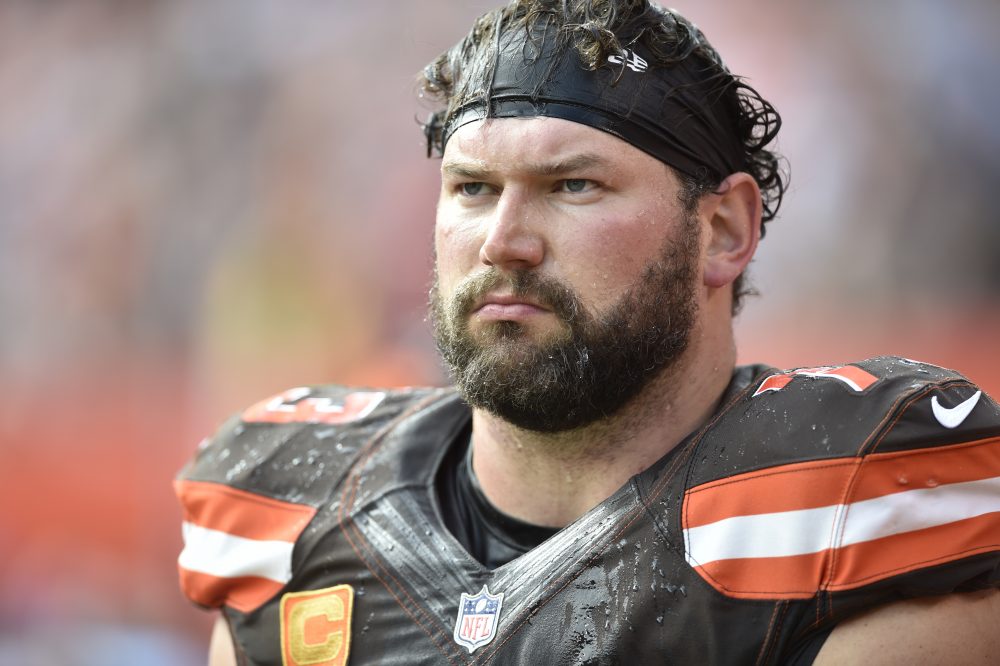 Thomas, the best player on the Browns since the organization returned in 1999 and one of the greatest in franchise history, announced his retirement Wednesday after 11 seasons.

“This was an extremely difficult decision, but the right one for me and my family,” Thomas said in a news release. “Playing in the NFL has taken a toll on my body and I can no longer physically compete at the level I need to.”

The tributes poured in on social media. He was one of the top left tackles in NFL history, a treasured teammate and a rare bright spot for a floundering organization.

He’ll have a retirement news conference Monday afternoon at team headquarters, and owners Jimmy and Dee Haslam announced they will enshrine No. 10,363 — the length of his record consecutive-snaps streak — in the team’s ring of honor during a game this season.

“We should all strive for the standard Joe has set to always be available, put the team above yourself and always give maximum effort,” the Haslams said.

“It’s been an amazing ride for the last 11 years.”

Thomas was the No. 3 pick in 2007 out of Wisconsin. He didn’t attend the draft, choosing instead to go fishing with his dad on Lake Michigan.

When he arrived in Cleveland he said he wanted to end up in the Pro Football Hall of Fame. The five-year clock can begin ticking on his induction in Canton.

Thomas, 33, joined Barry Sanders, Lawrence Taylor, Merlin Olsen and Mel Renfro as the only players in NFL history to make the Pro Bowl in each of their first 10 seasons. The first four are in the Hall of Fame.

Thomas was an All-Pro selection eight times, including six on the first team — 2009-11 and 2013-15. His 10 Pro Bowls are a Browns record, one better than Hall of Famers Jim Brown and Lou Groza.

Helleva career @joethomas73!!! Next stop Canton for you brother!! ? https://t.co/QtoT0DKUwP

“Congrats to @joethomas73, who taught me how to play Tackle and be a pro,” former Browns right tackle Mitchell Schwartz tweeted. “I would not be where I am today without his teachings, wisdom, patience, and friendship. He made it hard to leave Cleveland, and I’ll always remember his off-field qualities far more than his play. Thank you”

A bittersweet day for me today as I announce my retirement. Thank you to all of the; fans, media, coaches, teammates, and members of the Cleveland Browns organization. It’s been the best 11 years anyone could have asked for. https://t.co/ynCfeML6KC

Thomas made 167 starts and played 10,363 consecutive snaps to begin his career, believed to be the longest stretch in NFL history. The streak, and his season, ended abruptly Oct. 22 against the Titans when his left triceps tendon ruptured while he was blocking on a routine run play.

Thomas had surgery and said he wanted to wait until after the season to decide his playing future. He struggled with the decision and didn’t announce it until just two hours before the official start of free agency, but said he had informed the team of his plans and they chose to keep it secret as a competitive advantage at the start of free agency.

“This process has been challenging, but I feel comfortable with the decision that I made,” he said on “The ThomaHawk Show” podcast. “I’ve been keeping the Browns abreast of all of my process of making this decision. They’ve known about this for some time now.”

He’s battled knee and back injuries that limited his ability to practice over the last several seasons. The triceps wasn’t the issue in the retirement, but rather the wear and tear on his joints and the constant discomfort in a season. The knee was the deal-breaker.

“As much as I want to play and be a part of this new regime in Cleveland and the exciting things that are happening with the Browns, my body just has said no and I just don’t have it anymore,” he said.

Thomas has already begun a media career with the popular podcast, co-hosted by former teammate Andrew Hawkins, and is expected to work in TV this season. He’s interviewed with ESPN and Fox Sports and said he has another audition scheduled.

Thomas was always accommodating with reporters and became beloved by Browns fans. He made Northeast Ohio home for his family, and the region adopted him.

He is the only player in team history to earn the Walter Payton Man of the Year distinction multiple times (2010, ’12 and ’16), and was selected as one of three finalists for the league award in 2012. He was the team’s Salute to Service Award winner the last two years and his family was active in several local charities.

“From the moment I was drafted, the city embraced me in a way that I could never fully describe. I am proud to call Cleveland home,” he said. “The loyalty and passion of the fans is unmatched and it was an honor to play in front of them for the past 11 years. Even though I will be hanging up my cleats, I will always be a Cleveland Brown.”

His large yet down-to-earth personality and quirky sense of humor were more evident the longer he played. So was his loyalty, as he chose to stay with the Browns despite a string of losing seasons that never defeated his optimism.

The Browns won 10 games but missed the playoffs in his rookie season, then never had another winning record. The Browns went 48-128 during his career, as he played for six coaches and with 20 starting quarterbacks.

“Joe means so much to me both personally and professionally,” coach Hue Jackson said. “I appreciate everything he has done for this organization and not just on the field, his leadership and what he brought to the locker room. As a coach you couldn’t ask for a better captain than Joe Thomas.”

Thomas was due a $3 million roster bonus Sunday and a $10.3 million salary for 2018, the last year of his contract.

He leaves a huge hole on the line and in the locker room, and the Browns don’t appear to have a natural replacement on the roster.

New general manager John Dorsey did add depth to the line Tuesday, agreeing to a five-year deal worth approximately $37.5 million with Steelers right tackle Chris Hubbard. Shon Coleman, who started at right tackle last year but played left tackle at Auburn, could get the first shot at replacing Thomas.

The Browns reportedly tried to sign Patriots left tackle Nate Solder in free agency but he agreed to a four-year, $62 million deal with the Giants on Wednesday.

Thomas’ combination of technique, athleticism, intelligence and consistency made him one of the best offensive linemen in league history. His unparalleled reliability made him unique.

“It was a TRUE HONOR to have @joethomas73 as a teammate for 7 years!” Steelers cornerback Joe Haden said. “I honestly looked up to your work ethic and how you were the same person Everday! No matter record.Congrats on a hall of FAME career!! #1stballot”

Former OSU RB Carlos Hyde agrees to deal with Browns; move points to QB being the choice at No. 1
Hue Jackson excited to name QB Tyrod Taylor starter, says there will be no competition; Taylor wants to be “bridge” to Super Bowl