Joe Thomas says body couldn’t make it another season, “looking down barrel of a knee replacement” 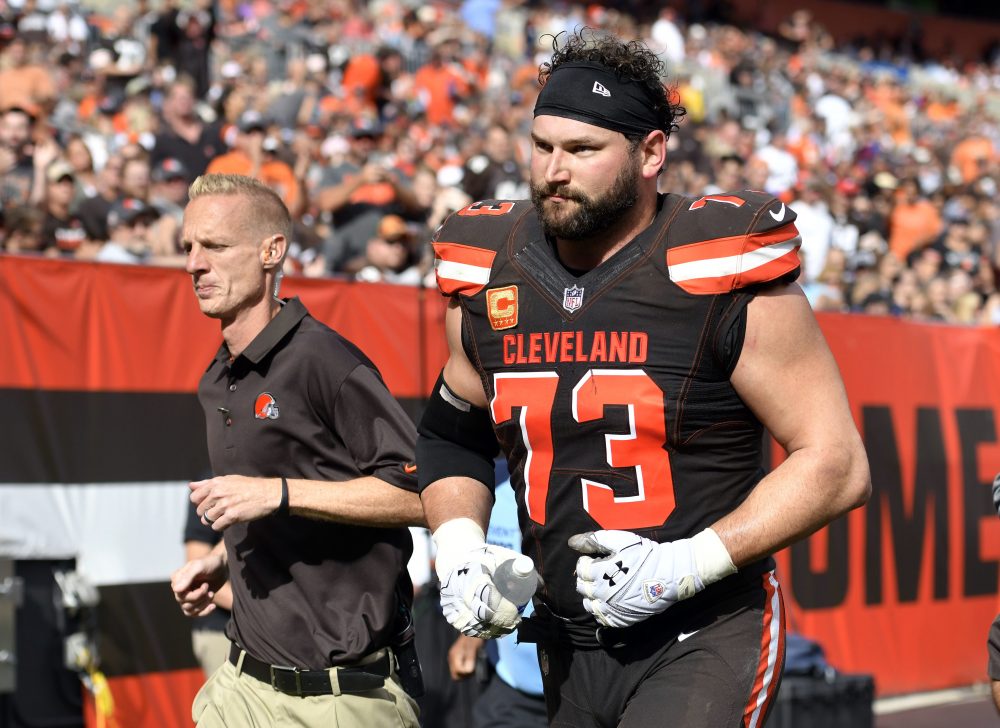 He could barely stand at all.

Thomas, a 10-time Pro Bowler in 11 seasons with the Browns, announced his retirement Wednesday, casting a pall on the official start of the league year and all the moves being made by the Browns.

The decision came down to his knee. After a lifetime of football had ravaged his body, it couldn’t handle another season.

“As a competitor, you always think that you can still do it, but there is a point in your career that you get to that crossroads and you say I just can’t do it anymore, I just don’t have it in my body,” he said on “The ThomaHawk Show” podcast. “My mind is good, but my body is not willing.”

Thomas, 33, said he had four knee surgeries in his career and described a scene last year before suffering a season-ending torn triceps in which he experienced “excruciating bone pain” in his knee and back after a couple of minutes standing at a podium talking to reporters, despite having taken a powerful anti-inflammatory, Vicodin and Tylenol.

“For me, looking down the barrel of a knee replacement, I think that definitely becomes a decision where you’re like, hey, this football has been amazing, it’s been more than I could ever have expected, but you have to take other things into consideration if you’re deciding if you’re going to be able to play football anymore,” he said.

Thomas didn’t practice much in the last several years because of knee swelling and back tightness after a bulging disc. He said he’d go through stretches where he couldn’t tie his shoe for three or four weeks and he’d have to get out of bed by rolling over and doing a pushup.

“I’ve had three knee scopes, ACL surgery, elbow surgery, countless ligament tears, muscle tears, arthritis in every joint in my body,” he said. “I would be the first guy in the building and the last guy to leave because it took me all day, literally, to get my body somewhat ready to be able to play on Sundays, and that’s only tenable for so long.”

I am humbled by the amount of people who have reached out and all kind things people have been saying. Thank you to everyone who has shown me support during this incredible 11 year journey! Go Browns!!!

Thomas had mentioned the physical toll throughout the last few years but said the knee was much worse in 2017. He had arthroscopic surgery in the offseason and said he barely recovered in time for the season and wasn’t sure he’d be able to finish the 16-game schedule before the unrelated triceps injury that ended his record consecutive-snaps streak at 10,363.

So another season wasn’t going to happen.

“No matter how much they were going to pay me, no matter how good the team looked, it was not a matter of me being upset at the organization, sick of losing, or my contract. I just don’t think I could do it anymore,” he said. “My mind is willing but my body says, ‘Enough.’”

Thomas called the retirement decision “bittersweet” and part of that is because he feels the team is headed in the right direction after going 1-15 in 2016 and 0-16 in 2017. He said it’s “going up fast” and will be relevant “a lot quicker” than people realize.

Thomas is expected to take a broadcasting job. He said he won’t take a full-time coaching or full-time front office job this year.

He will remain connected to the Browns.

“I’ll always be a Browns fan, they’ll always be my team,” he said. “I’ve talked with Jimmy Haslam and Dee Haslam and they want me to stay involved in Cleveland with the Browns.”

Position versatility a strength, not a problem, for Alabama DB Minkah Fitzpatrick, a candidate for the Browns to pick at No. 4
Joe Thomas retires after 11 seasons, recognized as one of best to ever play for Browns