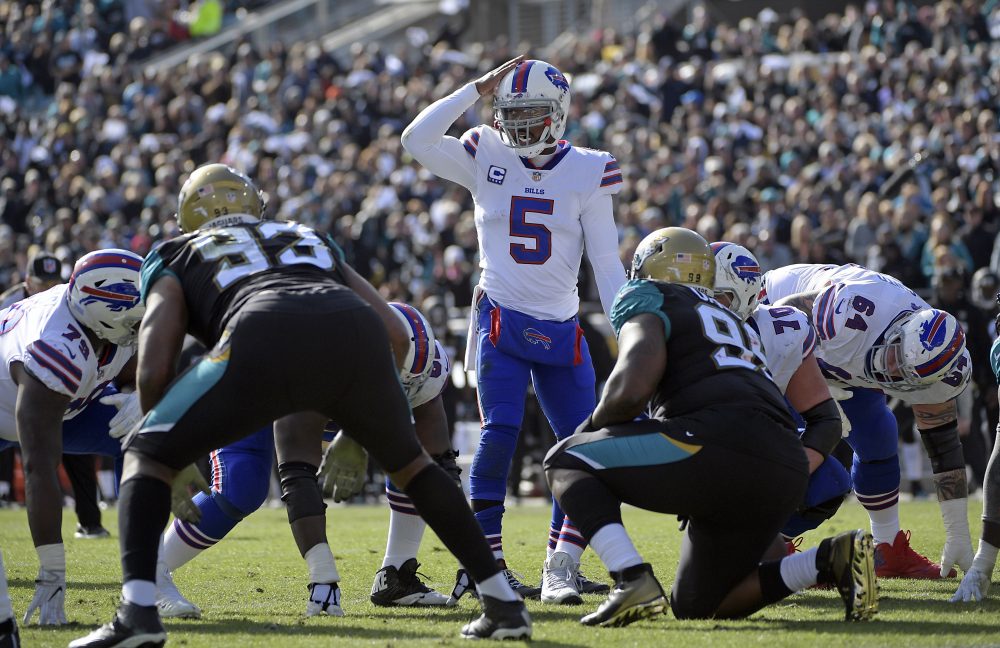 The Browns could finally talk about their new players.

Well, some of them.

Dorsey acquired quarterback Tyrod Taylor, receiver Jarvis Landry and defensive back Damarious Randall in separate trades. In all, he gave up quarterback DeShone Kizer, draft picks in the third (No. 65) and fourth rounds (No. 123) and a seventh-rounder in 2019 and agreed to switch 2018 fourth- and fifth-round picks with the Packers.


Nose tackle Danny Shelton and a fifth-rounder (No. 159) were sent to the Patriots for a third-round pick in 2019.

Taylor spent the last three years in Buffalo and became just the sixth quarterback in NFL history with consecutive seasons of 3,000 passing yards and 500 rushing yards in 2015 and ’16. He threw 51 touchdowns and only 16 interceptions for the Bills, going 22-21 and ending their 17-year playoff drought.

“We view Tyrod as a perfect fit to lead our team,” coach Hue Jackson said in the news release. “He’s smart, a leader and an efficient passer that doesn’t turn the ball over. The expectation is for Tyrod to come in and be our quarterback, get himself acclimated to our offense and help us get to winning as quickly as possible.”

Landry, 25, has at least 80 catches in each of his four seasons, totaling 400. No player in NFL history has more catches in his first four seasons, and he topped runner-up Anquan Boldin by 58.

“The numbers speak for themselves,” Dorsey said. “One hundred-plus catches two years, three-time Pro Bowler. Loves the game of football, ultra-competitor. You’re lucky to get a guy like that on your team.”

Randall, 25, played cornerback in Green Bay but will move to free safety, where he played at Arizona State.

“He’s a really good athlete that makes plays on the ball,” Jackson said. “He will fill a need for us and we feel he can make a difference for us in our secondary.”

Kizer went 0-15 last year as a rookie after being the No. 52 pick out of Notre Dame. He was last in the league in completion percentage (53.6), interceptions (22) and rating (60.5) and will become Aaron Rodgers’ backup in Green Bay.

“In my four weeks here watching (Kizer) play, I could see there was a learning curve, he was getting better and better,” Dorsey said. “In order to move this thing forward and to acquire someone like Randall, I thought it would be a natural move to let him continue to grow and help the Cleveland Browns continue to grow with Randall on the defense.”

The Browns plan to sign cornerbacks TJ Carrie and Terrance Mitchell, a league source told The Chronicle. They agreed to deals Wednesday and address a position of great need.

He agreed to a four-year, $31 million contract, Adam Caplan of SiriusXM Radio reported.

Carrie, 27, was a seventh-round pick in 2014 out of Ohio University. He returned punts and kickoffs for the Raiders.

Mitchell, who reportedly agreed to a three-year, $12 million contract, was a seventh-round pick of the Cowboys in 2014 and has played for three teams, starting 11 of 30 games.

The Browns are getting bigger, stronger and more experienced at tight end. The Browns will sign Lions tight end Darren Fells to a three-year, $12 million deal, The Chronicle confirmed.

Fells (6-7, 281) has started 37 of 54 games in three seasons with Arizona and last year with Detroit. He’s more of a blocker, with 57 catches for 713 yards and seven touchdowns in his career. In his season with the Lions, he had 17 catches for 177 yards and three touchdowns.

Fells, who will turn 32 on April 22, joins David Njoku and Seth DeValve in the tight end room. Njoku was the No. 29 pick in 2017 and DeValve a fourth-rounder in 2016. They’re former receivers still adjusting to tight end.

Shelton, the No. 12 pick in 2015, reflected on his three years in Cleveland in a social media post.

“I’m grateful for the opportunity to have played under great coaches and general managers who helped me grow as a player and as a man,” he wrote. “Thank you to the coaches, teammates, and brothers for these past three years. Finally, I want to thank the Dawgpound. Thank you for the fire that you brought to every training camp and game, and your dedication to the Browns. You were so welcoming to my family, and you will always have a special place in our hearts. Thank you for the memories Cleveland!”

Apparently the bad blood has passed. Randall posed for a picture with receiver Josh Gordon and posted it on Twitter.

Randall and Gordon traded insults on social media after they faced off in December.

** The team tendered restricted free agent defensive tackle Jamie Meder with the right of first refusal. The Browns can match any offer he receives but will get no draft pick compensation if he signs elsewhere.

Notes: DE Chris Smith expected to sign with Browns, per reports; Isaiah Crowell leaves for Jets
Notes: Moving on without Joe Thomas won’t be easy; Shon Coleman will get shot at left tackle