Joe Thomas isn’t sure what’s next, but knows he wants a role with Browns and to stay around football 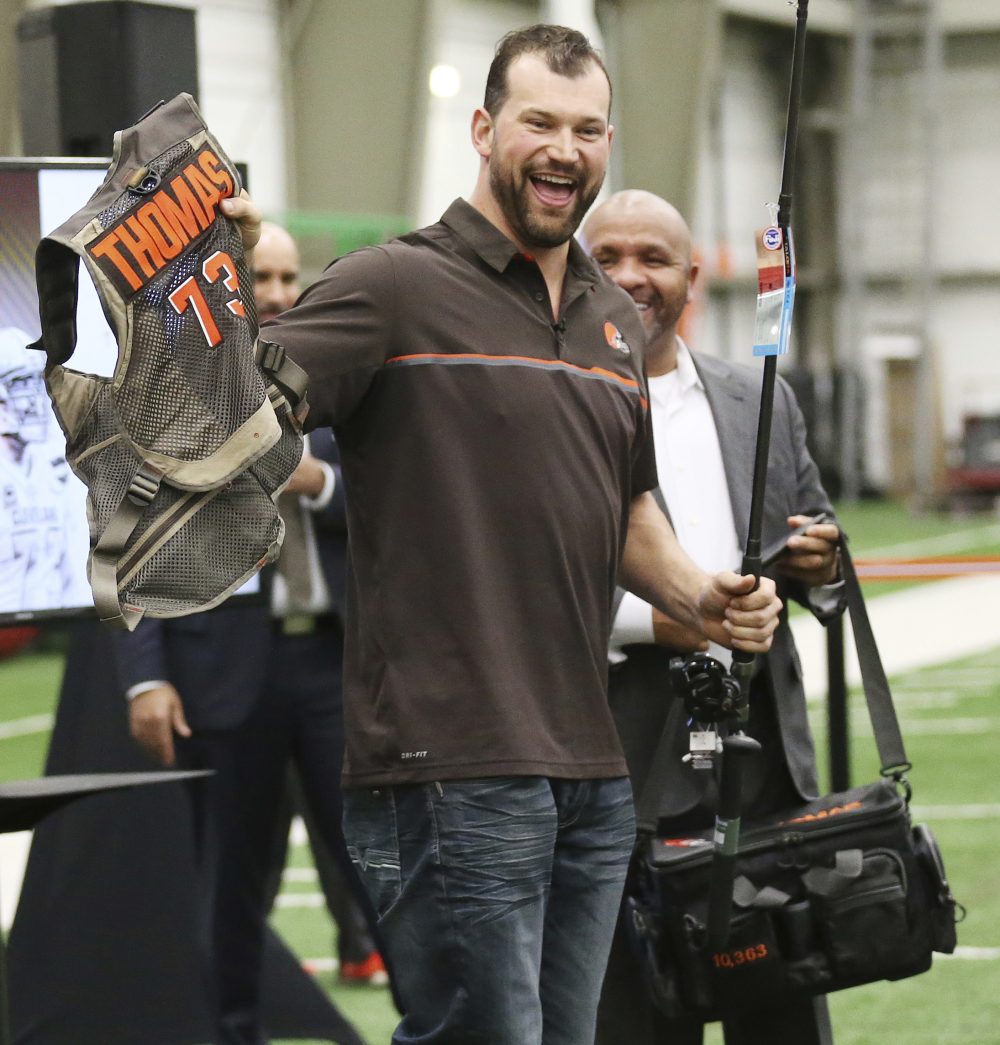 BEREA — Joe Thomas will remain connected to the Browns. He’ll be involved with football. He’s almost certain to be inducted into the Pro Football Hall of Fame when eligible in five years.

But when it comes to specifics, Thomas doesn’t know how he’ll spend his retirement.

“Do they have any jobs where you don’t show up and you get paid a lot of money? I want that one,” the 10-time Pro Bowl left tackle said with a laugh Monday at his retirement news conference. “I’m not sure. I definitely want to stay around the game. I think the longer you play football, the more it becomes part of who you are. The passion somehow gets greater.

“If you would have told me as a rookie that I would love football and the game and playing it and everything about it more now than even when I was in high school or even in middle school, I probably would have said you’re lying, but it really becomes who you are and it becomes so much a part of your life. I think that’s why so many guys struggle with the transition from player to post-career.”

He likes the idea of coaching, just not the 20-hour days of NFL coaches.

“I respect the heck out of these coaches because there’s no way I could spend the amount of time that they do as a coach,” he said. “But I’d definitely like to try to stay around the game coaching players individually, maybe do some broadcast work, do a few things with the team here.

“I want to be, even though I won’t be on the field, somebody that can be a positive representation for the Cleveland Browns and help them in any way I can without being on the field.”

He said he’ll hopefully meet with owners Jimmy and Dee Haslam in the offseason to figure out a role, besides self-proclaimed “No. 1 fan,” which he already claimed. A reporter joked that Thomas wanted to be Doug Dieken, the former left tackle and No. 73 who’s the team’s radio analyst and a goodwill ambassador.

The first stop in retirement will likely be a TV gig. Thomas auditioned for ESPN and Fox Sports and said last week he had another scheduled.

“There’s a few opportunities that I’m exploring right now,” he said. “I’m keeping all my doors open and going to look for something that’s the right fit for me and my family.

“Part of the things that I’m excited about with this retirement — obviously I’m really sad that I’m done with playing football — but I’m really excited to spend more time with my family. So whatever happens in the next phase of my life, I’m really looking forward to finding something that will fit with what I hope to expect with my family life.”

Thomas made his home in Northeast Ohio during his career with his wife and three kids. They’re headed back to Wisconsin but didn’t rule out making the Cleveland area his permanent home.

“We love it here in Cleveland. The plan right now is not to live here year-round,” he said. “My parents, my wife’s parents, all of our families are in Wisconsin. And as you can see, my kids are a handful so we need as many babysitters as possible.”

Thomas said he wants to take a year before making any big decisions. He’s talked to former players and the union, who’ve advised it takes about a year for a retired player to figure out his “next passion.”

Thomas earned a break from the grind. When he was the No. 3 pick out of Wisconsin in 2007 he said his goal was to have a Hall of Fame career. He then played 11 years with a staggering streak of 10,363 consecutive snaps to open his career.

“I’m not sure I was ready to write myself into the Hall of Fame, but I definitely knew that that was my goal. That was what I was going to focus on from Day 1,” he said. “Obviously, you’re not going to make the Hall of Fame in one year, but I think it was important for me to come into my career as a rookie and keep my mouth shut and my eyes open, of course, like any good rookie but also keep the sights high.

“I wanted to make sure my goals were as high as they possibly could be, so that if for some reason I fell a little bit short at least I could always say that I shot for the best, I tried to be the greatest, I gave it my all, I did everything I possibly could and I never sold myself short.”

He made quite an impression right from the start.

“Not only are you a tremendous player, you are a tremendous person,” said Romeo Crennel, his first coach with the Browns. “Being able to live your dream and stay true to your heart is not always easy to do. You did it from start to finish. The importance of your family on draft day to the truth of the standard you have set for yourself as you step aside are shining examples of the person that you are.”

Hue Jackson excited to name QB Tyrod Taylor starter, says there will be no competition; Taylor wants to be “bridge” to Super Bowl
Joe Thomas says goodbye with a lot of laughs and heartfelt appreciation for Browns fans