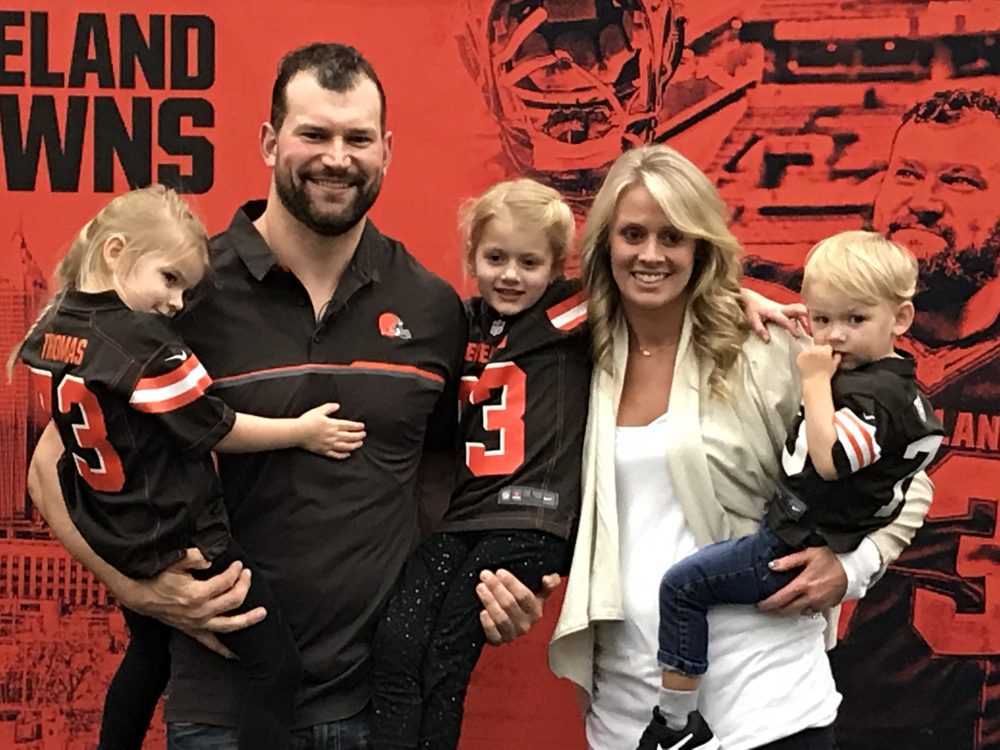 BEREA — Joe Thomas turned his retirement news conference into an audition for late-night talk-show host. Nobody was off-limits as the All-Pro left tackle took good-natured jabs at former teammates, coaches and Browns executives.

When he was done with the punch lines, he got serious and thanked the same people. Then got emotional discussing Browns fans.

“You guys were the ones that took me in as one of your own,” he said Monday. “The grit, passion, toughness and determination that you display on a daily basis is an inspiration for myself and for all of my teammates and all of the people that wear ‘Cleveland’ across their chest. You guys taught me what it means to be a Clevelander.

“Playing in front of the greatest fans in the NFL is easily the greatest honor that I have had in my 11-year career. I hope I was able to make you guys proud in the way that I was always proud when I told people boldly that I am a Cleveland Brown. The excitement I had for my team and my city never wavered, no matter what the circumstances. It is with all of this that I must say goodbye.”

He choked up and took a sip of water to get through the thank-you. He also wiped away a tear when told the local beat writers had renamed the player of the year award in his honor. He was a two-time winner, 2014 and ’16.

“Goodbye not because I am retiring but because I am merely changing jobs — from being your left tackle to being the No. 1 fan of the Cleveland Browns,” he said.

Thomas, 33, was always a combination of dedicated, durable, dominant tactician on the field and lovable, funny, interesting goofball off of it. He showed both sides in his 17-minute speech.

General manager John Dorsey and coach Hue Jackson presented Thomas with a fishing rod and No. 73 fishing vest from owner Jimmy Haslam, bringing his career full-circle. He skipped the NFL Draft in New York in 2007 — the Browns took him No. 3 — to go fishing with his dad on Lake Michigan.

The gesture and gifts didn’t spare Jackson and Haslam from being part of the roast. Haslam for his quick trigger with coaches and Jackson for his vow to jump in the lake if the Browns didn’t improve after going 1-15 in 2016 — they went 0-16.

“Of course, another moment I will never forget is the Rob Chudzinski era,” Thomas said. “Both of those days were outstanding.”

“The reality is I just felt that for me the time was right to retire because I knew that Hue was going to make the rest of the team jump in the lake with him this year, and I didn’t think I would be able to handle it,” Thomas said. “I am not as tough as I used to be.”

“Despite the lack of team success and constant change, Joe remained steadfastly positive — always pushing the Browns forward,” Pettine said. “It’s hard to be in a bad mood around Joe — and believe me, I tried.”

Thomas loves a good laugh, but the string of one-liners — he referenced Ray Farmer’s texting suspension, Kyle Shanahan’s PowerPoint presentation to let him out of his contract, Brandon Weeden getting trapped under a giant American flag and Johnny Manziel’s money phone — also served to keep him from getting too emotional in his farewell to the city and organization he made home for 11 years.

He said he went through a lot of boxes of tissues last week with all the congratulatory messages and touching tributes after he announced the decision to retire Wednesday.

“Of course, something I will tell to maybe my kids some day is when I got to 10,000 straight snaps and LeBron James tweeted at me,” said Thomas, who attended the Cavs game Monday night and got a big hug from James on the court. “Of course, when I retired, he tweeted at me again. I would like to tweet back at him some day. Hopefully, that is not for a long time because I still love watching him play.”

The fieldhouse was filled with coaches, teammates and team employees in “No Ordinary Joe” T-shirts. Haslam introduced Thomas and ran down his Hall of Fame-worthy list of accomplishments that include 10 Pro Bowls, eight All-Pro selections and 10,363 consecutive snaps to start his career, before a torn triceps Oct. 22.

“Five years from now, all of us in this room will make the trek down to Canton where I feel very, very certain that Joe will be inducted as a first-ballot Hall of Famer into a position he richly deserves, along with the other greats of the game,” Haslam said.

Sitting in the front row were Thomas’ wife, Annie, daughters Logan and Camryn and son Jack. They were temporary audience members, as Jack wanted to grab the helmet logo and wear it and Logan tried to join Daddy on stage before leaving to go play.

“She has been my rock since Day 1, and I can never repay her for those long games with her fingernails in her mouth, worried not exactly if I do my job but just hoping that I did not get hurt. I appreciate that so much,” Thomas said of Annie.

He recalled some of the favorite moments in a career without a playoff appearance and too little winning — Josh Gordon’s record receiving year in 2013, Phil Dawson’s field goal off the goal post stanchion in Baltimore in 2007, a record-setting win in Kansas City in 2009. He thanked just about everyone who’s worked for the Browns but singled out former offensive line coach George Warhop and former center Alex Mack.

“George Warhop had a big impact on my career as a player,” Thomas said. “He helped me take my game to the next level.

“(Alex Mack) was younger than me but just watching him practice and watching him prepare and just the friendships and the good times that we had, I think he was a guy that probably had another huge impact on my career.”

He used the platform to thank three childhood friends from Wisconsin — Luke Homan, Steve Johnson and Ben Strickland — for getting him into sports and stoking the passion that made him one of the greatest athletes in Cleveland history.

“They instilled in me what it means to have passion and focus on a single goal on the athletic field,” Thomas said. “They were as integral a part of my career as anybody that I have met since then.”

He retired because the knee that prevented him from practicing the last several years couldn’t survive another season. He didn’t hesitate when asked what he’ll miss the most.

Joe Thomas isn’t sure what’s next, but knows he wants a role with Browns and to stay around football
Man says receiver Corey Coleman led alleged assault