Nick Saban says DB Minkah Fitzpatrick has the personality, drive and talent to be a big hit in the NFL 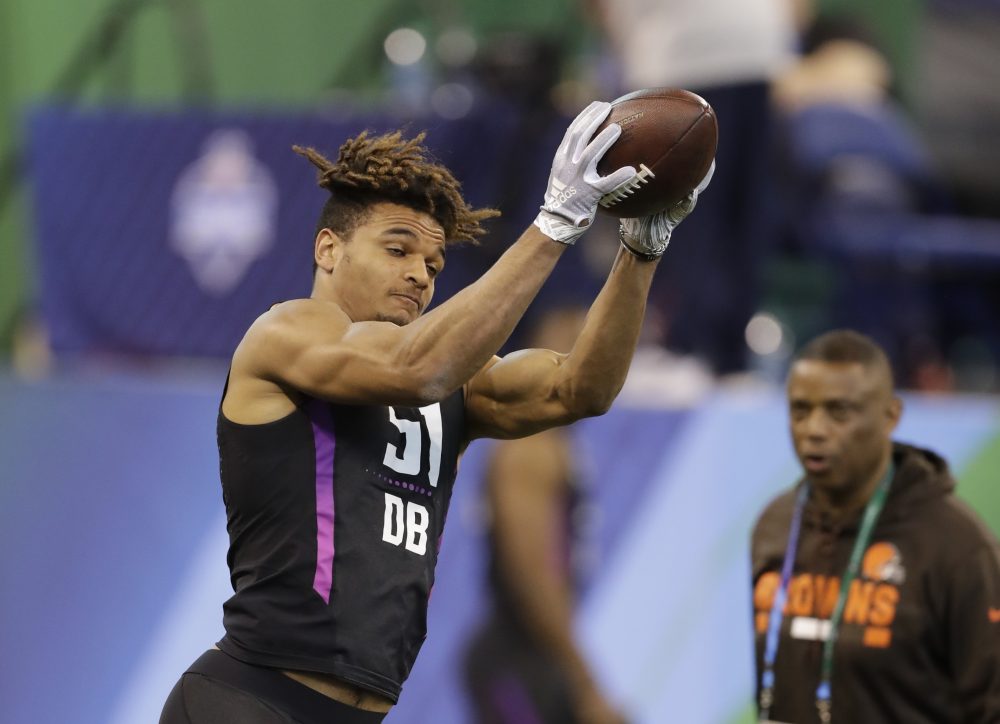 The words and phrases used to describe Minkah Fitzpatrick are synonymous with his Alabama coach.

Did Nick Saban find a personality clone in the talented, versatile, determined defensive back from New Jersey?

“I wouldn’t put that on anyone,” Saban told The Chronicle-Telegram in a phone interview Friday. “He’s better than me in a lot of ways.”

He wasn’t talking about playing ability, but that’s certainly true. Saban didn’t play in the NFL, and Fitzpatrick is expected to be a top-10 pick April 26. He should be in the discussion for the Browns with the No. 4 selection, along with North Carolina State defensive end Bradley Chubb, Penn State running back Saquon Barkley and Ohio State cornerback Denzel Ward.

“He’s a great player. Versatile. Smart. He has a lot of instincts,” Crimson Tide safety Ronnie Harrison said at the scouting combine.

Teammates call Fitzpatrick “Coach Saban’s son” because his play consistently makes Saban smile. That’s not all that penetrates the gruff and rough exterior.

Fitzpatrick can even make the six-time national champion laugh.

“He can do it. It’s not a tough thing to do,” Saban said. “I enjoy the players and their personalities. You guys created that image of me.

Saban isn’t alone in his elevated opinion of Fitzpatrick. Someone inside the Alabama program called him a “one-in-a-million kid.”

“You will not find a better person. The guy’s got tremendous character,” Saban said. “He was never in my office once for doing the wrong thing. He’s very responsible. He’s a good citizen, a good leader.”

Any team is glad to add someone solid off the field, but the real value is when it translates to performance.

“He’s kind of a unique guy,” Saban said. “A lot of times talented guys don’t have overachieving personality types. He wants to be the best and goes out and works hard every day.

“He’s the exact model you love to have as a coach. The guy is very talented. He’s smart, bright, can learn. He really competed to be the absolute best at what he does. I don’t even know if I can describe him well enough.”

Fitzpatrick (6-foot-1, 201 pounds) seemed like an obvious choice for the Browns when the draft process started. The buzz has died down a bit with the increased possibility of Chubb still being available at No. 4 and general manager John Dorsey making a series of moves to enhance the secondary.

The Browns remain without an obvious No. 1 corner, and that’s where the conversation regarding Fitzpatrick has shifted. He arrived at Alabama as a cornerback but was used more often in the slot and at safety because that’s where Saban needed him.

The versatility is handy, but Dorsey might want to be convinced he can succeed at outside cornerback, especially if he’s spending the No. 4 pick. The other option would be starting outside and shifting inside against three-receiver sets, which are increasingly common.

Fitzpatrick believes he’s up to the task.

He played all six secondary positions for the Tide, and Saban said he was good at all of them.

“I always thought he made a lot of plays with his eyes. It was one of the reasons we didn’t keep him playing corner was there are less opportunities to make plays with your eyes when playing corner, looking at your man,” Saban said. “He’s a really good athlete, a cover guy and physical enough versus the run.”

Saban said Fitzpatrick has the tools to play corner at the next level.

“He’s got good feet, change of direction, really good ball skills, very instinctive in reacting, reading the guy’s body and knowing what he does best,” Saban said. “He’s confident and has good speed and good size. That allows you to be good.

“I think he’s good in a lot of things. I wouldn’t disagree with him about man to man, but I think he’s also good at doing other things. He’s a good blitzer, good zone player, good at breaking on the ball.”

Coming off 1-15 and 0-16 seasons, the Browns can’t go wrong by taking the best player available, regardless of position. And with the roster remaining under construction, it’s too early to know where Fitzpatrick could be needed, so his versatility could be a bonus.

They can also use players who improve the attitude and work ethic, and Hall of Famer Ray Lewis called Fitzpatrick a “culture changer” during an interview on Fox Sports.

“I know he’ll set a great example,” Saban said. “He’s definitely a guy other people can emulate. If they’re smart, they will choose to do it. That’s a step in the right direction.

“He wants to do well. He knows what it takes to do well and is willing to do it. He makes good choices and decisions to accomplish the goals he has. And he has the self-discipline to make it happen.”

“If he sees you lacking, he’s going to let you know that you’re lacking,” Payne said. “He just wants the best out of you.”

And out of himself.

“I’m still just a kid from New Jersey that’s athletic and gifted by God with some talent,” he said. “I just work hard. Me and my family work hard.”