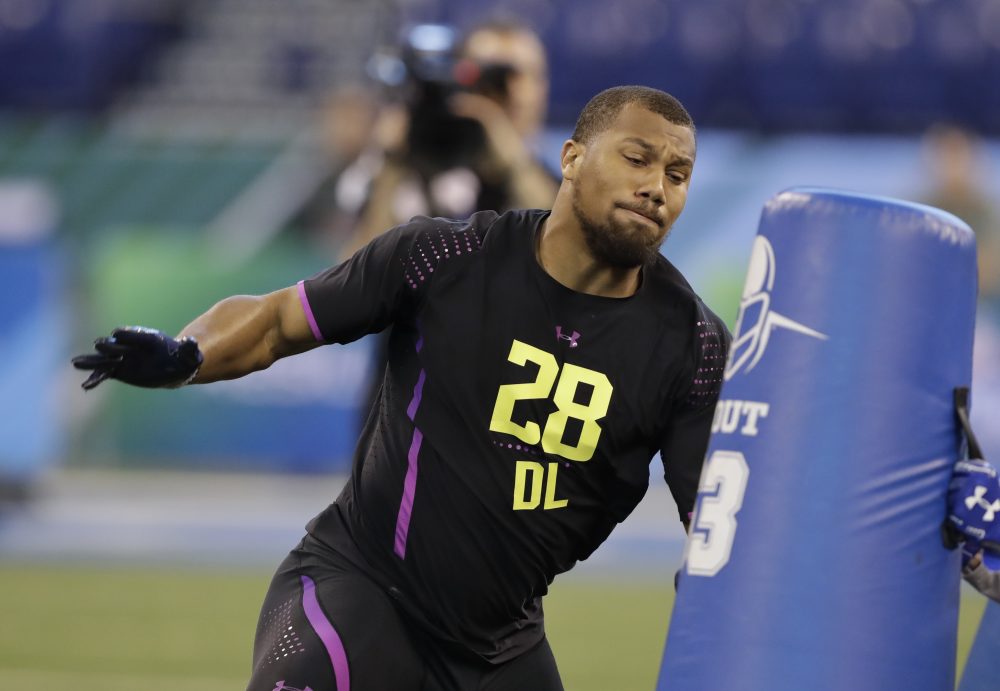 Q: Is there any chance, any chance, that GM John Dorsey goes Saquon Barkley and Bradley Chubb at 1 and 4, then trades back before New England to take Mason Rudolph? And will they take a second QB later?

A: One in a million. “So you’re saying there’s a chance.”

Your two-quarterback scenario has a much better chance. The trade of Kevin Hogan to Washington opens a spot for a rookie fourth quarterback, who would ideally be placed on the practice squad. He could be picked in the later rounds.

A: You’re not wrong. But the inability of the front office and coaching staff to identify a franchise quarterback has led to the constant change. The right quarterback will lead to stability throughout the organization, because he will win games.

I’m not sure that applies to Brady, however. As a sixth-rounder in a dysfunctional organization, it’s fair to wonder if he would’ve ever gotten a long enough chance to show the incomparable player and winner he is. Having said that, I believe Brady’s too good and too driven to not have succeeded eventually — it just might not have come with the Browns.

Q: For the love of everything, please tell me Josh Allen will not be drafted by the Browns.

A: That’s not really a question, but I’ll indulge you.

I think you’re safe. I expect it to be Sam Darnold. But I will admit the recent buzz had me second-guessing myself for a while, so you may not want to rule it out completely.

Q: In light of a physical voiding the C.J. Smith trade with Seattle a few weeks back, I wondered just how subjective a medical evaluation can be? Are some teams more notorious than others when it comes to giving the OK?

A: I went to high school with a guy named Philip Suchma. Small world.

You pose an interesting question. The physicals are subjective, which is why one trade will be nullified and another accepted involving the same player. If a team really wants a guy, he’ll pass the physical.

Subjectivity also comes into play when the receiving team’s situation changes after an agreement’s been reached. Case in point is Baltimore voiding the deal with receiver Ryan Grant, citing a failed physical, after Michael Crabtree became available.

Q: Patrick Mahomes is short, an air-raid offense product, confident and had a high completion percentage similar to Baker Mayfield. I got it, he has a big arm like Josh Allen, but does Mahomes actually compare better to Mayfield, who GM John Dorsey watched a lot of during the season?

A: I get your point, and it’s not off base. But I think the separator for Mahomes and Allen — the only reason they’re top-10 picks — is because of the rare arm strength they possess. Allen and Mahomes are also more athletic and improvisational than Mayfield.

The systems, size and confidence do line up for Mahomes and Mayfield.

Q: Let’s say GM John Dorsey has had some idea who the Browns will pick at 1 while putting Tyrod Taylor at QB and setting up Jarvis Landry for years as a possession receiver. Which rookie do you think he has in mind?

A: Accepting your premise, Sam Darnold would be the best fit. He’s only 20 years old, would benefit from a year sitting and watching and his accuracy would work well with Landry, sending him on the way to another 100-catch season.

The worst fit would be Allen. It wouldn’t make sense to waste his big arm, and call attention to his lack of accuracy, by asking him to force the ball to Landry on underneath routes.

I will add that I’m not sure the Taylor signing or Landry contract extension will have any bearing on which quarterback is drafted. I don’t think Dorsey had decided on a quarterback when he traded for Taylor and Landry last month. Taylor was the best attainable veteran option, and the acquisition of Landry came the assumption of a big-money extension.

Albert and Charles are, of course, former Chiefs drafted when Todd Haley was head coach and likely familiar to GM John Dorsey, as well, from his time there. Haley also worked with Floyd when in Arizona.

Each plays a position of questionable stability, has had measurable NFL success, is available, affordable, hungry to re-establish himself as a viable contributor and of known value to key Cleveland decision-makers.

A: As you know, the team’s need at those positions will be determined by what they do in the draft. But assuming there’s still room on the roster, let’s take a look at all three.

My assumption is Albert’s recent arrest rules him out. He was out of the league last year, so he would’ve been a question mark to begin with, and the arrest likely makes him too much trouble — despite the need to have multiple options to replace Thomas.

I’ve always liked Charles and am open to the idea, but I expect the team to draft a running back in the second or third round, removing the possibility. If not, I’d bring him in for a spin, even though he has only 152 rushes in the last three years and is 31 years old.

As for Floyd, his off-the-field issues and lack of production last year in Minnesota concern me. He looks like another Kenny Britt, particularly as a potential locker room distraction.

Mailbag: Best RB fit not named Saquon? More trades coming? A left tackle in 2nd round?
Mailbag: Lamar Jackson in the top 15? Which QB to Browns? Denzel Ward at 4?