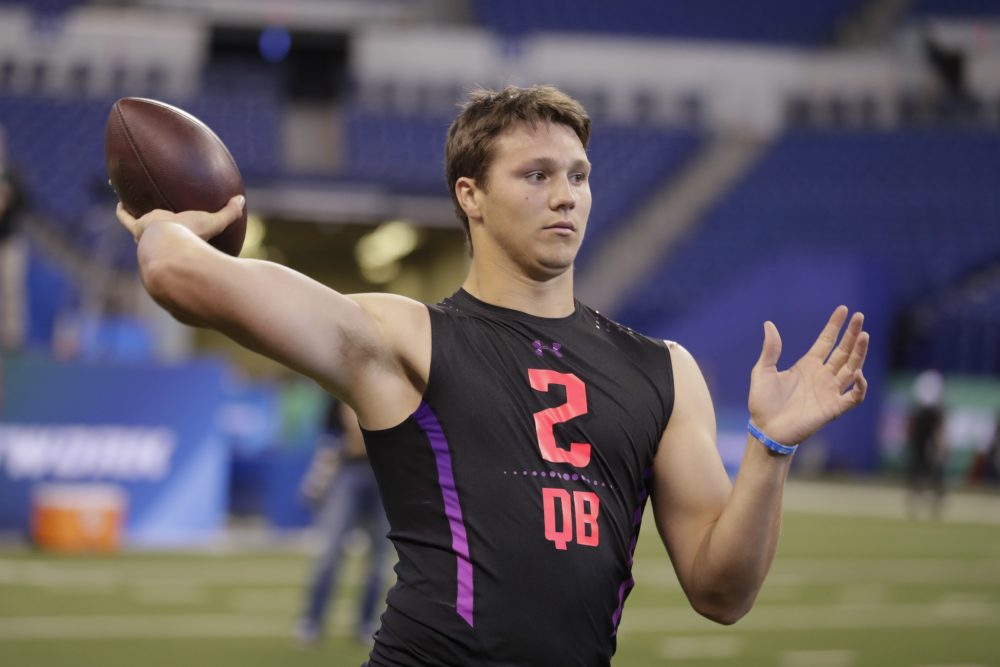 Fans fearful the Browns till take Wyoming quarterback Josh Allen with the No. 1 pick could be in for a long last week before the draft.

Former Browns general manager Phil Savage is the latest national voice to change his mind and slot Allen to the Browns.

“If you asked me that a week ago I’d give you a different answer than I’m going to give you right now,” Savage, executive director of the Senior Bowl and a SiriusXM Radio analyst, said Wednesday on a conference call. “But in my estimation, with Tyrod Taylor being in place as the starter for 2018, I think they do have time to work or develop behind the scenes one of these quarterbacks that they take. And in that division, in that environment weather-wise, AFC North, I think it could conceivably be Josh Allen when it’s all said and done.”

Savage’s prognostication is about potential over production. In two years as the starter at Wyoming, Allen (6-foot-5, 233 pounds) threw 44 touchdowns and 21 interceptions while completing just 56.2 percent.


“He’s the biggest body of all those guys. He’s played in cold weather,” Savage said. “To me, the evaluation on him is not really what he would give you this coming weekend but what he’s going to give you 18 months from now. To me, he’s got the highest upside, maybe, but he’s got the most room to grow amongst the four quarterbacks that are here at the top of the draft.”

Gil Brandt was the vice president of player personnel for the Dallas Cowboys from 1960-1989 and is a SiriusXM Radio host. He wouldn’t rank Allen, USC’s Sam Darnold, UCLA’s Josh Rosen and Oklahoma’s Baker Mayfield but gave his reviews.

The quarterback class has been picked apart, with much of the focus on the flaws of the top guys, but ESPN draft analyst Todd McShay said it’s being undersold.

“This is one of the best classes that I’ve ever evaluated from a talent standpoint when you’re talking about the top of the draft,” he said on a conference call. “I think Cleveland is going to stay there (at No. 1) and take either Sam Darnold or Josh Allen. More people in the league I talk to are saying Josh Allen now, but until John Dorsey has said it or the commissioner announces the name, you just never know.”

The Browns seem unlikely to take Penn State running back Saquon Barkley with the No. 1 pick, and that’s reportedly fine with his representation.

In a feature on Barkley, Sports Illustrated reported his handlers at Roc Nation, the agency founded by Jay-Z, don’t want him in Cleveland. They prefer Barkley go to the New York Giants at No. 2, so he can play in the major media market.

“That’s where you can become the Face of the League,” Ben Baskin wrote. “His manager even implored him to pull an Eli Manning and demand that the Browns not draft him.”

According to Baskin, Barkley never considered the option.

“For the last few weeks he has told close friends about a vision he has,” he wrote. “He believes that if he brings a championship to the Land, as LeBron (James) did, he’ll be hailed as the best athlete of his generation and have a statue built in his honor.”

“I can say on behalf of our entire team that we would be thrilled for Saquon to go to whichever team drafts him,” Miale told cleveland.com.

Barkley has a lot of fans among draft analysts and NFL scouts.

“I think he’s the best running back to come up through the draft since Adrian Peterson,” Brandt said, citing his quickness, speed, strength and character.

“This is the preeminent talent of Saquon Barkley, the do-everything back,” Savage said. “He’s got size, he’s got speed, he can catch out of the backfield, heck, he can even return kicks.

“I can’t imagine him slipping beyond (the sixth pick) regardless of who goes in those top three or four picks.”

Savage likes the idea of teaming defensive end Myles Garrett, last year’s No. 1 overall pick, with North Carolina State defensive end Bradley Chubb, a strong candidate to be Cleveland’s pick at No. 4 if he’s still on the board.

“To me, Myles Garrett was more of a right defensive end as a pass rusher,” Savage said. “Chubb in my estimation could definitely play on the left side, I think he’s a little bit better at the point of attack than Myles Garrett was at the same time. But not as elite coming off the corner as Garrett.

“So they actually would book end pretty well together.”

The Browns drafted Emmanuel Ogbah with the 32nd pick in 2016, so they would have three high picks for the two end spots. Ogbah or Chubb could move inside to tackle in passing situations to get all three on the field.

“So there may be some real value in terms of that consideration,” Savage said of drafting Chubb.